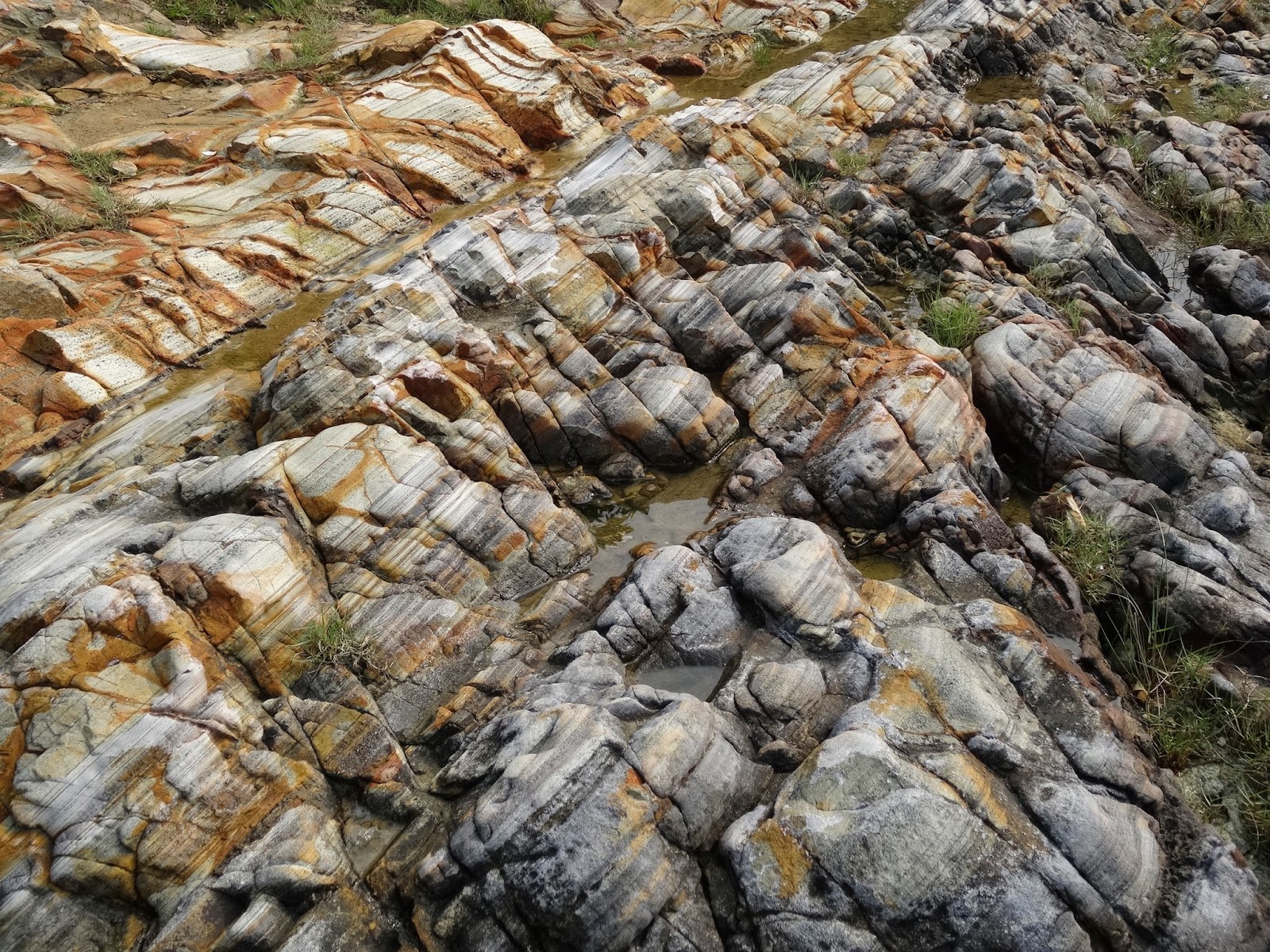 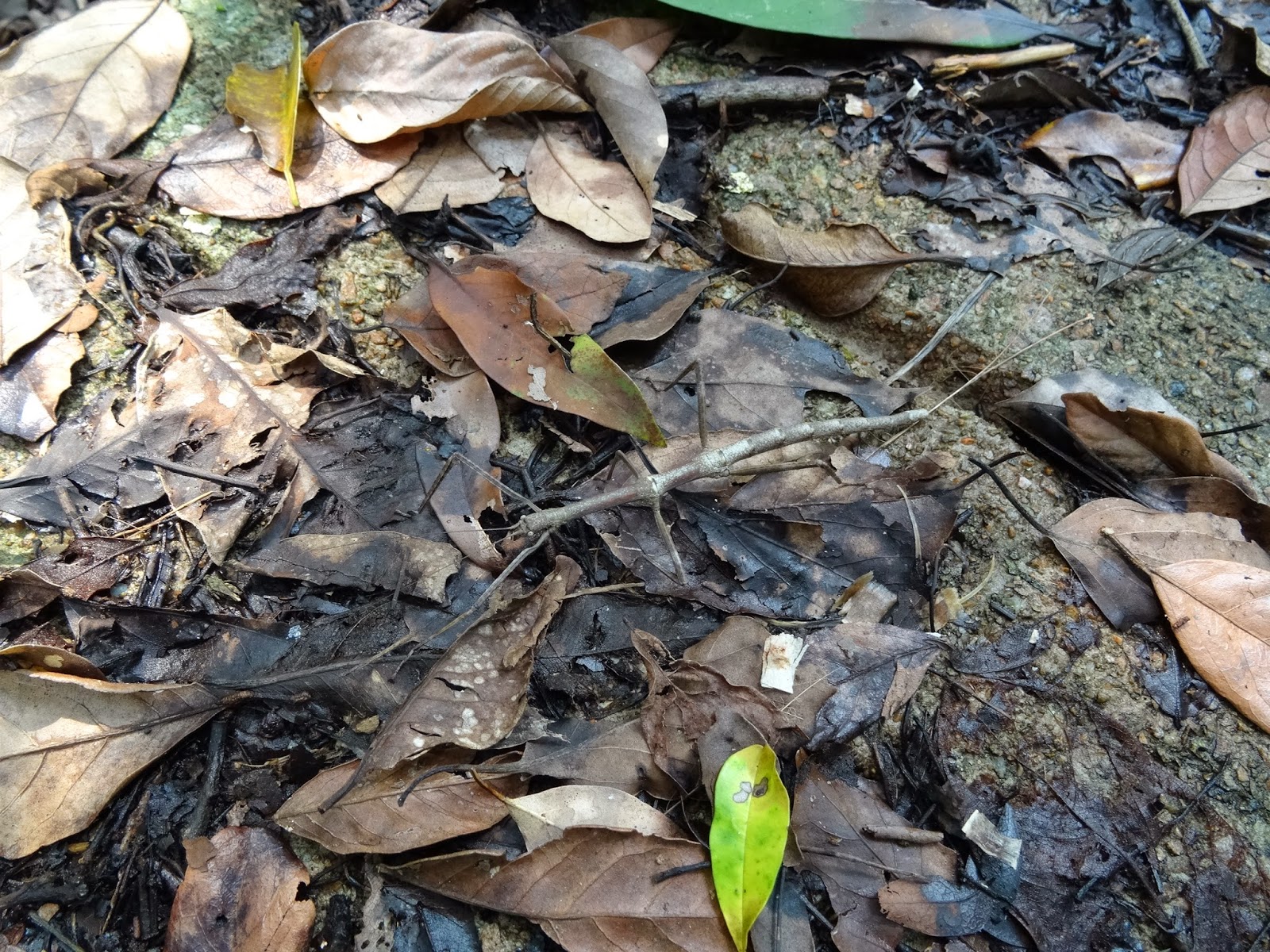 Can you spot the stick insect?
(One way to do so is to look for their beady eyes...) 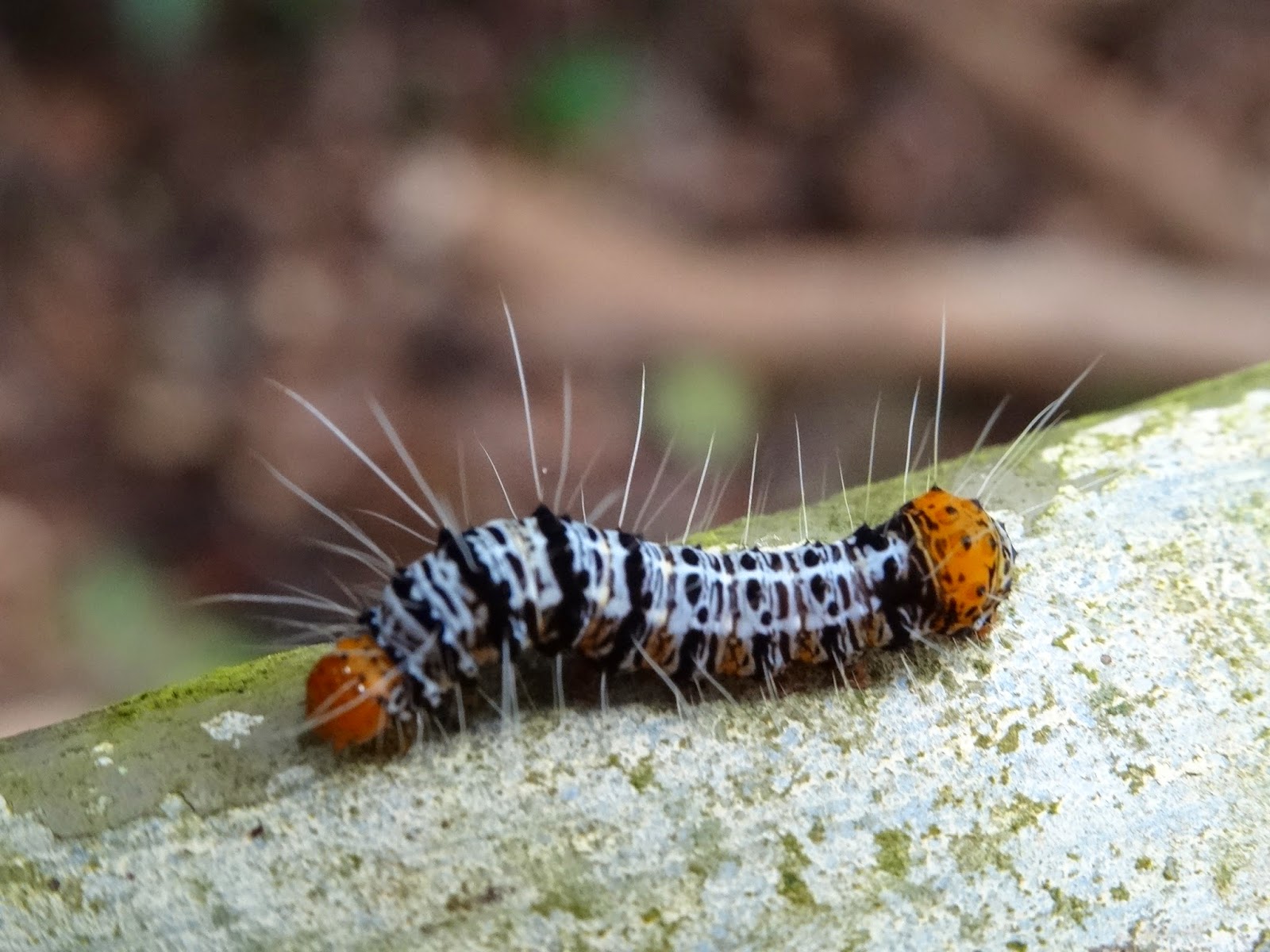 One of the many caterpillars spotted on today's hike 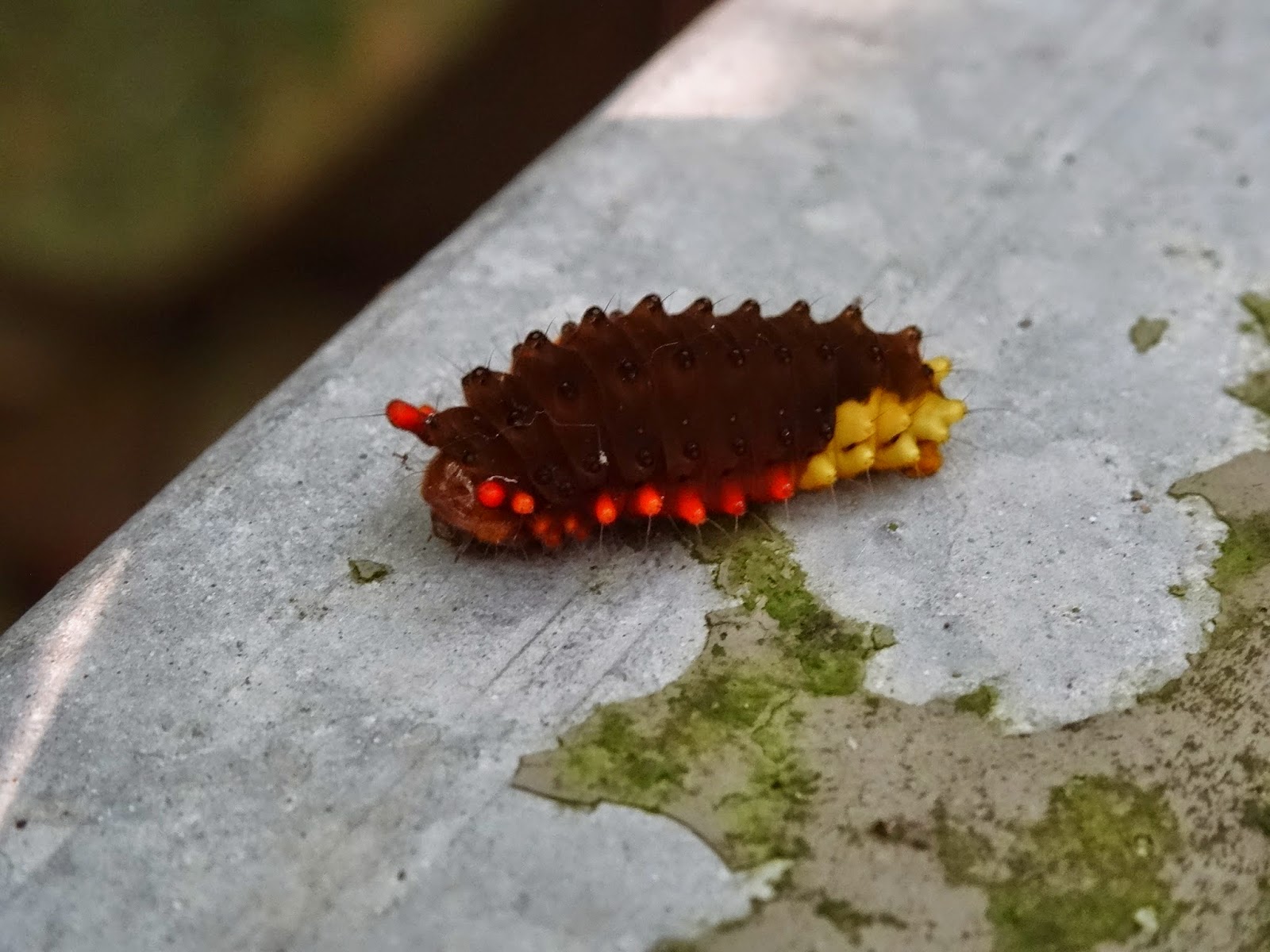 One of nature's creatures which I can imagine those who
design monsters for movies having drawn on for inspiration! ;b

I went on a very pleasant hike which began and ended at Hoi Ha Road, near Pak Sha O, to Lai Chi Chong with a friend earlier today. I've long wanted to visit Lai Chi Chong on account of its having interesting geological formations but long before we got to that coastal Sai Kung village named after lychee trees growing in the area, we already had been treated to our share of interesting sights -- particularly in the form of various cool critters.

In the fields in front of the picturesque village of Pak Sha O (which I've passed by once before), I spotted blue dragonflies and various species of butterflies galore -- as well as could hear the "barking" of various frogs which didn't deign to come out of hiding for me.

Then along the path between Pak Sha O to Lai Chi Chong, we came across a stick insect and various caterpillars along with various tiger beetles, spiders (including a huntsmand spider with a small moth in its mouth!), live moths, still more butterflies (and moths), what my hiking companion called "the boeing 747 of bumble bees" (which I sought to move away from rather than closer to photograph!), some crabs (yes, really) and some other less easily identifable insects!

In case it wasn't already clear: this hike was a real winner way before we got to Lai Chi Chong!  Upon getting to what really was just the midway point of our excursion (since we had to head back to Hoi Ha Road to catch a mini bus back into Sai Kung town), we eschewed a ride on a kaito which just happened to come by as we were walking along Lai Chi Chong's pier, preferring to spend some time along what's grandly referred to as the Lai Chi Chong Geotrail but, for all intents and purposes, is just the coastal area to the west of the pier!

Within a span of just a kilometer or so, we were able to see various types of rocks -- sedimentary and volcanic (because, yes, millions of years ago, there were volcanoes in Hong Kong!).  From a non-scientific perspective, certain rock formations got me thinking of the scales and spines of dragons while others look like they had been splashed with various paints while still others reminding me of sci-fi movie landscapes, only in miniature!

Visually interesting though they may be, the truth of the matter is that the Lai Chi Chong geological formations didn't feel worth going all the way just to see them alone unlike, say, with those over at Ma Shi Chau, Tung Ping Chau or Po Toi.  Instead, what made today's excursion really enjoyable for me were the many cool critter spottings -- plus, of course, the route taken being pleasant to walk along as well as the surrounding scenery being so pleasantly green and peaceful (the latter on account of there being a surprising lack of other folks along it as well as about in Lai Chi Chong today).  :)
Posted by YTSL at 11:45 PM

On your rock formation. I can spot a man and woman. The woman has an "Bee Hive" hair style. Like marge in Simpson.

Wow, I think your man and woman are harder to spot than the stick insect in the second photo from the top! ;O

Peppylady's comment about the rock is interesting. Stare at this rock formation long enough, and anthropomorphic shapes will form...The insect photos are some of your best. The stick insect looks perfectly camouflaged, the caterpillar and insect in the bottom photo could indeed fit into a fantasy or science fiction film.

Photography is often, for me, a catalyst leading to additional images in the imagination...Looking at your photos, I could imagine these insects (after removing from them any predatory instincts) as animated characters in Totoro's forest kingdom.

Wow... and I thought my imagination was already running wild when I imagined people painting lines on the rocks... ;b

Re your imagining the insects as animated characters in Totoro's forest kingdom: my hiking buddy thought of "Starship Troopers" when he saw the caterpillar in the bottom-most photo -- whereas I thought of the Ohmu in "Nausicaa of the Valley of the Winds"! ;b