Rainbow in the clouds 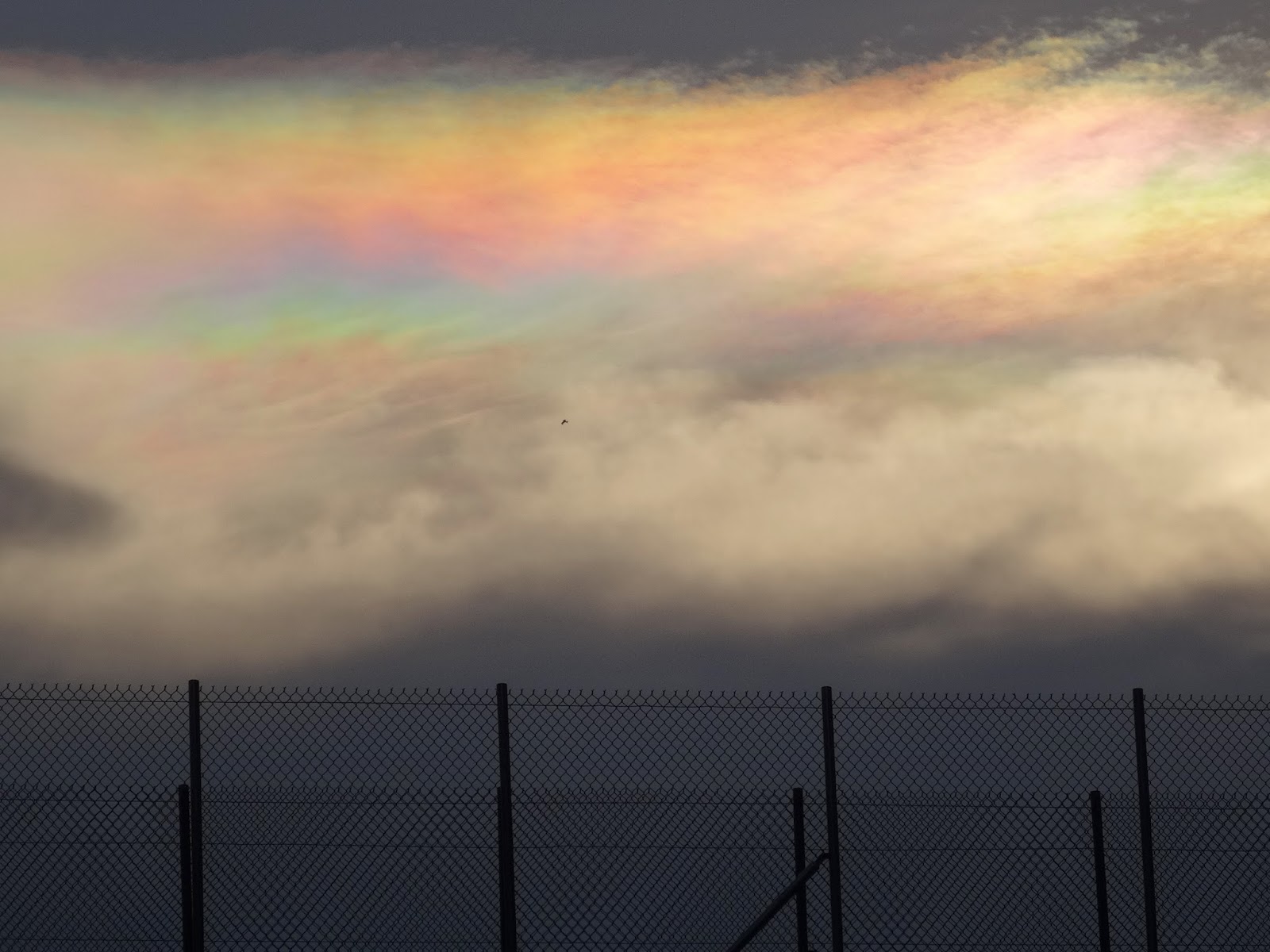 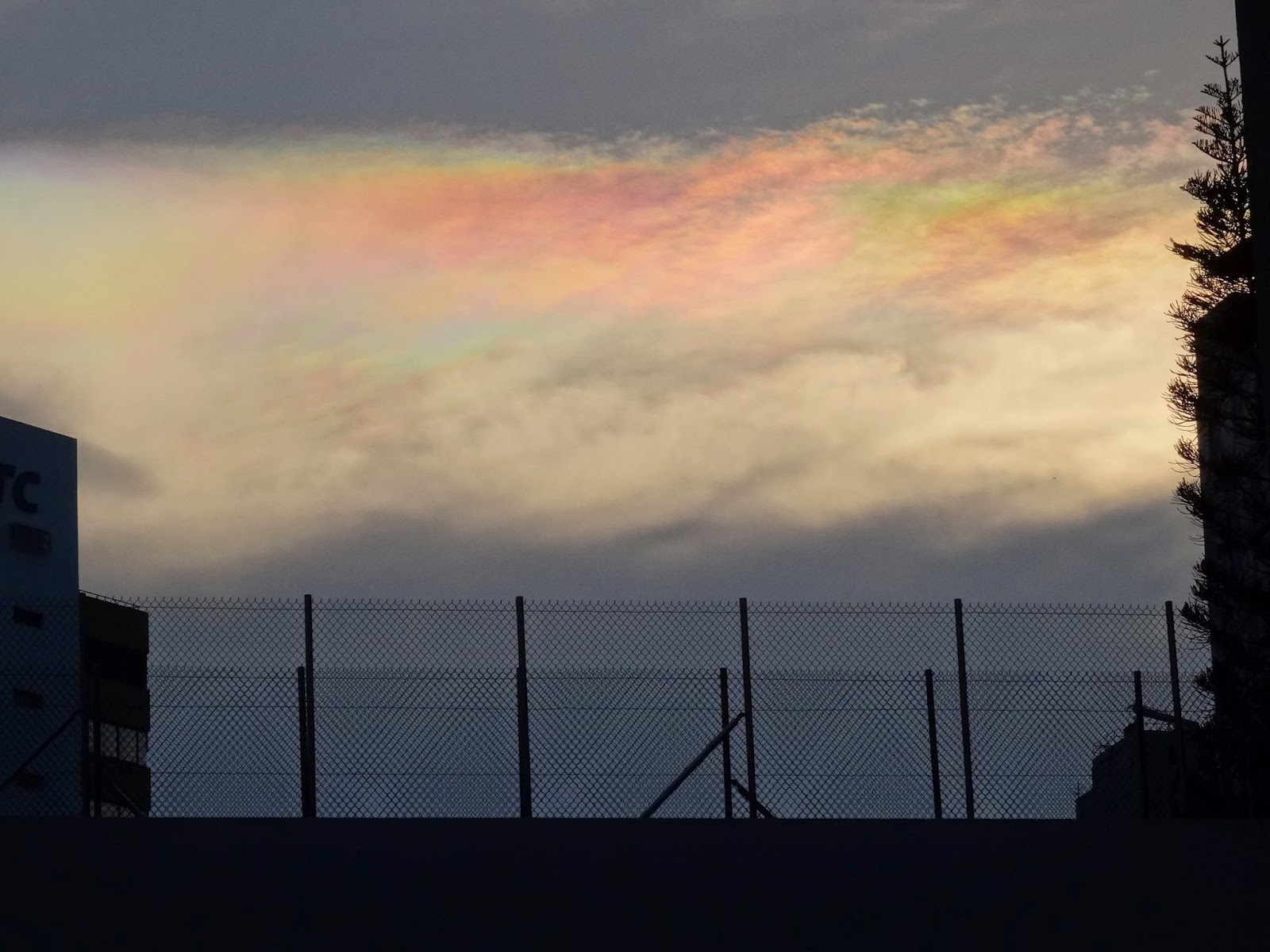 Please click on the image to view an enlarged version of it
(and truly, there was no Photo Shopping involved here!)

Today was one of those days during which I alternately was outdoors and then indoors a few times.  It also was one of those days that each time I was outdoors, I encountered short spells of showers along with dry periods with some sunshine.
You'd think that the conditions would be ideal for me to spot at least one rainbow in the sky but even though I did make a point to look, I didn't see any making an appearance today.  In contrast, the previous two times I've spotted a rainbow, they were on occasions and in places that I was not expecting to encounter any.
The earlier of these rainbow spottings occured on my visit to Kanazawa's Kenroku-en -- seemingly improbably in the waters being spouted by an artificial fountain!  Then, a few weeks after returning to Hong Kong, I glimpsed a rainbow-like band of colors in the clouds floating in the sky!!

My first reaction upon noticing that particular sight was to wonder if there was something wrong with my eyes.  But after blinking a few times and still seeing that amazing phenomenon, I quickly fished my camera out of my bag and started snapping a few photos.

Seeing me do so, a few passersby turned to see what was attracting my attention and started taking pictures of their own too!  Considering the amount of attention that the rainbow in the clouds suddenly was generating, I'm somewhat surprised that a photo of it didn't make it into the next day's newspapers -- and this especially as I spotted this phenomenon pretty close to a major newspaper's main office.
Perhaps, I figured upon further reflection, this phenomenon occurs more commonly than I realized -- only I just hadn't noticed it before -- and it's true enough that there are a pretty large number of photos of colorful bands on clouds floating about on the internet. So... have you seen them in the sky too?  (And if so, how many times?)
In addition, I've come to realize that the band of colors aren't actually in the violet-indigo-blue-green-yellow-orange-red order of your average rainbow.  So maybe it's not strictly correct to call what I saw up in the clouds to be a rainbow -- but for simplicity's sake, I'm doing so in this post!
Posted by YTSL at 9:24 PM

Wow! Beautiful! I'm so glad you had your camera handy.

I don't think I've ever seen anything quite like that, but I have seen a couple of unusual bands of color in the sky in recent years that I'd never heard of before seeing. Both, it turns out, were caused by ice crystals in the atmosphere. One was a pair of rainbow arcs that met overhead (more-or-less at a tangent). Another was a vertical shaft of red light on the horizon, a phenomenon which (not surprisingly) sometimes leads to reports of UFO sightings. I will have to post these on my blog soon…(They have been among my backlog of photos I've wanted to share.)

Both the unusual bands of color in the sky that you've seen in recent years sound amazing. So do please post the photos you have of them on your blog at some point!

The first photo looks more structured, and might be something like a circumhorizontal arc or one of a number of related phenomena:

Thanks for the IDs. Here's the weird thing though: they're actually photos of the same phenom taken you a few seconds apart -- it's just that one was taken with more zoom than the other! :O