Malaysian non-alcoholic drinks of choice :b 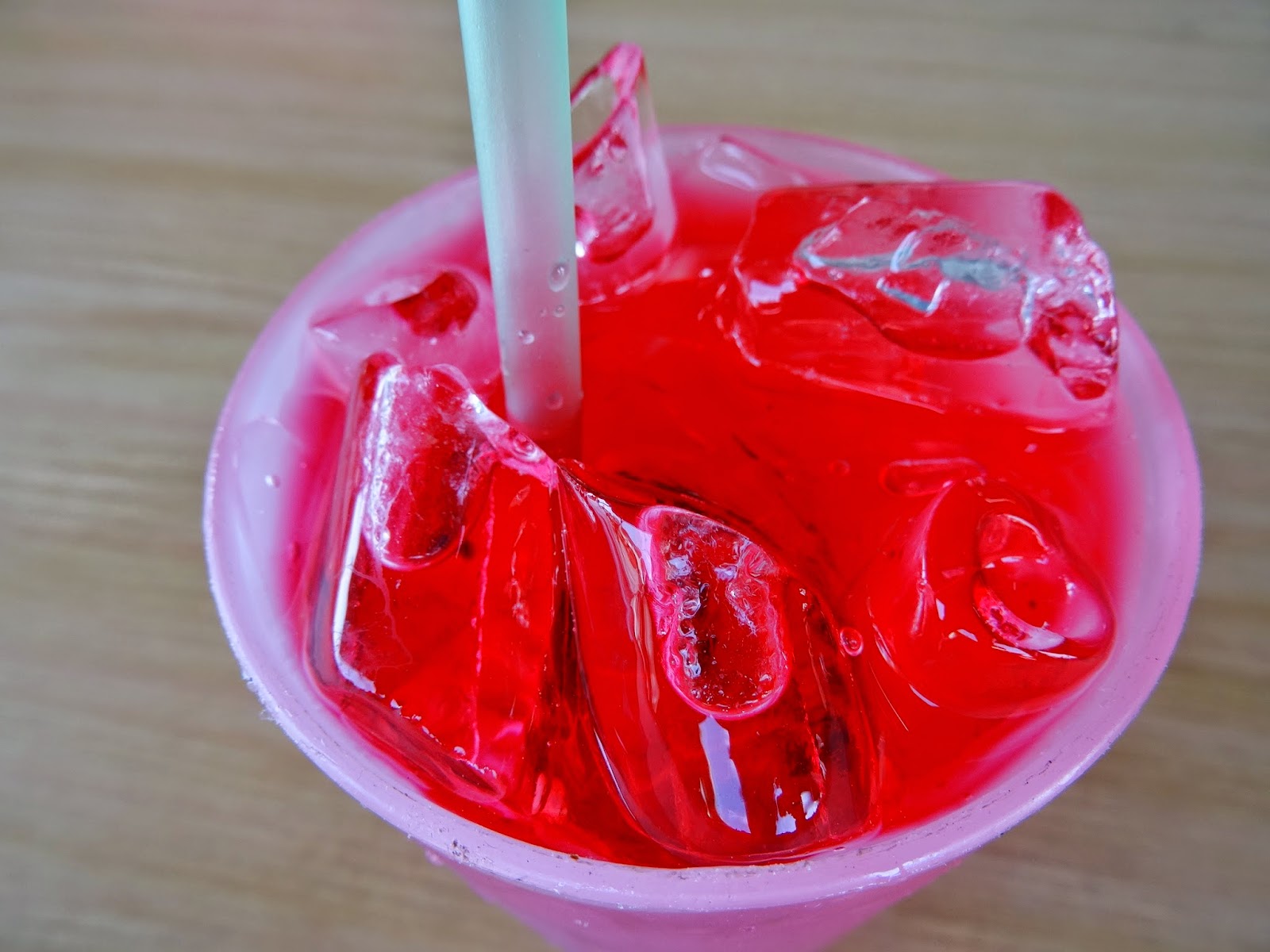 Rose syrup with lime and ice is a wonderful
thirst-quenching drink and pretty sight :) 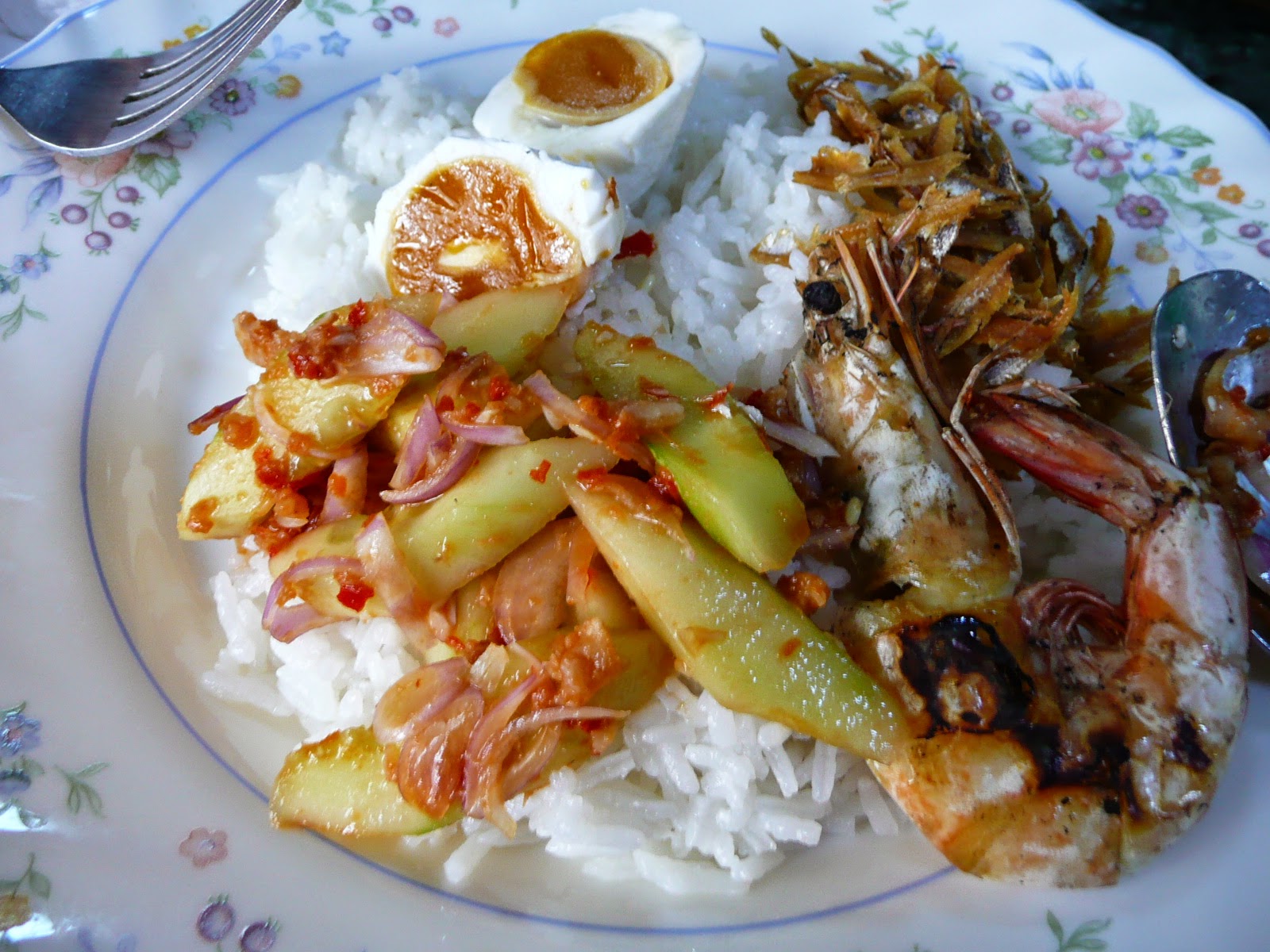 It's also happens to be one of my drinks of choice when eating
spicy food like this plate of Baba-Nonya-style nasi lemak! :b

I have a Japanese friend who thinks alcoholic drinks, especially sake, goes well with pretty much any food.  Since we share a common love of sake and beer, she was shocked when she asked me what drinks I thought went best with Malaysian food, and my reply was restricted to non-alcoholic drinks!


More specifically, I had told her that my favorite drink in Malaysia is rose syrup with ice and lime -- and I find it perfect with assam laksa, nasi kandar and a whole lot of other foods besides.  Also, that I like drinking Malaysian style iced, black coffee when eating such as the pork balls and kidney meehoon (white rice noodles) in soup dish at the Perak Lane stall that's always the first place I go and eat at on my return to Penang or bak kut teh (translation: pork bone tea -- and no, despite the name, it's much more of a substantial dish than mere drink!).

In addition, there are lots of fruit juices that I love to drink when in Malaysia -- including watermelon juice, mango juice and coconut water (but absolutely not coconut milk, which is something Malaysians cook with -- including to make nasi lemak -- rather than drink!).  Best of all, but not always easy to find, is ampullah with some preserved plum mixed in.  Oh, and nutmeg juice is pretty delicious too!


In explaining to my Japanese friend my preference for non-alcoholic drinks to go with Malaysian food, I told her that it's only partly because Malaysia is a country with a Muslim majority (in terms of religion) -- though it's true enough that nasi kandar and certain other traditional eateries operated by Muslims don't serve alcohol.  Rather, it's also because I tend to prefer to drink non-alcoholic drinks when eating spicy food -- not least because certain particularly fiery spicy foods get me needing to drink a lot of liquids in order to cool my mouth down!

In any case, it's also true that Japanese food is actually the only Asian food that I think is enhanced by drinking alcohol (specifically sake or beer) with.  Indeed, when eating Thai, Vietnamese and Indian as well as Malaysian food, I really do prefer to non-alcoholic drinks as accompaniments.  And while I have been known to have some beer or even soju to go with Korean meals, I'm also pretty happy to drink a Sprite or some other fizzy soft drink when having bossam, galbi, a jigae or something else altogether! ;b
Posted by YTSL at 11:24 PM

Concerning Spicy food paring with alcoholic drinks, it is quite difficult. Beer doesn't usually work, nor does hard drinks. Most red wine would not work as well as they would usually accentuate the spiciness which took over your palate, making you unable to enjoy the food and drink.

However, there is one kind of red wine grape that I had been trying in the past few years that seem to work: Pinot Noir. I tried New Zealand and French Pinot Noir red & white wines and found they are extremely food friendly. Even for Spicy Food. Maybe next time you give it a try. Suggest to try any New Zealand or French Pinot Noir with a price tag of around HKD200 or a bit lower. The French ones would have to be coming from Alsace region. There are German Pinot Noir wines around. They are good, but are usually more expensive.

Suggest to try Paul Blanck Pinot Noir. I got a few bottles of the 2009 vintage from Oliver's in Central a few months ago. I once took one bottle to a Siechuan outlet besides the footbridge in Hung Hom (Luen Kee Chuen Wong) with a few friends and they are all surprised by the wine.

I have not tried spicy food with Sake yet.

As for sake for spicy food: my friend recommends the sweeter sakes, including nigori (cloudy) sake... maybe you might give that a try? :)

For non-alcoholic drinks with spicy food, usually Thai iced tea worked for me in the past two decades. Pinot Noir was a discover just a few years ago.

Some sparkling wine would also do.

I will try sweeter Sake when there is an opportunity. Any suggestions as I usually stick to just a few brands of Sake.

I'll ask my friend when I next meet her. But in the meantime, you could perhaps check the sake value meter for sweet(er) sakes! :)