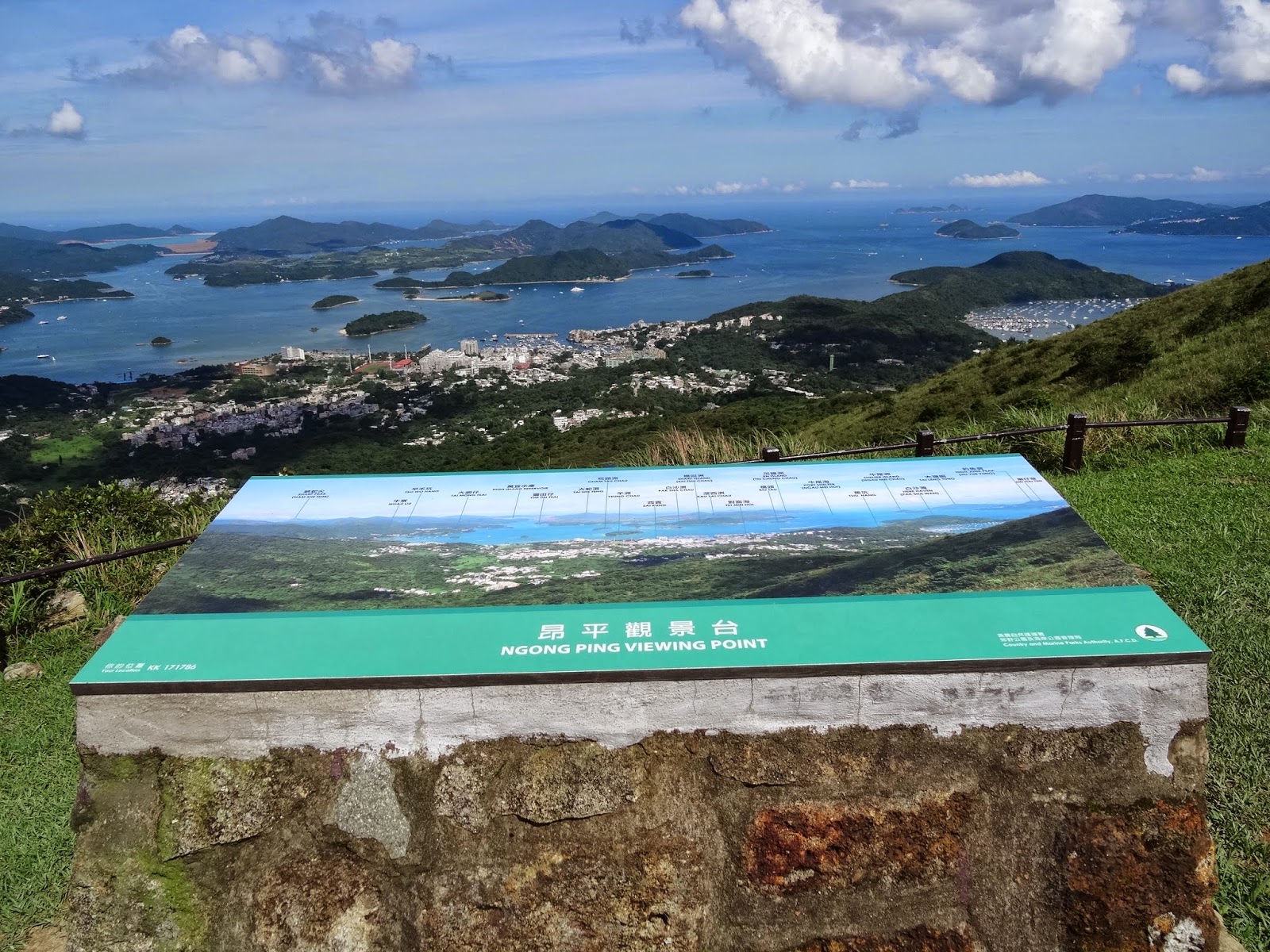 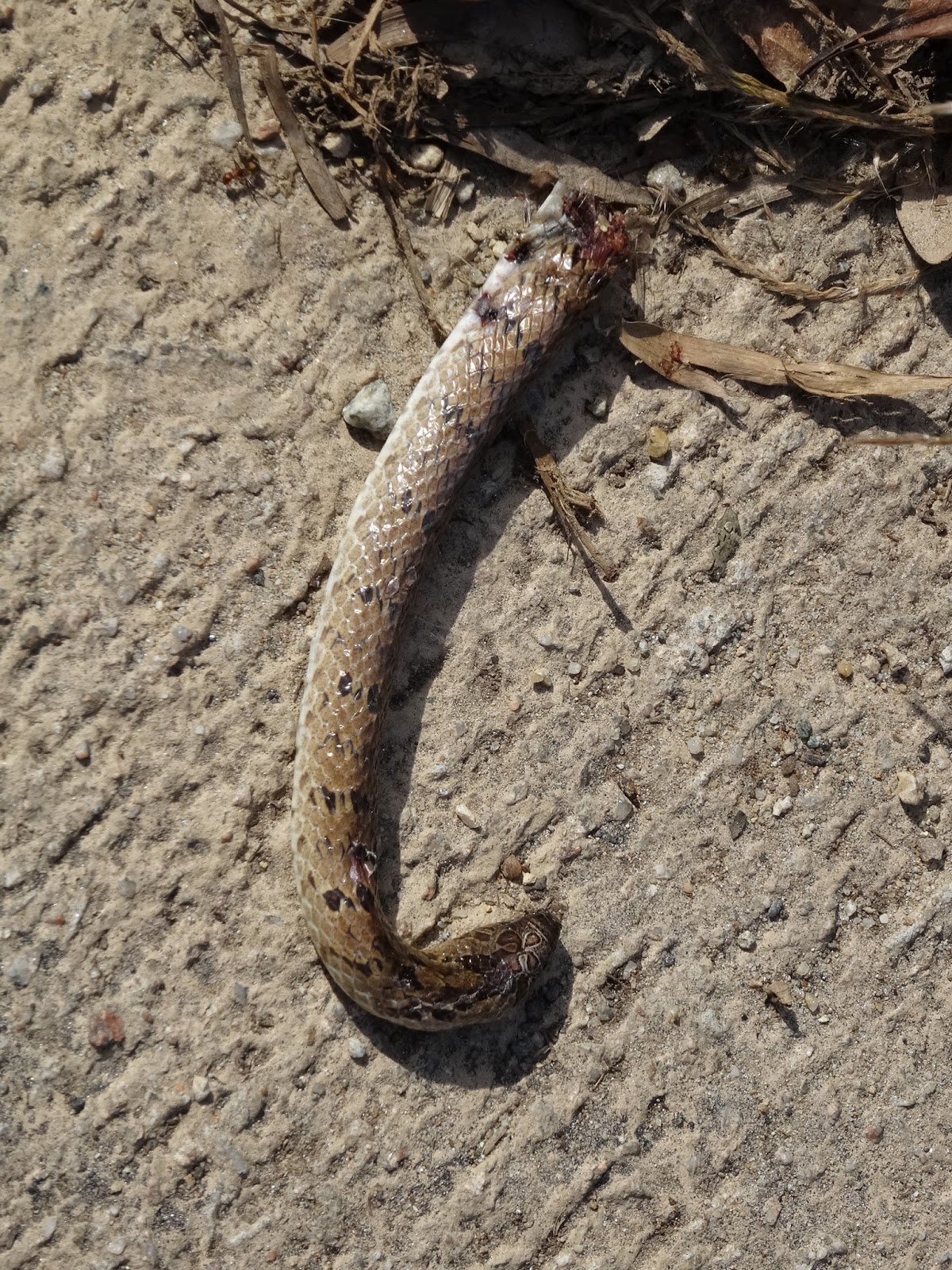 On the long way down to Ma On Shan town,
my hiking buddies and I came across
what looked like chopped up bits of snake! 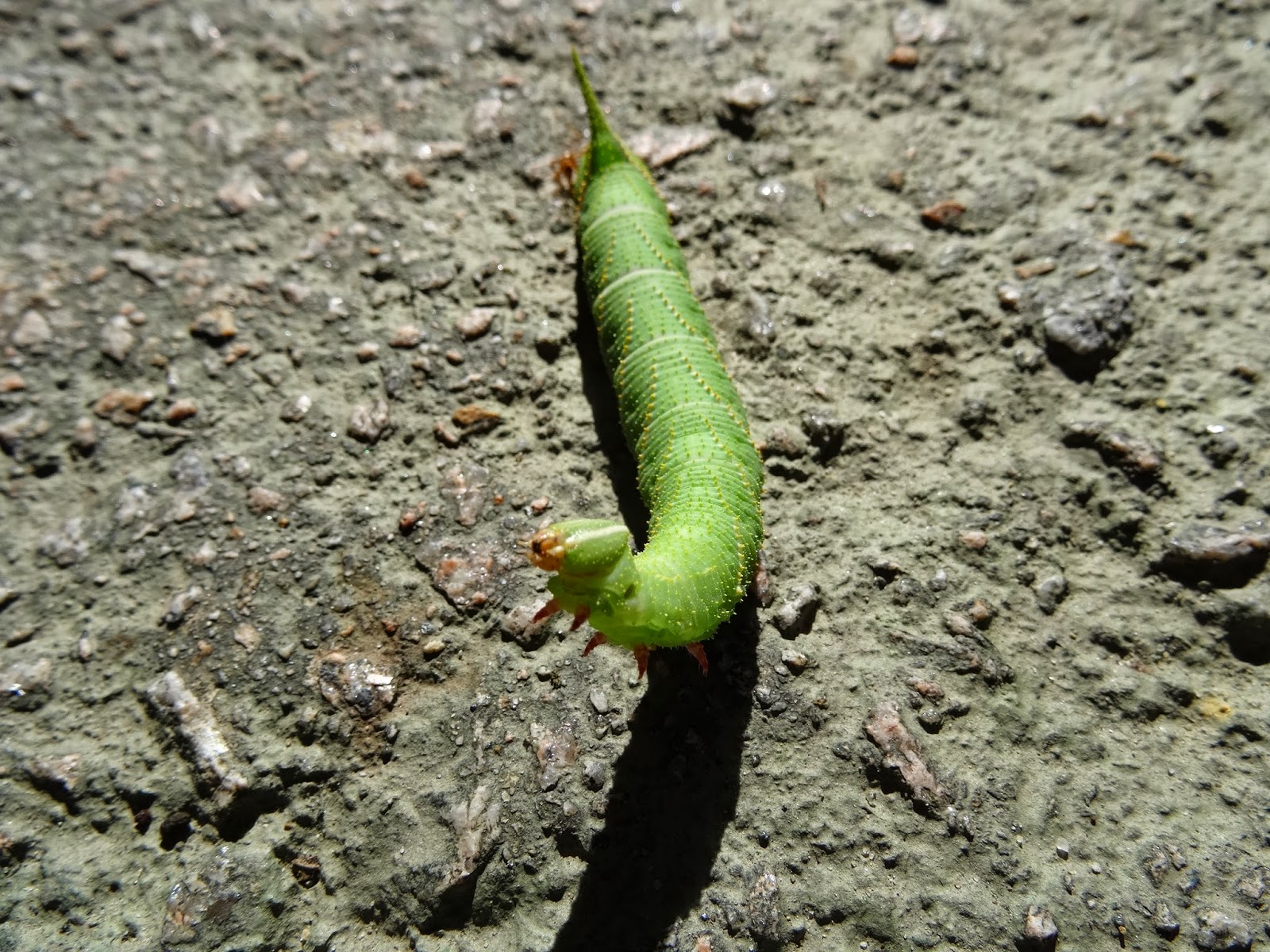 This large green bug that looked like it escaped from a
sci fi movie presented us with another startling sight!!

After whole weeks when it seemed like there never would be a rain-less day in Hong Kong again, this weekend promised to be dry and sunny, and hot.  So much did I trust the Hong Kong Observatory's weather predictions this time that when it rained early this morning, I didn't freak out and just assumed that it'd stop raining by the time my two now regular hiking buddies and I went on our planned outing this afternoon.
Eager to take advantage of the promised high visibility as well as dry afternoon, we decided to do the Ma On Shan Country Trail in reverse the way I had done with a different hiking buddy some years ago, albeit on a lower visibility as well as cooler weather day -- and this despite knowing that it'd be a challenging hike during hot weather (like today, when the temperature went up to 34 degrees Celsius in parts of the territory).  This is because I was very much looking forward to getting super clear views from atop Ngong Ping Plateau of the surrounding area.
As it turned out, we not only got great views deep into the Sai Kung Peninsula but also far south-eastwards all the way to the Ninepins, Clear Water Bay's High Junk Peak, Tung Lung Chau, Hong Kong Island and more -- and this not only from Ngong Ping plateau but as we climbed up the steep trail from Tai Shui Tseng to it.  Among other things, I don't believe I've ever been able to see Hong Kong Island's Mount Parker and Mount Butler from this part of Hong Kong before.  And it also was cool to be able to so very clearly see High Island Reservoir's east as well as west dams, and how the water contained inside it is not only a different shade of blue from the waters of such as Port Shelter but also at a different elevation.
At the same time though, this hike is one that also will go into my memory as one where we made a number of interesting critter spottings -- including of species of butterfly I hadn't previously seen (and managed to take photos of), including one magnificent example of a white dragontail, and a whole lot of hairy caterpillars.  Ironically. however, one of the more startling critters spotted this afternoon was one which was very much dead rather than alive.  Even stranger was that this snake looked like it had been chopped up in pieces and then its bits left on the side of the road for flies and similar bugs to feast upon!

Yet, the prize for strangest critter spotted today must go to an approximately six inch long green bug that I think was a caterpillar but had one of the weirdest heads I've ever seen, and also was quite a bit more aggressive than other caterpillars I've seen in the past. More specifically, while caterpillars tend to try to go away from the large critters trying to photograph it, this one not only came nearer but also reared its head in ways that would be construed as pretty menacing and scary if only it were, say, 10 times bigger in size! ;b
Posted by YTSL at 9:52 PM

HI YTSL -- Glad to hear you got a good hike in after the miserable weather! As for the caterpillar thing... maybe it knew you were taking pics of it and wanted you to take a good close-up?!

It was a good but at times gruelling -- because of the weather -- hike. I should have resumed hiking with an easier excursion but the promise of high visibility was too compelling!

Re that green thing: I dunno... have you clicked on its photo to get a close up view of it, particularly its head? ;b