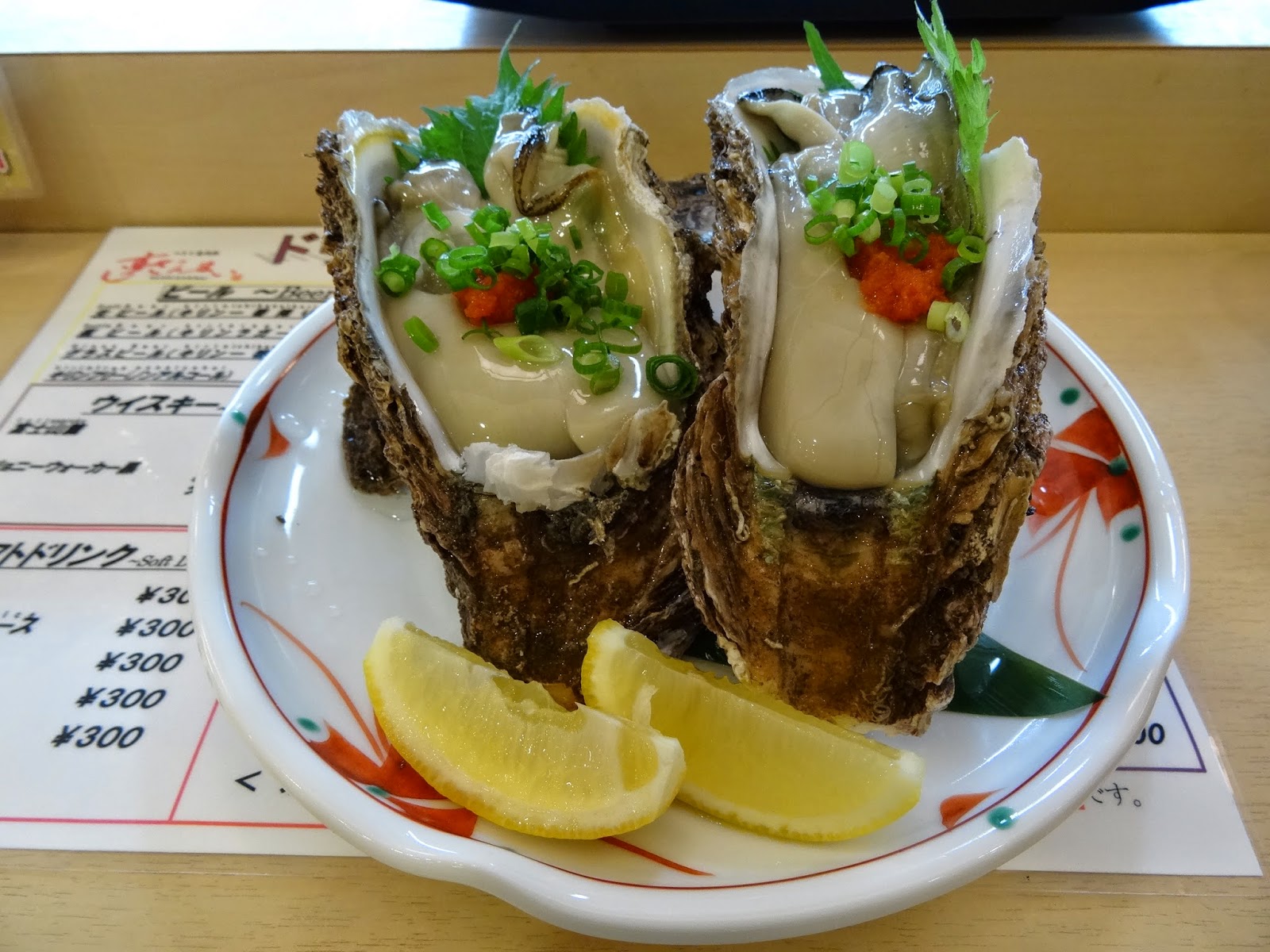 What looks like two unbelievably huge oysters actually
are four still pretty large oysters (two on each half shell)! 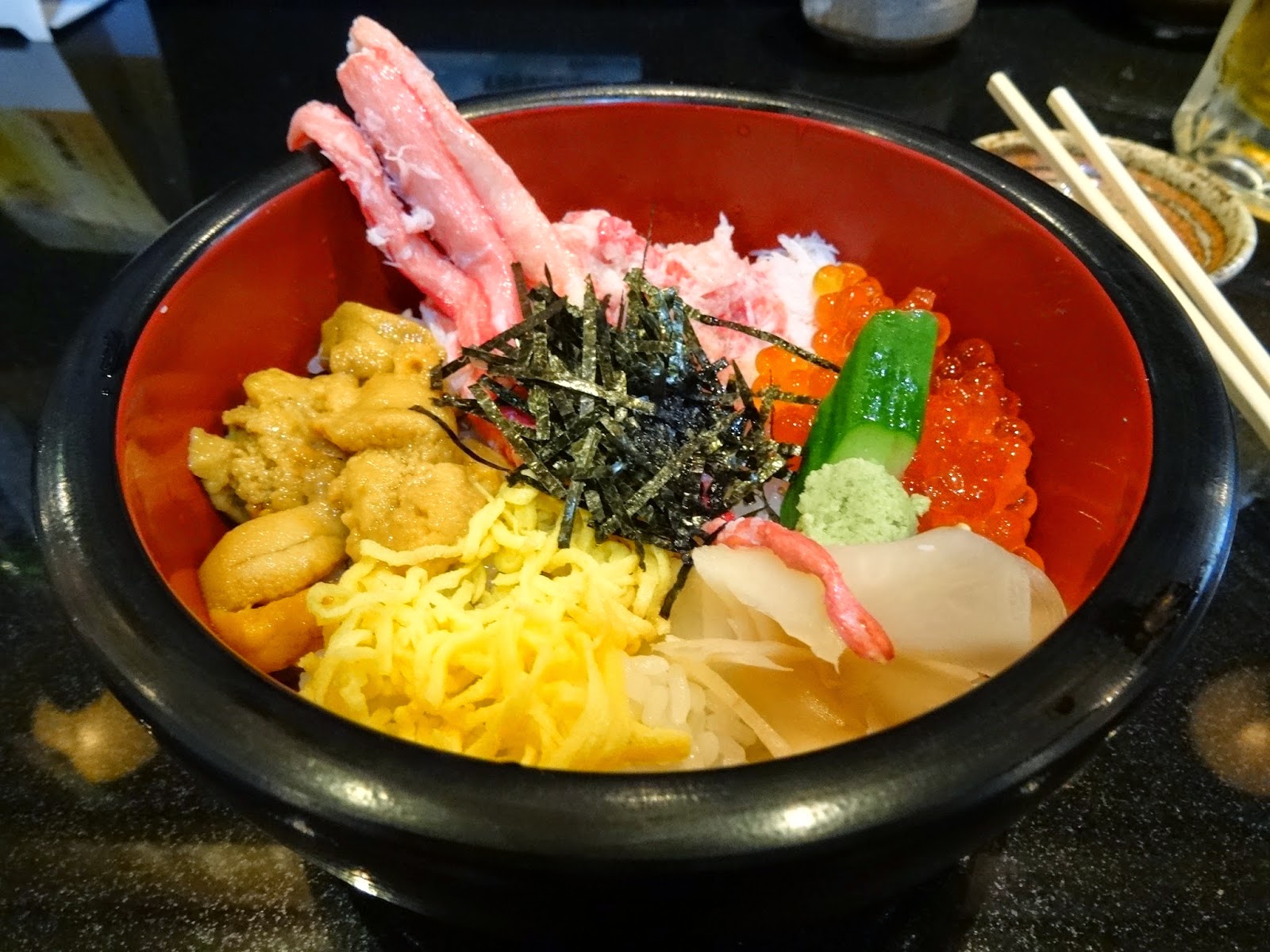 A sanshu-don bowl comprising uni, crab meat and ikura --
with seaweed, ginger and other bits thrown into the bargain 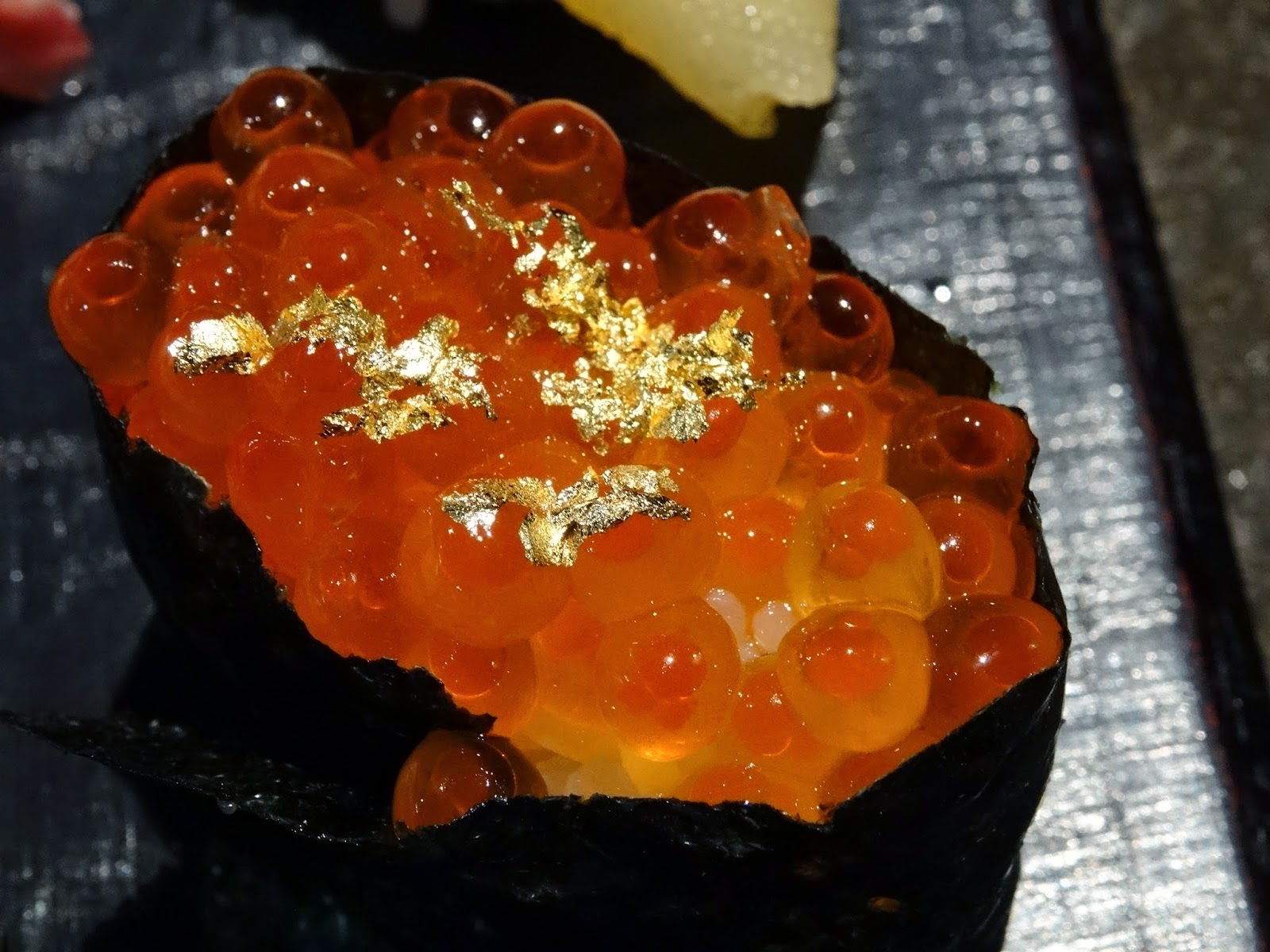 Ikura gunkan with -- yes, really! -- edible gold flakes
added on as garnish
This evening, I had sushi for the first time since returning from Japan one and a half weeks ago.  Normally, I eat sushi once -- sometimes even twice -- a week in Hong Kong but I ate so much sushi on my recent vacation that I didn't have a major sushi craving until today!

After getting back to Kanazawa from my Shirakawa-go excursion, I decided to head over to Omicho Market, where I had read that there were a number of sushi-ya.  Although I also had read that most of the market closes by 6pm, I wasn't prepared to find that the area was on the dark and deserted side for the most part by the time I went there to have dinner.
Still, all was not lost because I found a welcoming branch of Sushi Zanmai that's open 24 hours and proceeded to have another great meal there -- one that rivalled the two I had at the Sapporo Susukino branch of this excellent chain that I first was introduced to at Tokyo's Tsukiji Market.
More specifically, I went kinda crazy and ended up having an order of four large -- and very lovely -- oysters on the half shell (for 1200 Yen), one nice piece each of akami (red meat), chuu-toro (medium fatty) and o-toro (fatty) tuna, four ikura gunkan that were absolutely delicious, two kani miso gunkan (which, if I were picky, would say was okay rather than expectedly ectasy-inducing!), and one generous-sized piece each of squid tentacle, suzuki (Japanese sea bass) and amebi (a type of prawn that Kanazawa's famed for) nigiri sushi.
Despite also having a glass of draft beer and two types of sake, my dinner bill came to just around 5,000 Yen (i.e., ~HK$380 or less than US$50).  While that total is nothing to sneeze at, it really does represent good value considering what I ate, and the quality of it.  Also, while the first branch of Sushi Zanmai I went to was a conveyor-belt affair, the Kanazawa branch -- like the one in Sapporo that I had gone to previously -- isn't.  And yes, one does indeed sit in front of a chef who then makes the sushi you order.
On days 3 and 4 of my vacation, I went again to Omicho Market for sushi -- only on these occasions, I opted to have lunch there, when the market was bright and busy.  For both of these lunches, I decided to check out the sushi-ya glowingly described in Paul's Travel Pics' Kanazawa - Restaurants, Budget Hotel and Transportation blog post; with my first lunch at Omicho Market consisting of a uni-crab meat-ikura sanshu-don at Kaisendon-ya, and the second consisting of a deluxe nigiri sushi set at Yamasan Sushi.
In all honesty, if not for Paul's recommendation, I would not have eaten at Kaisendon-ya -- because there were no customers there when I entered, and this despite it being around 12.30pm -- what should be prime lunch time in Japan!  But throwing caution to the wind, I ordered the 2,000 Yen sanshu-don.  And, well, I guess it's a sign of how high my standards for sushi have become that I'd say that it was tasty but hardly revelatory.
The next day at Yamasan Sushi, there was one more customer there than there had been at Kaisendon-ya.  But this time, I actually had gone past many people's lunchtimes, so I was less bothered by the lack of customers.  As it so happens, that one customer (a matronly female who seemed to be a regular) was digging into a kaisen-don that was considerably bigger than what I had had at Kaisendon-ya the previous day.  In fact, it looked so substantial that I decided that it'd be too much for me!

I'm in agreement with Paul that Yamasan Sushi is a cut above Kaisendon-ya.  But despite it looking like -- and probably being -- a more traditional sushi-ya, my vote goes to Sushi-zanmai as the best place where I had sushi in Kanazawa -- and yes, this despite the chef at the restaurant chain that originated in Tokyo not scattering gold flakes on my sushi the way that the one at Yamasan Sushi did! ;b
Posted by YTSL at 11:50 PM