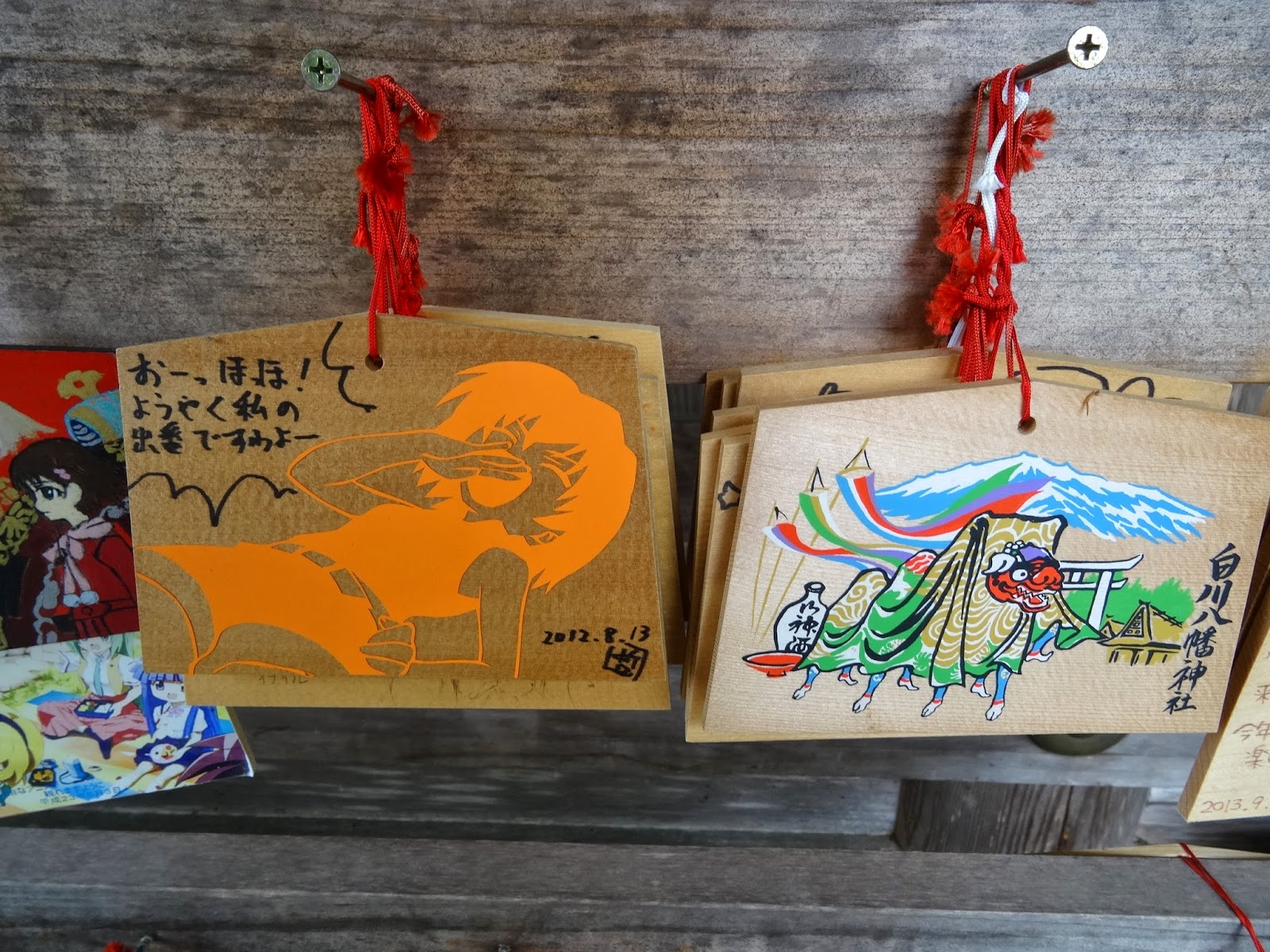 It's not every day that manga-themed ema can be found
at a Shinto shrine -- and a rural one at that! 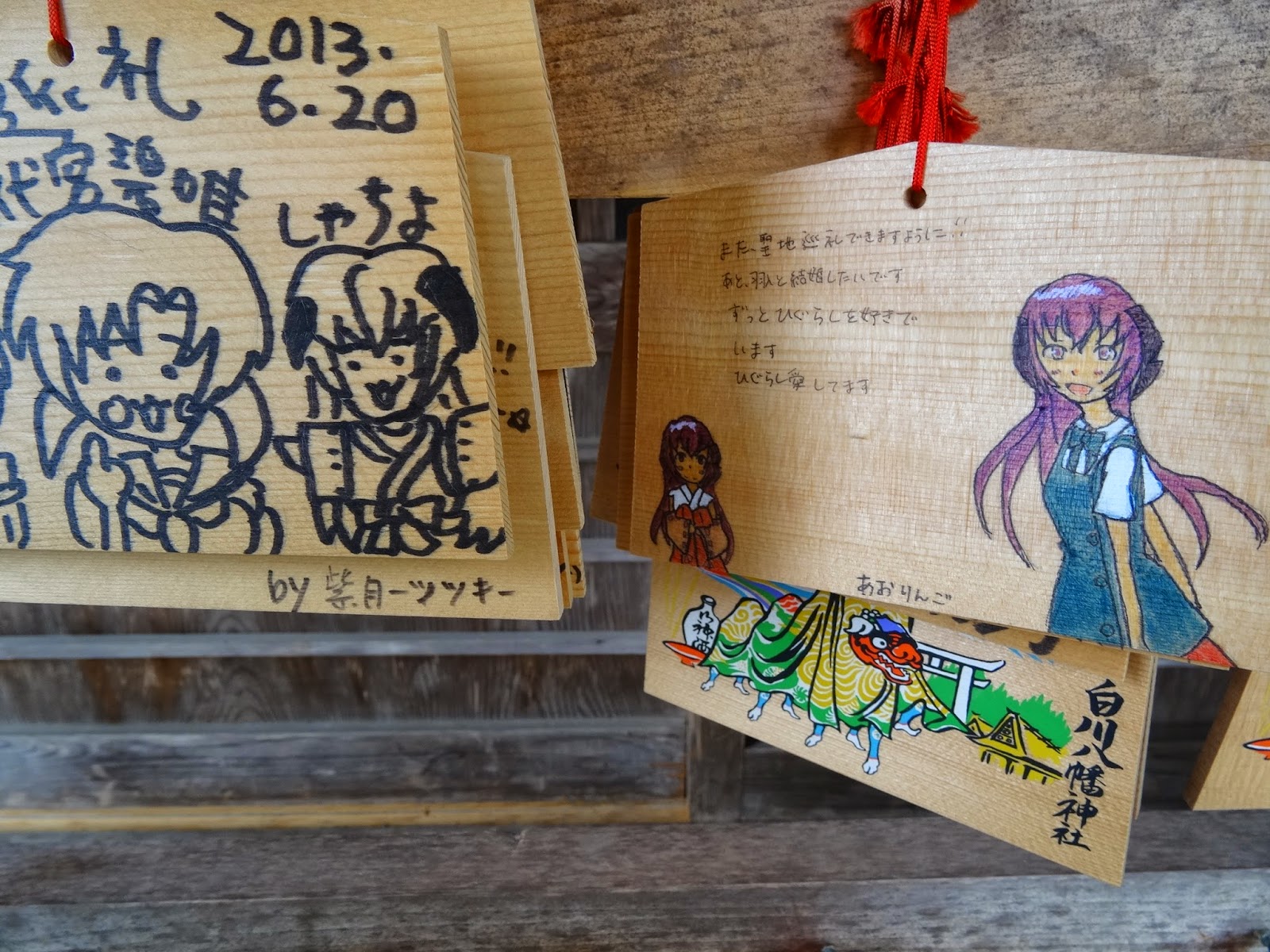 It looks like some of the shrine's visitors are
pretty good at drawing manga themselves!! :) 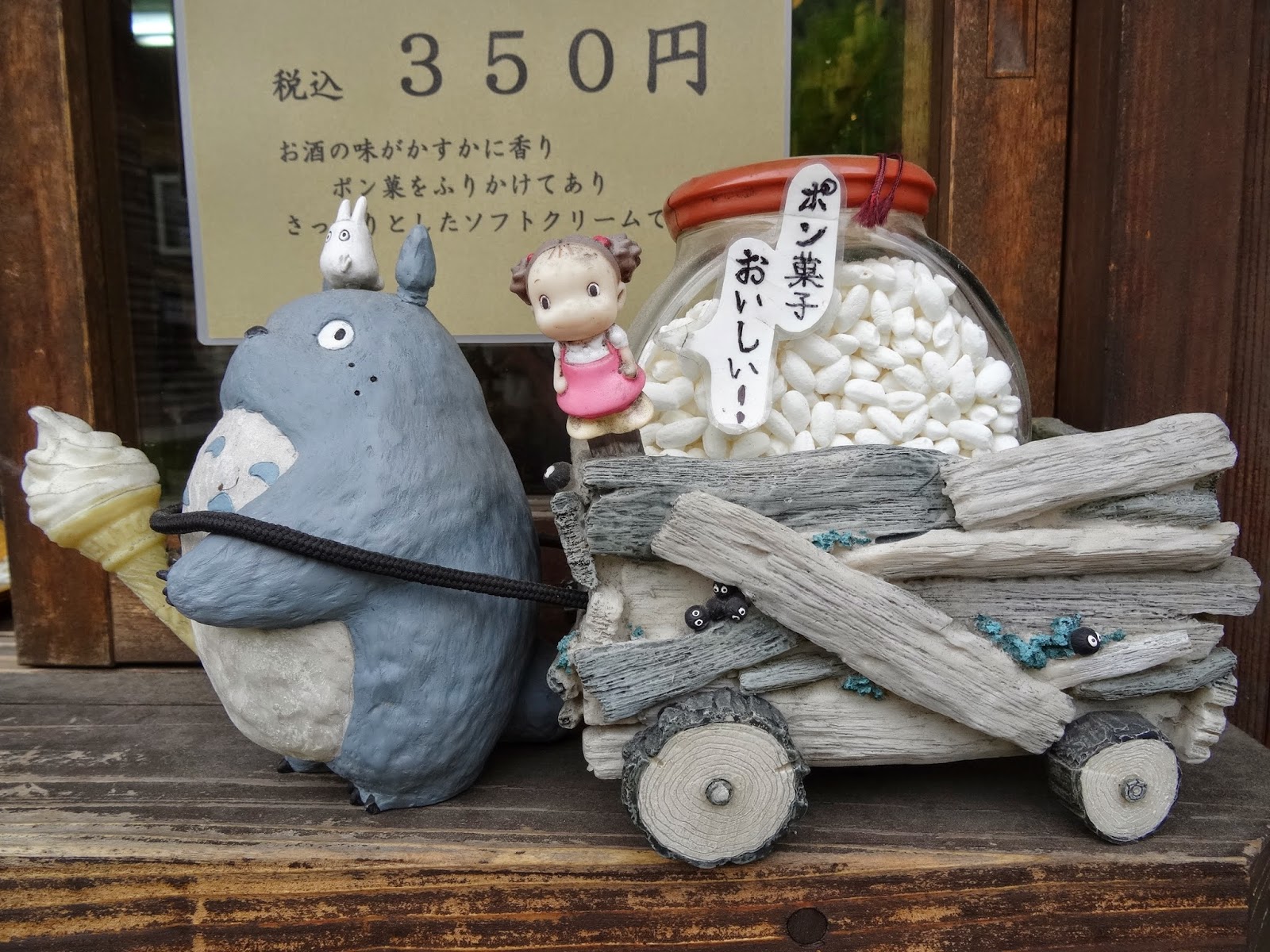 Totoro (O and Chibi versions), sootsprites and the little
human imp that's Mei can be found in Ogimachi too :)

Unlike on my Kyoto vacation, during which I visited lots of Shinto shrines and Buddhist temples, I didn't visit all that many temples on my most recent Japan trip.  At the same time though, it so happened that I checked out -- or at least visited the grounds of -- three Shinto shrines during my day in Shirakawa-go's Ogimachi village.

The first one, situated close to the popular scenic viewpoint on a hill, was the small shrine that I was headed to when a snake decided to slither by in front of me.  The second, slightly smaller shrine also was located at the edge of the village, albeit on lower ground -- and like the first shrine, is a good place to go if you wish to feel far away from what passes as a madding crowd in Ogimachi.


The third was by far the largest of the Shinto shrines in Ogimachi -- but its size was not what I found particularly interesting about it.  Rather, it was that I came across many ema there which appeared to be manga-themed along with other more conventional looking ema.


A possible reason for the existence of these ema came from a Japanese friend living in Hong Kong, who told me that she had initially been surprised to find out that her nephew had wanted very much to visit Shirakawa-go but gotto understanding why this was so when he told her that it's referenced in a popular Japanese video game!

Searching on the internet, I also found references to Shirakawa-go -- especially particular locations in Ogimachi -- having served as models for locales in an anime series called Higurashi no Naku ni. A blogger who's a fan of the series visited Ogimachi a while back and it's fun to see and compare photos of real-life scenery and anime screengrabs that he posted.

And yes, I'd love to be able to do that some day for Ponyo's hometown of Tomonoura.  And ditto re making a pilgrimage to "the Totoro house" -- or, rather, the incredibly detailed, life-sized replica of the house that My Neighbor Totoro's Mei, Satsuki and their father -- and eventually, their mother too -- lived! :b
Posted by YTSL at 8:26 PM

The images in this entry are truly enchanting...Thanks for the Tomonoura link. It inspired me to read that Miyazaki stayed here for two months in 2005 where he conceived the idea for Ponyo on the Cliff by the sea.

I am enjoying your photos and travel adventures. What a wonderful expression on Totoro's face in the 3rd photo.

Glad you like the photos and thanks for using the links I embed into my blog posts! :)

I think Totoro's face is saying, "What happened to my whiskers?!" ;b