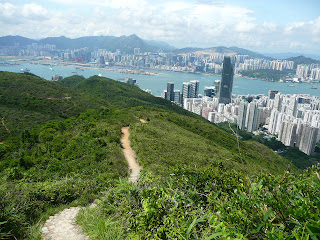 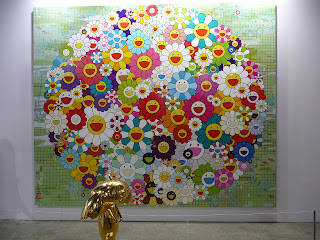 This work by Takashi Murakami made me smile at that
which gets my vote for best visual arts event of 2011 :)
As I told a friend (who occasionally reads my blog) at dinner last night, one reason why I go about writing up my annual "10 highlights of..." posts is that the very act of doing so gets me looking back at the past year -- and thinking of the many great times and experiences I had in the previous calendar year. On a related note: more frequently than not, it gets me realizing how much good stuff I often manage to pack into 365 days -- and realizing how good a life I generally lead (even if that life does have some bumps in the road now and then).

1) Best book: Josie Dew's A Ride in the Neon Sun: A Gaijin in Japan was first published in 1999 but I only came across it in a used book store in Hong Kong in 2011. A thick paperback that's 689 pages in length, the account of the Englishwoman's bicycle tour of a country she describes with much warmth as well as a humorous outlook was so very readable that I tore through it in way less time than one might think. Although its author never professes to be an expert about the country or its people, one nonetheless comes away from reading the book feeling that she did manage to get to heart of many things Japanese -- and also had her heart touched by her encounters with more than one Japanese person in more than one part of that land of contrasts, even if not major ethnic diversity.

2) Best concert: The Taiko Legend concert that was part of the Enchanting Arts of Asia (World Cultures Festival) program presented by the Leisure and Cultural Services Department had Japanese national treasure, Hayashi Eitetsu, leading members of his Eitetsu Fu-Un no Kai group in serving up the kind of mesmerizing, pulsating performance that often appeared to be a coming together of martial arts with music. Put another way, there's no mistaking the grace and strength on show -- and no forgetting the incredible and exhilarating percussion sounds that filled the Hong Kong Cultural Centre's Grand Theatre that evening. How ironic then that upon my unexpectedly being given two complimentary tickets (rather than just one), I ended up asking more than ten friends in vain if they wanted to go to the concert with me before the first person I asked (a woman who had lived in Japan and whom I got the distinct feeling would love this show) got back to tell me that she could make the date after all! ;b

3) Best dance show: As a young child, my mother made me take ballet lessons. The experience left me loathing this dance form for decades, not just years. Even now, it's not often that I attend a ballet show completely voluntarily -- rather than due to feeling obligated professionally or to accompany my ballet-loving mother. So I'd say that it takes a really special ballet to make me enjoy the performance -- and in 2011, the Birmingham Royal Ballet did just that when it came to town as part of the Hong Kong Arts Festival and presented the Asian premiere of Hobson's Choice, a dance version of Harold Brighouse's play created in 1989 by David Bintley in which not a single tutu is to be seen. Fun, lively and expressive, it was an expertly danced musical comedy with plenty of heart and soul along with bravura performances as well as interesting characters. In short: truly a sight to behold -- especially in those scenes that called for fast-paced action of the kind that I previously had not associated with ballet works!

4) Best single dish: In 2011, I went back to Penang three times. The first two times, I was able to go lunch at my favorite Malay assam laksa stall (over on Shamrock Beach) -- and as is my custom, I had two bowls of that delicious concoction -- the first one eaten quickly to satisfy my cravings, the second eaten slowly in order to truly savor its sublime taste(s). The third time around, I went to Shamrock Beach but found the stall was not operating that day. Loathe to leave that area without a taste of assam laksa, I ordered a bowl from a nearby competitor. Suffice to say that doing so only resulted in my having no doubt that I really, really love the assam laksa from "my" regular stall -- and so much so that I actually might consider it my favorite single dish of food ever! :O

5) Best ferry/kaito ride: This may seem a super specialized category but believe you me that there are plenty of candidates for this as there are quite a number of different ferry and kaito routes within Hong Kong (as well as the route between Hong Kong and Macau). And while it may not be the longest and most definitely is not the best known, I really do love the ride along the kaito that goes from Chek Keng (where I've ended more than one hike) to Wong Shek Pier out on the Sai Kung Peninsula. If you ever get the chance to go on this kaito, make sure you eschew the seating in the covered area in favor of that on the open top section where you are guaranteed a refreshing breeze along with fresh air and some pretty views that are well capable of taking your breath away.

6) Best hike: I went on more hikes (34!) this past year than in any other year of my life thus far -- and quite a few of them really were very enjoyable indeed, including ones that I went on in the summer months (when many people won't go out hiking in Hong Kong). And, indeed, my favorite hike of 2011 was a very satisfying trek that my regular hiking companion and I went on one beautiful Sunday back in June with great visibility -- along a route that took us from the Quarry Bay section of King's Road, up Mount Parker Road and a section of the Wilson Trail to Siu Ma Shan and Mount Butler (where superb views were to be had), then down along the Jacob's Ladder of Hong Kong Island to Quarry Gap and eventually back down to the hike's starting point.

7) Best manga series: At the tail end of 2010, a friend introduced me to a Japanese food themed graphic novel that I later found out was part of a series of seven cooking manga that effectively are compressed "best of" as well as English translations of a popular Japanese manga series. Writer Tetsu Kariya and illustrator Akira Hanasaki's Oishinbo a la Carte devotes whole volumes to the joy of rice, vegetables and sake (separately) as well as fish, sushi and sashimi (one book) and ramen and gyoza (one other book). It also introduces its readers to involving characters like a slacker journalist with a rare knowledge and passion for food, his soulmate, friends and colleagues... and his estranged artist-gourmand father. Perhaps the best way for me to describe how wonderful these books are are that I find it impossible to not eat (or at least snack) when reading them -- and suffice to say that I've re-read them more than once this past year as well! ;b

8) Best meal: Back when I was living in Penang, I read Ruth Reichl's Garlic and Sapphires: The Secret Life of a Critic in Disguise and thought how cool it'd be to go on a restaurant review. These days, I'm very lucky enough to get invited along a fair few by a good friend of mine who writes about food for a living. And it was while out on a food review with her that we dined at Sushi Dokoro Hikari, a specialist Japanese eatery whose sushi is good but also has surprisingly good tonkatsu and super excellent sashimi (the last due to its Hong Konger head chef having incredible knife skills as well as an ability to get very fresh seafood and other ingredients for his craft). Even without adding the fact that this meal was free (in that the company she works for picked up the tab), it was already great -- but yes, there definitely is a certain additional joy to be had in getting to eat a superb meal without having to put down a single cent for it! ;b

9) Best theater show: People's memories being what they are, we often find it easier to remember things that took place a month or so ago rather than 10 or 11 months before. At the same time though, my sense is that even if I had checked out a performance Tang Shu-wing Theatre Studio's Beating the Classroom in January rather than December 2011, I'd have found it very memorable. For one thing, it's one of the first -- if not the very first -- non-verbal physical comedy theater shows I've ever seen. For another, it really was very creative, fun and eye-catchingly entertaining. And for a third, the cast was really unusual -- consisting of not only "regular" actors but, also, a trained gymnast who is the coach of the Hong Kong Cheer Team (Zico Hau), a trio of Bboys and a multi-talented entertainer (Lisa Cheng)who was able to use her sports climbing(!), gymnastics and belly dancing(!!) as well as acting abilities to good use in the show!!!

10) Best visual arts event: Especially during its Vernissage period, the Hong Kong International Art Fair (ART HK) can attract people who look like they want to compete with the actual art works for attention. Still, for actual culture vultures like me, there really still is plenty of real art from Hong Kong and far beyond to look at and appreciate. What's more, with the 2011 edition having been better than the 2010 edition, this is one annual Hong Kong artistic event that does promise to grow better as well as bigger from year to year. So, yes, I'm already looking forward to see what its organisers have in store in 2012! :b

And after having read your list, I agree that you have a very good and very interesting life....Wishing you more good experiences in 2012 too.

Thanks for finding the post interesting! The best Hong Kong movies of 2011 list should be out sometime next week... ;)

Thanks for reading and am glad you enjoyed the post. Happy weekend -- and photo hunting -- to you too. :)

This is such a comprehensive post.. I too am looking over my blog as it has been 5 years now.. I had to laugh at the ballet. I too had to take it and didn't like it one bit..

I miss your favorite assam laksa too :(

I have a feeling that you and I are not the only ones who had the kind of childhood ballet experiences that we had. At least we can look back and laugh, right? ;b

We really must meet again -- and eat that great Malay assam laksa -- in Penang before too long! :b

Everytime I visit, I get such nostaliga for HK.
And you are inspiring me to do a best-of list. Although for me,this year, pretty much everything was a best of...but now I've got it...a best of for Yang; a worst of for Yin.

I feel very complimented that my posts make you feel nostalgic for Hong Kong. And your best and worst of lists idea sounds intriguing. :)