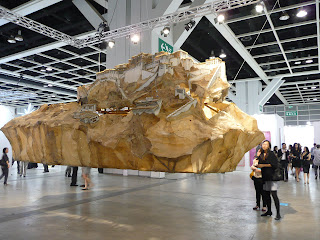 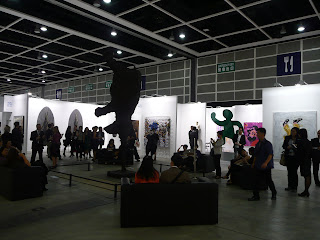 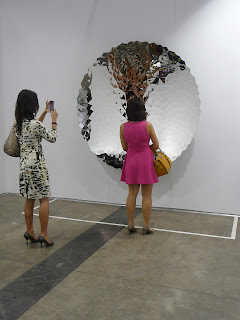 At opening night, some eye-catchingly attired
members of the audience compete with the art
for attention and to be in the frame!
As many a local culture vulture knows, the Big Lychee has a distinct cultural year whose highlights include the Hong Kong Arts Festival taking place in February and March, the Hong Kong International Film Festival taking place around March and April of each year and Le French May increasingly extending into April and June as well as having plenty of events scheduled for the fifth month of the calendar year. And although it's only four years old this year, the Hong Kong International Art Fair (AKA ART HK) definitely also has become a "must attend" event for those with a love of visual arts.

Last night, I went to the vernissage (AKA opening night) of ART HK 11. Because of work commitments, I only got to its Hong Kong Convention and Exhibition Centre venue in Wan Chai around 7.30pm -- so only had an hour and a half or so to say hi to friends who were already there as well as check out the rich assemblage of works on display there courtesy of more than 260 art galleries from 38 countries.

In all honesty, however, I tended to fixate more on the art on view -- and this year, there really were much more recognizable works by famous artists (including dead white men like Pablo Picasso, Andy Warhol, Roy Lichtenstein and Camille Pissarro as well as living individuals like Takashi Murakami (whose smiling flowers invariably bring a smile to my face), Ai Weiwei, Damien Hirst, Julian Opie and Bridget Riley) than previously.

At the same time, it also is true enough that works by less well known artists are quite capable of catching one's attention and eye. And for those who wonder: while it is undoubtedly the case that the galleries taking part in ART HK are there with the intention of selling the works they have on display, I really do think that it is very possible for one to have an enjoyable -- and educational plus aesthetically pleasing -- time at this event (which goes on through to this Sunday) even if one is there just to look (as opposed to be looking to buy). :)
Posted by YTSL at 9:34 PM