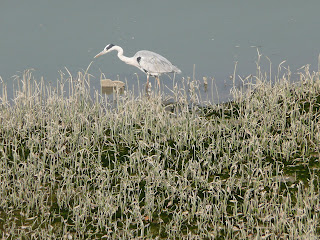 Is that a Grey Heron in the picture? 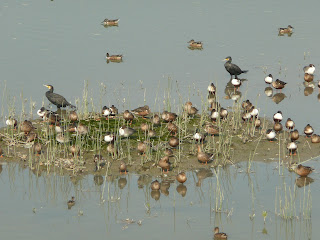 Other birds spotted at the Hong Kong Wetland Park
earlier today included ducks galore and also a number
of what looks to me like Great Cormorants! :)
For many Hong Kong residents, Tin Shui Wai has a reputation as the City of Sadness. And even though there's at least one movie (Ann Hui's The Way We Are -- which I included in my 100 must-see Hong Kong films list) that shows that life in that corner of the Big Lychee isn't all bad, the majority of cinematic works I've viewed that take place in this new town out in northwestern Hong Kong -- including Ann Hui's Night and Fog but, also, Lawrence Lau's Besieged City -- paint pictures that make it so that you'd never want to go near it.

So it may surprise many people to learn that I've been to the area a few times for leisure purposes and had good experiences each time that I've visited. And so much so that on the last two occasions that I've gone to that area, it's been while on a day out with visitors to Hong Kong.

To be sure though, I have yet to actually spend all that much time in the new town itself. Instead, the first time I visited the area (and I'll point out that this was before I actually was aware of Tin Shui Wai's negative reputation as I was still rather new to Hong Kong then), it was to go along the Ping Shan Heritage Trail (one end of which is located very close to Tin Shui Wai's MTR station). And the most recent three visits to the area have been to the Hong Kong Wetland Park whose attractions include chances to catch sight of a fair number of wild birds that are attracted to the ponds neighboring the park and the Mai Po Marshes Nature Reserve.

Although the Hong Kong Wetland Park has attracted its share of criticism, I honestly feel that the authorities could have done much worse than create this space and facility that people who, for whatever reason, have yet and/or are unable to venture out to the more authentically natural parts of Hong Kong can enjoy. In addition, I have this park to thank for some of my better Hong Kong bird photos -- ones where, even without the help of thousands of dollars worth of zoom lenses, the wild birds in the photos actually are larger than mere specks whose details are next to impossible to make out!

Thus it was that I chose to take my parents and a family friend out there for a few hours this new year's day -- and although I fear that my parents got way more tired from walking about the park than I had anticipated (not least because the walkways, paths and trails in the park are on pretty flat land), I trust that they did generally enjoy their visit to this part of Asia's World City where few tourists (think to) venture! :b

Martin Williams at Hong Kong Conservation really dislikes the Wetland Park--fortunately it couldn't be as bad as he describes it.

Love the picture of the heron--they are such elegant birds. A blue heron has taken up residence on a golf course not for from where we live--we see him a few times per year and it is always a pleasant surprise.

Herons are so elegant. One of the first things we noticed when we came to Ireland was the number of Grey Herons. I love these two photos. They have a clear and restful quality which is very welcome ;)

Martin Williams has higher standards than me -- some place he doesn't like as much as me is the Nei Lak Shan and its Country Trail. This is not to say that I don't appreciate his thoughts and writing though -- hence my often linking to his pieces for reference!

A blue heron sounds lovely. Glad you're privileged to have one living near you. :)

It's amazing that Grey Herons are to be found in places as geographically distant from each other as Ireland and Hong Kong! Glad you like both of this entry's photos. :)

I was just about to comment on what wonderful lenses you must have, but I see you say that you don't need them! We have a good few herons around here but I rarely get close enough to take anything that isn't a speck on the horizon.

Re zoom lenses: maybe I should qualify my earlier remarks by saying that I don't have any detachable zoom lenses but that my now close to four year old camera has 10x zoom capabilities:-

Also, re getting (relatively) close to the herons: it really helps that the Hong Kong Wetland Park is equipped with bird hides:-

We really enjoyed visiting the wetland park, I'm sure there are many valid points either way for such a venture but it felt like a great use of the space to us. As for the gorgeous Grey Heron, one flies over our house almost every day!

I'd be honest and admit that I'd rather go hiking in Hong Kong than visit the wetland park -- but I like the Hong Kong Wetland Park for taking people who prefer an easier outdoor option.

Re Grey Herons: wow re one flying over your house almost daily -- and your noticing that's the case! :b