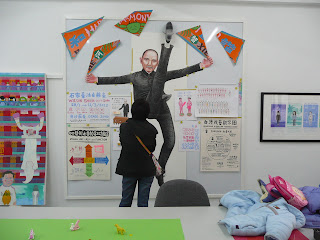 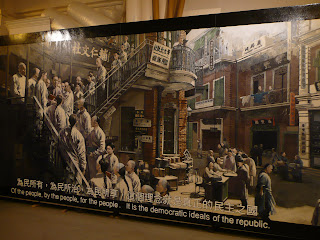 One of Chow Chun Fai's movie inspired works on
display in the artist's studio at the same event
It's not glitzy and frequented by beautiful people like the Hong Kong International Art Fair. And instead of taking place in a centrally located landmark venue like the Hong Kong Convention and Exhibition Centre, it goes on in a Sha Tin suburb originally developed to be a light industrial area.

But when I checked out the Fotanian Open Studios program last year, I saw enough there that was to my liking that despite yesterday being the kind of damp gray day when one is not all that greatly inclined to venture far away from one's living space, I still decided to go out to Fo Tan once more to enjoy some art for free. (For yes, you read right, unlike Art Hong Kong, this decidedly more egalitarian visual arts event has zero ticketing arrangements or admission fees.)

To be sure, some of the works on display in some of the studios that open their doors to the public during this event that is in its 11th year may get one thinking that their creators have more ambition and bravado than actual artistic abilities. But the likes of Wilson Shieh (whose studio is surprisingly small as well as super spick and span) and Chow Chun Fai (whose impressive studio -- equipped with computer, stereo equipment, comfortable looking furniture and filled with books and videos as well as his works -- may well be the ideal thinking, living and working space for creative types!) produce works than really "speak" to me and have me convinced of their possessing genuine artistic merit.

Understandably given that the year that has recently ended was the centenary year of the 1911 Chinese Revolution and also one which saw such as Ai Weiwei incurring the wrath of the Communist Chinese government, both Shieh and Chow had eye-catching works on display in their studios that referenced one or both of these events. Incidentally, for fellow Hong Kong film fans who think that the large-scale work by Chow that I photographed looks familiar, here's pointing out that it's of a scene -- complete with accompanying Chinese and English subtitles -- from Bodyguards and Assassins (the 2009 Teddy Chan political drama-actioner about a motley group of men and one young woman working to protect Sun Yat-sen from imperial Qing assassins getting at the father of modern China on one of his visits to Hong Kong)! ;b