As I write this blog post, it's winter -- and optimal hiking season -- in Hong Kong. But back in June, it was so hot and humid that I didn't go on a single hike in the countryside all month. Indeed, the closest thing to a hike that I went on over that entire summer month was a leisurely walk one afternoon along the approximately 2.25 kilometer (1.4 miles) Lung Yeuk Tau Heritage Trail over in the northern New Territories -- one that I took with a German friend who I met while out hiking back in September 2007 and two German friends of hers... 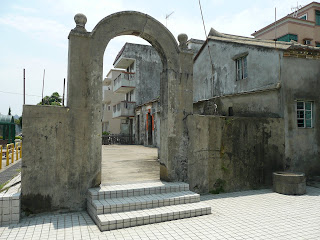 We started our walk at the northern end of the trail --
at the village of Siu Hang Tsuen whose archway
at its eastern entrance was built to obtain better fung shui
(and specifically to get more male offspring!) 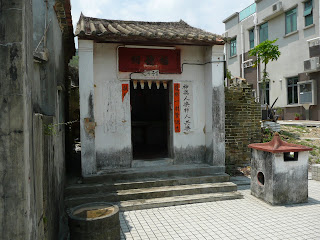 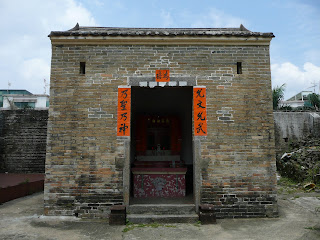 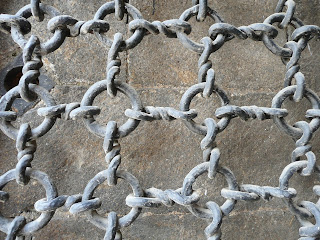 Sometimes, beauty can be found in what is mundane
to many -- in this case, it comes in the form of
the metal work that's part of the village gate 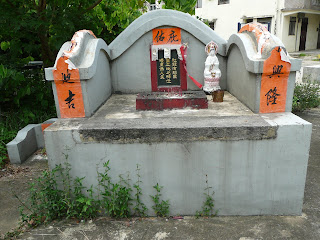 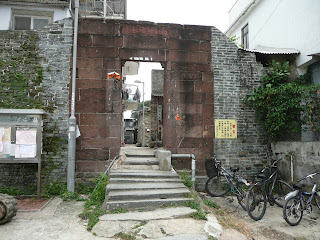 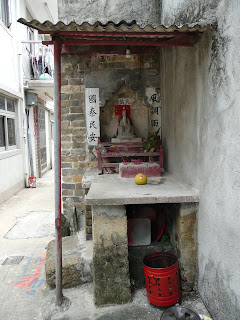 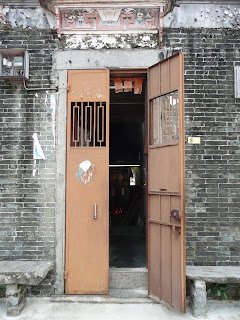 Many Hong Kongers consider buildings
that are over 15 years old to be really old --
so what price traditional abodes like this one
in Wing Ning Tsuen that look like
they've been lived in for generations?

And with that question, I'll leave you... for now. To be continued (and I have to truthfully state that without realizing that we were doing so, we turned out to have saved the best sights for close to last along this trail! ;b)

Interesting--the overall impression I get from these pictures is that Siu Hang Tsuen is a small place. Not so much in population, which it might be, but many (not all) of the buildings look as if they are built on a small scale. The shrines and temple look almost as if they are meant to be used by one or two people at a time.

An aspect of living in Hong Kong that one might consider strange is the newness of everything, especially since anything over 15 years old is considered ancient.

Are there any buildings left from the pre-colonial period?

Siu Hang Tsuen is indeed a place where things are built on a small scale. And speaking of small scale: it often surprises me how small many of the religious buildings in Hong Kong are.

As for old buildings: actually, there's a photo of a building from the pre-colonial period a few blog entries ago -- i.e., the Tin Hau Temple at Joss House Bay! (Though I understand why you could have not noticed as it's been extensively renovated.) For the most part, the pre-colonial period buildings that I have seen are Taoist temples and forts erected by the imperial Chinese government (notably those at Fan Lau and Tung Lung Chau).

You ain't seen nothing yet -- because the second part of the trail yielded better sights to my mind! (Putting up a photo-essay of that next week, so come back for another visit! :b)

I love that shot of the metal work! There's a nice visual push and pull between abstraction and texture.

Glad you like that shot! Hesitated about putting it into the photo-essay because I thought people might prefer to see photos that appeared less abstract but I feel like that metal work photo allows me to express my artistic eye! ;b

"the village of Siu Hang Tsuen"

You do realize that this phrase is tautologous? The village is actually known simply as "Siu Hang" (I live across the river in San Wai).

But thanks much for your Ma Wat Wai query. I've gone and corrected that part of the blog entry. It's amazing that no one else pointed this out before since this blog entry's more than 2 years old! :)