The last photo in the previous Lung Yeuk Tau Heritage photo-essay was taken in Wing Ning Tsuen, four villages and more than half way in geographic distance from the northern end of the Heritage Trail where my friend, two friends of her (who hitherto had never ventured into the New Territories and had never seen a green taxi, never mind ride a green minibus like the ones that took us to and, a few hours later, away from the Heritage Trail to the nearest MTR station to it. Walking in a southwards direction, the heritage sights captured in the following photos are some of what one gets to see further along the walk that often can seem like it's a stroll back in time as well just a few kilometers.

More than incidentally, although the Hong Kong Tourism Board website page devoted to this particular trail seems to make it sound as though it goes through eleven villages, that is not the case. But even though, if truth be told, the older Ping Shan Heritage Trail between Tin Shui Wai and Yuen Long out in northwestern Hong Kong actually yields more sights, this northern New Territories trail still is a cool way to venture out into a part of the Big Lychee that most people would otherwise not check out and visit places that most definitely are not without their own beauty, charm and attraction... 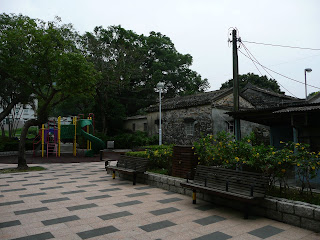 Old village with a new playground! 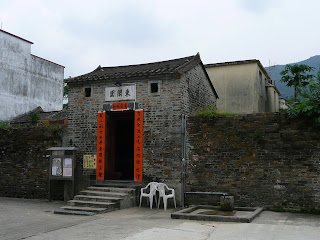 The main entrance of Tung Kok Wai
(trans. Eastern Walled Village), a settlement that
has been continuously inhabited for over 500 years 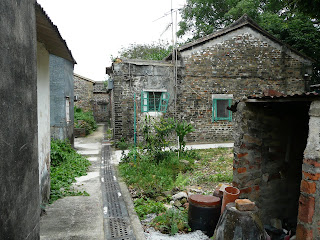 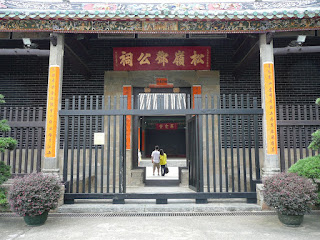 Compared to everything previously seen on the trail,
the Tang Chung Ling Ancestral Hall is super impressive
as well as wonderfully photogenic (and no, that romantic couple
didn't know they were posing for this camera! ;b) 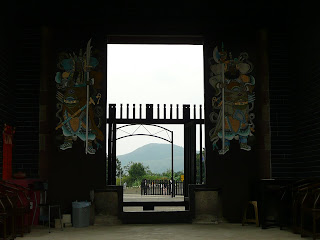 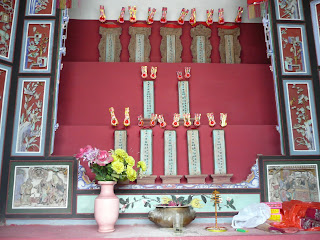 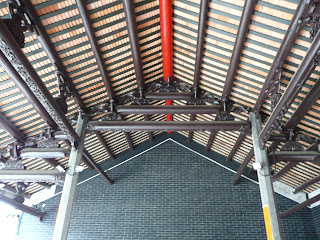 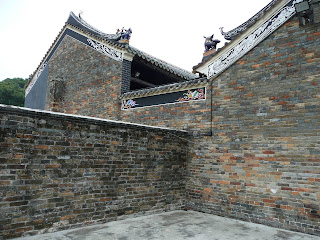 Ditto re the colors of the bricks that made up
the buildings' walls (along with the patterned borders
and animals atop their upper sections)!
To be continued (since the more I see of the photos, the more I think this trail merits not one or two but three photo-essays!)...

Quite an impressive place for a little village. It looks as if there are designs or signs/things to read on just about every spot that would hold them.

The white on blue (dragons? gods? abstract designs?) images along the rooflines and the very colorful images below and between them look particularly good. The multi-colored bricks set them off very well.

I *love* the photo of the couple perfectly framed, like a miniature portrait, by the imposing ancestral hall.

Knowing that you try to avoid taking pictures of people you don't know, I wonder if you paused before taking this shot or did you eagerly take advantage of their turned backs! ;)

Just to be clear: the Tang chung Ling Ancestral Hall isn't just for Tang clan members from one but, instead, several villages. But, yes, even then, I found it surprisingly impressive -- and such a wonderful sight to behold after walking for a couple hours in muggy weather. :)

Have to admit that I *very* eagerly took advantage of that couple's turned backs. ;b

These are the places I definitely want to visit the next time I'm in HK!

Hope you go to those places -- and thus beyond the usual touristy Hong Kong -- on your next visit! :)