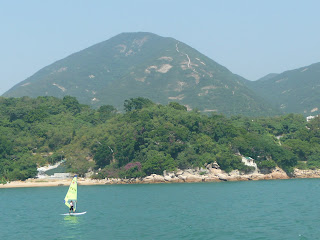 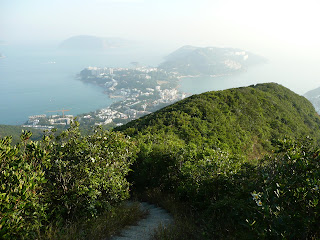 View of Stanley (town and peninsula)
and surrounding bays from near the top
of that same hill earlier today!
I feel so tired I can hardly think or write straight. The reason? I went on a hike earlier today that included hikes up (and then down) the two Hong Kong Island hills known as the Twins. On paper and compared to other peaks in the Big Lychee, they're not that high -- with the northern Twin being only the 105th highest peak in the territory (at 363 meters) and the southern Twin being just the 93rd highest peak (at 386 meters). (Go here for a list of Hong Kong's highest mountains, peaks and hills.)

But the hike did involve two hills -- rather than just a single one -- and what people have estimated as being between 2,000 to 3,000 steps. And... well, just look at the photos above! (And yes, this is one of those cases where I feel that pictures do tell a story better than mere facts and words.)

So what else do I feel other than tired and somewhat achey? A sense of achievement, actually. And an "at last!" euphoria -- because I had first caught sight of the (northern peak of the) Twins more than two years ago and now have finally climbed what I have come to think for some time now as pretty intimidating hills! :)

What looks to be a path up (and down) the southernmost hill seems extremely steep at least in some places. One of those things we discover only by doing them is that walking down a hill can be a challenge, although a different one, from walking up. At least I have found that to be the case. Aerobically much easier but can cause some real jolts to one's (at least this one's) knees and back.

There is the front of a house peeking out from the trees also in the first picture. Being on the oceanfront it looks like it would be prime real estate.

The citizens and officials of Hong Kong must be very organized and systematic--indicated not only by so many of them living peacably in such a small area but also their penchant for counting and labelling. That official Hong Kong has not only measure and counted all the hills and peaks in its territory but published the list shows they really value knowing every detail about their place in the world.

Asides like that (or the one from last summer mentioning that a huge percentage of the people of HK trusted their police department) are yet another reason that this blog is such a delight--a lot of interesting and possibly telling information about an intriguing spot.

Yes, I can personally vouch for it being so that that path is extremely steep in places! And agreed that walking down a hill can be a challenge -- not just walking up. (I must admit that steep, non-concrete paths down an open part of a hill often have me fearing that I'll slip and fall headfirst down!)

A correction though: that's not a house on the ocean front -- rather, it's a shrine. And considering its location, wouldn't be surprised if it's a shrine to Tin Hau, the goddess of the sea.

Also, while it's true that Hong Kong officials do seem to be very into measuring and counting, the list I linked to actually is from Wikipedia. Though having said this, no doubt those compiling the list were helped a lot by such as Hong Kong's amazing country maps. (And their urban area maps aren't too shabby either!) :)

Nice but now can we have pictures of the real Twins? I miss them!

Sorry, no -- not least because the one and only time I saw Charlene Choi (in Langham Place Mall), it took me a while to realize it was her (and thus didn't take any photos) and Gillian Chung is one of those celebrities I've yet to catch sight of in real life!

And you may miss them but... I think they're gone -- at least as a duo. For while Charlene's doing such as appearing in the upcoming "Storm Warriors II", Gillian's reduced to doing stuff like ads for "Tough Jeans"... :S

Hi, I too heard about this place and yet I saw photos in online only. Yet your post on his is bit good all other stuff I referred regarding this.Thanks

Thanks for your comments but I have to admit that I'm not sure what your second sentence means. Can you please clarify?