The week after heading deep into the heart of the New Territories to Ho Pui, I went back to hiking on Hong Kong Island. Although some will assume otherwise, this hike -- that started just off King's Road, close to the Quarry Bay MTR station, and ended up in Wong Nai Chung Gap via Quarry Gap (AKA Tai Fung Au), Boa Vista Hill and other parts of Tai Tam Country Park -- actually was tougher than the one that my mother and I went on in the New Territories.

As a matter of fact, even though it really was not a supremely hard hike, our original party of five diminished to just two fairly early on when the three 20-something-year-old locals in our group experienced difficulty even ascending up to Quarry Gap along the paved but admittedly fairly steep Mount Parker Road! And while this probably says more about their lack of fitness, a general lesson to be learned from this is that hiking in Hong Kong, even on Hong Kong Island, isn't necessarily something one should do with scant preparation.
Alternatively, the flip side to this are the great vistas and natural sights to be seen even without having to go all that far away from "civilisation". And if nothing else, I hope that the following photos will help people appreciate that -- and be attracted to go on a hike in Hong Kong some time themselves! 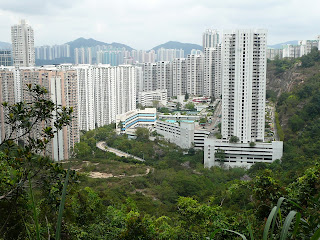 Early on as one ascends up Mount Parker Road,
the views to be had are more urban than country 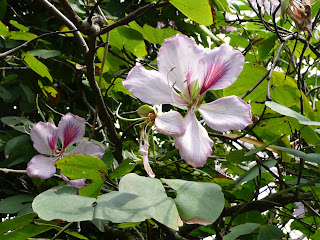 Still, one is already sufficiently among nature
to catch sights of flowers like these 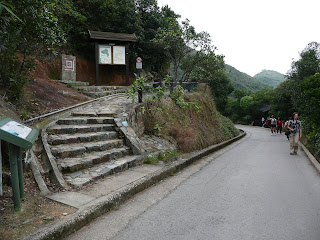 Signs inform us that what are hiking paths now,
the invading Japanese army used to pursue
retreating British troops and their allies in the
Battle of Hong Kong that lasted less
than a month in total in December, 1941 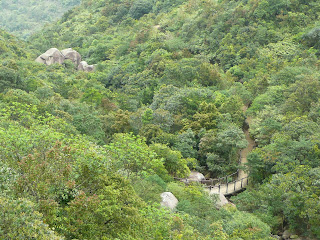 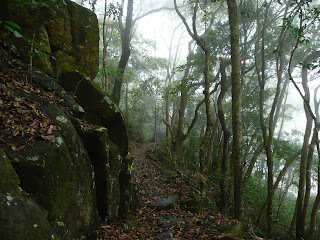 Shortly after we got off the paved road,
it became somewhat scarily misty

For a time, there was also a bit of a worry
that the heavens would burst and rain on us 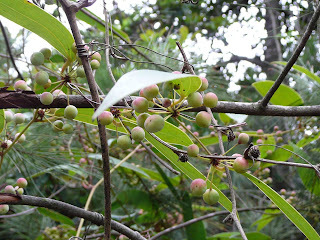 But there were so many interesting sights
to be seen along the way that my hike companion and I
soon couldn't help but enjoy the hike and moment,
and feel considerably de-stressed by it all! 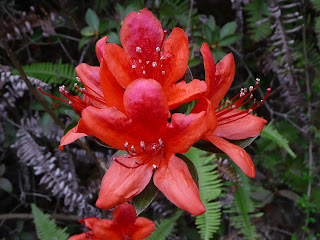 Are these flowers we spotted half way along the hike
red azaleas? Whatever their name,
they sure are stunning, don't you think? :)
(And yes, you read right -- this photo-essay only takes one half way through the hike, with more beauty and photographs to come... ;b )

Great photos, YTSL! I think I want this to be my first Hong Kong. The fact that it starts so close to where I usually stay is very convenient. I just need to plan my next visit during cooler weather.

Christmas should be nice, Dave, right?

Very nice photos. I liked the misty one especially. And the one where it is about to rain.

I finally showed a few people at work some of my pics from the trip -- mainly the Peak and Macau -- and I'm glad that I'm already planning a return visit!

November-March is when the weather's good for hiking. When you next come over, I'll show you where to buy hiking books and maps of such here in Hong Kong, and direct you to a couple of convenient starting points for hikes. Find a willing hike companion (I do take seriously official injunctions to not hike alone) and then you can be away! :)

Er... er... December is nice but... should you plan on going hiking, do please not make the mistake of the people who couldn't complete even half of this hike by taking the physical requirements of hiking in Hong Kong too lightly!

Thanks YTSL! I've been intending to hike the past several trips. Next time for sure! :D

You're welcome. Especially if you come in cool weather and the air's clear, do give hiking here a try. Hong Kong really does have a natural side and it can be ever so beautiful.

Again wonderful photos. Each photo essay becomes the "one" hike I would like to go on.

Teehee re your "one" hike comments. Have to say that there aren't many hikes I have regretted going on here. Something else I've found is how different seasons and weather can contribute to making hikes along the same trail feel so very different. But for that highly recommend November-March as the optimal hiking time of the year here in Hong Kong.