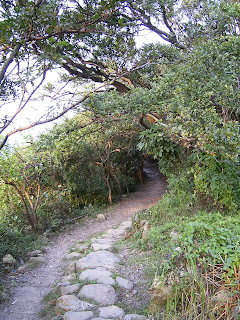 Who knows where
one's path in life will lead? 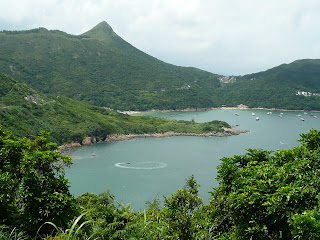 All I know is that I currently live
in a beautiful part of the world... 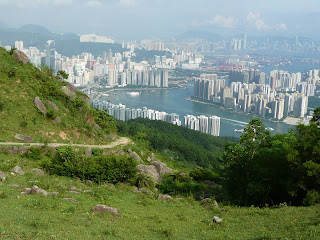 ...and one good way of being grateful
for this state of affairs is to go about
appreciating and enjoying it as much as I can :)
Many years ago, an uncle memorably teased me about my then being at an age whereby I was too old for pigtails but too young for cocktails. Well, I am definitely old enough for cocktails (including my favorite vodka martini -- with olives in the mix for added flavor) now, thank you very much! And, in fact, I even am getting fairly comfortable with being labeled middle-aged these days (although -- no lie! -- as late as a year ago, a friend of friend mistook me for a student still!).

Also, unlike on my 21st and 30th birthdays, I have long passed feeling upset about hitting a landmark age and not having achieved what I had wished to have done by that stage in my life. In fact, I tend to no longer set goals for myself that have to be achieved by X date or Y year. And so much so that when such as prospective employers ask me "Where do you see yourself in five years?", I tell them honestly that I tend to not so much aim to be at a certain place within that particular period of time but, instead, evaluate where I am every six months or so and if I am happy enough with where I am, I stay on the same course, and if not, go about making the adjustments and changes I think are necessary at that point in time.

Moreover, right now as I write this, I still have no idea what I am going to do in the next few hours, only that I. Will. Not. Be. Working. Today -- having taken the day off on account of it being my birthday.

(At the same time though, I do know already at this point that I'm supposed to meet some friends for Peking Duck dinner this evening, attend a dance show tomorrow evening (with a friend in tow), then watch an Arsenal game with other friends later that evening, take in a screening of Clara Law's Floating Life on Sunday and attend a preview of a much-anticipated film on Tuesday evening (with still other friends)! But beyond that... and having to return to work on Monday... ;b )

To be sure, I am not so egoistical as to think the world does or even should revolve around me. And I try to pay my dues and be tolerant to a certain extent about things (and people!) I don't like because, well, life and the world can't be perfect however much one would like it to be. Furthermore, I try to not take advantage of others even while I do go about taking advantage of what I have and has been bestowed on me by fate, family, friends and others. In other words, I seek to pursue life and the enjoyment of it -- and in such a way that my doing so doesn't mean that others aren't able to do so too!

Happy birthday, YTSL! I wish I could celebrate with you. I'll buy you a drink the next time I see you in Hong Kong. ;D

Happy Birthday!! Sounds like you have enjoyable activities planned for your long weekend.

I like your perspective, I don't think age should define us or our goals. Plans are great but just living one day at a time is so much easier and less stressful

Have a wonderful, adventurous, stress-free, happy, healthy, & full of riches that you want and need, birthday

Reading the post carefully I gather that this was a milestone birthday? And I think I can guess which one, LOL!

No worries. I think your philosophy is very practical and admirable.

Thank you -- and so far, so good re enjoying my long weekend. :)

I'll hold you to that drink offer and will take you to a nice bar when you next come over to Hong Kong for a visit. :b

Thanks and yes, it's not a completely jam-packed long weekend -- by my standards -- but hopefully will be pretty enjoyable. :)

Thanks for your commments and good wishes. They're much appreciated. :)

Um, actually, I think I know what milestone birthday you're thinking of -- in which case I passed it a few years back! Honestly though, I started losing track of how old I am a few years past 30... it didn't seem to matter so much after that particular milestone b-day! :D

Happy Birthday and I wish you many happy birthdays more with your loved ones in your beloved city :)

A very happy birthday to you

Happy B'day, Yvonne!
It must be good hiking HK in autumn.

A very happy birthday to you! Because of that, I can even forgive you the Arsenal match. :)

Thanks for your b-day wishes and "beloved city" is about right, I guess. ;)

Alas, September is not yet really autumn in Hong Kong. I had thought of hiking yesterday but it was too hot! (BTW, do I know you by another name??)

Teehee -- and well, "at least" (for you) the Arsenal match isn't taking place on my actual birthday... ;b