In the wake of Koppu 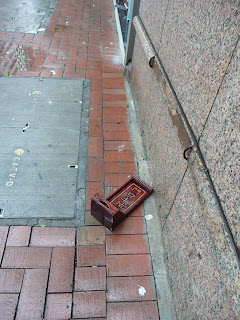 Even a shrine is not immune from nature's wrath 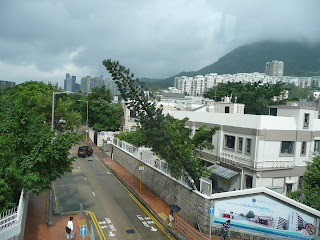 An even more dramatic demonstration of
Typhoon Koppu's strength
Earlier this week, Typhoon Koppu blew into Hong Kong. By the time it blew out of Hong Kong less than 24 hours later, it had left a fair amount of damage in its wake. Although the typhoon signal "only" went up to 8 with Koppu, I swear that its winds were stronger than an earlier typhoon this summer which went all the way up to 9 in the middle of the night but which I nonetheless slept right through.

This time around, however, I couldn't sleep completely easily -- not least because the glass door between my bedroom and balcony rattled quite a bit throughout the night. It also didn't help that the typhoon threatened to disrupt what usually is my busiest work day of the week -- and, in fact, when I went to work that day (yesterday), it actually still was officially Typhoon Signal Number 8 (only the Hong Kong Observatory also issued reports that the typhoon would be downgraded later in the morning -- and in fact was).

On the walk to meet my shuttle bus, I saw such sights as heavy bus stop signs strewn about like they had been knocked out by a super-strength boxer and at least one small shrine wrenched out of its place and blown several feet away. On the bus ride to work, more evidence could be found that the typhoon had had quite the effect on huge swathes of Hong Kong.

All in all, if any reminding was needed, it goes to show how powerful nature can be and how humans really should not risk its wrath. And yet people continue to live where nature can threaten and contribute to such as global warming -- which, among other things, may well have a hand in making typhoons and hurricanes that much worse. Something to think about; especially in a summer that has seen its share of Typhoon 8s and above along with lots of "very hot" days here in Hong Kong and beyond (be it Paris, Portland or elsewhere entirely)... :S

The pedestrians in that second photo would be well advised not only to look left and right, but up as well! ;)

I must admit I would feel a little uneasy with just a glass door between my bed and typhoon winds.

Just to let you know: three days on after Koppu, that tree's been removed! And yeah, most days I like my glass door but on typhoon days (and, especially nights)... ;S

Details like bus stop signs being tossed about show how fierce the wind was--everyone is familiar with bottom-heavy signs like that which are made so that they don't move so when they do it is by something powerful.

Looking at one of the links, the environment bureau in Hong Kong is committed to quantifying the effects of storms, right down to the "five reports of loose scaffolding and one report of a fallen external wall" although for those of us who get our main view of Hong Kong from the movies, based on 1980s police dramas one would expect more reports since it seems that every second tall structure in the SAR had a scaffolding on it, always nearby when a villian needed to make a quick escape and a great venue for an action scene. :--)

There actually really still is a lot of scaffolding in Hong Kong -- but a lot of it actually is firmly bound together, pretty stable, etc. After all, people really do work on them! :D

Yikes..... entertaining photos of what wind can do...this said knowing you're okay.