Fun in Hong Kong on the cheap 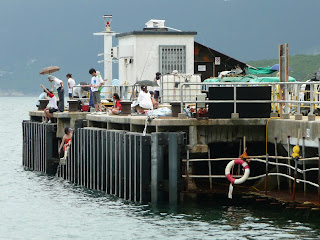 Fishing fun on the pier at Joss House Bay 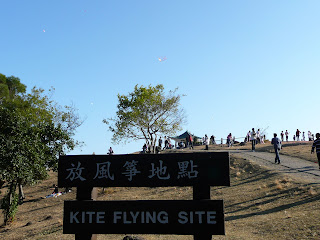 Another fun suggestion: go fly a kite! ;b
Earlier this week, a local colleague shocked me by giving credence to a stereotype I've seen too much evidence to the contrary to completely believe (even when espoused by a local): i.e., that Hong Kongers are only interested in making money. Indeed, one of the things my mother and I have commented to each other more than once now is how it really looks to be the case that Hong Kongers work hard but they sure know how to play as well!

And to those to argue that it's hard to enjoy oneself in Hong Kong without (much) money, here's going ahead and suggesting seven super activities to engage in that are free (or pretty much close to it):-

1) Go hiking in one of Hong Kong's 24 country parks or other parts of its vast countryside. (And if you want to make a real adventure of it, consider camping in the 38 designated camp sites throughout the territory!)

2) Don't forget that Hong Kong has a number of urban parks and gardens -- to which entry is free. Among my favorites are the Tang Dynasty-style Nan Lian Garden and the classical Chinese style Kowloon Walled City Park while in terms of location, the Wong Nai Chung Reservoir Park really is hard to beat!

3) Check out one or more of Hong Kong's various -- and quite varied in terms of subject matter as well as size! -- museums whose low entry fees make them a major bargain. (N.B. Even more of a bargain, entrance to such international class establishments as the Hong Kong Museum of History and Hong Kong Heritage Museum is free on Wednesdays!)

4) Although it's admittedly not an activity I've indulged in in years (as I don't have the requisite patience it calls for), I've seen lots of people happily fishing (for leisure and pleasure, as opposed to commercially) in various sections of Hong Kong, including on both sides of Victoria Harbour along with some of the 17 reservoirs where fishing is allowed with a license.

5) Another activity I've observed quite a few Hong Kongers happily partaking in is kite-flying -- and not just at such designated kite flying sites as the one on a hill in Tai Hang Tun over in Clear Water Bay Country Park but also at other often windy locales like the Plover Cove Reservoir's main dam.

6) For entertainment in air conditioned comfort, it's hard to beat the Hong Kong Film Archive. A facility that seems under-utilised and -known, it's where I have, in the two and half years since moving to Hong Kong, got to see many cinematic gems, including Battleship Potemkin, Dancing Bull, On the Waterfront, Sorrows of the Forbidden City and The Loyal 47 Ronin --quite a few for as little as HK$30 a screening!

7) Lastly (but not least!), while it's true enough that tickets to some performing arts events can cost quite a bit, free shows and concerts also are to be regularly had at such as the Hong Kong Cultural Centre (whose offerings include free pipe organ concerts) and the University of Hong Kong.
And at the risk of sounding preachy, amazingly a lot of the above suggested activities surely also are either good for your health or intellect, and sometimes even both!

I think the HK Tourism Board should hire you based upon this post!

Seriously, after 8 days, I felt like I had just seen the surface of Hong Kong and the only times I felt like it was an expensive place to visit were when I was in an overpriced restaurant.

The HK Heritage Museum is quite nice, affordable, and getting there in the New Territories makes for a nice train ride as well.

I used to fish when I was a kid and I was tempted to do it again near the Avenue of Stars but figured I'd probably get in trouble for doing it. It's legal to fish there with a license?

Haha... I've got to agree with Glenn!

YTSL, you are true blue Hong Kong booster and always pointing out what makes it such a great city.

BTW, I know you hike a lot, but have you camped out yet?

I actually think it would be cool to work for the HK Tourism Board but at the same time, sometimes wonder if all they would like tourists to do in Hong Kong is go shopping! In any event, would encourage you to venture beyond Sha Tin in the New Territories as the New Territories is so much more than that sprawling town! ;b

Re fishing where the Avenue of the Stars is: it seems legal enough in that I've seen plenty of people fish there and thereabouts.

I've not camped out since my sophomore summer when I spent a couple of months camping out in the desert while attending archaeology field school. But there has been a camp site or two in Hong Kong that I've seen while out hiking that has got me tempted -- and I have a couple of Hong Konger friends who have been camping in the territory.

One of the difficulties with working for the Tourism Board is that they not only want visitors to have a good time but want them to spend money while they are doing so.

That said, having a guide to free or cheap attractions from someone who not only lives in HK but who has both done and enjoyed the activities she writes about is invaluable.

New York City is another expensive place that is full of great stuff to do that costs little or nothing.

First, a confession: I used to work as a tourism planner... albeit for a private Malaysian firm (rather than the Hong Kong tourism board). You're right to some extent in that the authorities would want visitors to spend money -- I'd argue though that if you get them to spend more days and nights in a place, then they'd be spending more money since accomodation often is the major expense as far as travelers are concerned!