As long-time readers of this blog know, I've long maintained that my home state of Penang is the food capital of Malaysia as well as a general food(ie) paradise. Until now, however, I've not thought to put up a photo-essay devoted entirely to showcasing some of what Penang has to offer in terms of culinary delights.

One reason for this is that, often times, my natural inclination upon seeing the food in front of me is to start tucking into it ASAP -- and I have to admit that among the dishes that disappeared before I even thought to take photos of them on this most recent visit back to Penang was a very nicely crispy-skinned suckling pig that I ate on my first night back home and plates of shrimp that were coated with salt, then baked whole, that were part of last night's seafood feast at a wonderful family-run restaurant called Crab Village!

Somehow, however, I managed to control myself every so often. So I hope you'll thank rather than curse me for taking, and then presenting to you, the following photos:- 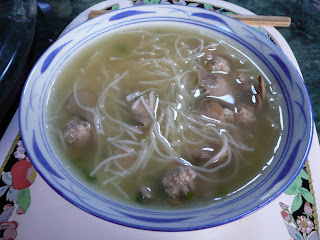 There's an eatery in Perak Lane that may be more famous
for its fish head beehoon (rice noodle) soup
but my preference is to have the noodle soup with pork balls
(not what you might think!) and kidneys (whose magic
looks to stem from their being sliced very thin) 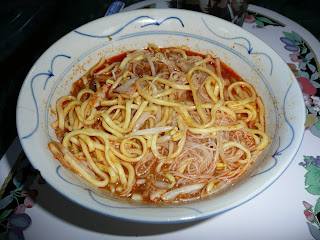 Spicy Hokkien (prawn) mee (egg noodle) soup: One of
a trio of dishes -- along with the above beehoon soup and
the Malay assam laksa cooked up by a grandma
over at Penang's very own Miami Beach! --
that I absolutely must have each time I return home 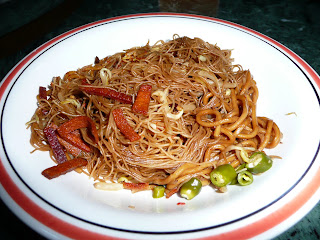 Cheap mee -- what it's called as well as is
(The above combo of fried egg noodles and rice noodles
garnished with hard tofu strips, bean sprouts,
green chili peppers and a spoonful of red chili sauce
cost less than M$2 or 57 US cents!) 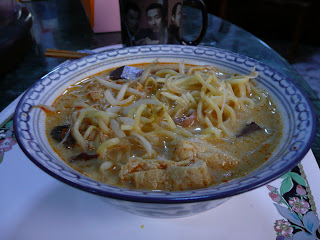 Penang curry mee -- quite distinct from
other Malaysian versions of curry mee,
with a soup made with coconut milk and
ingredients that include cubes of solidified pig's blood! 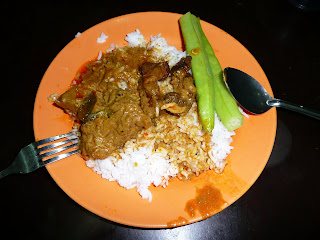 This plate of rice topped with goat curry,
fried chicken kidneys and boiled lady's fingers (AKA okra)
that's an example of Hameediyah's nasi kandar
may not look like much but believe you me
when I tell you that it's absolutely delicious! 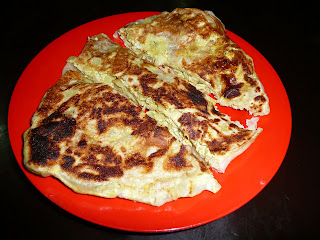 So much so that I had polished it all off by the time my friend's
mutton (goat-meat in Malaysia rather than lamb) murtabak
arrived at the table for her to eat! 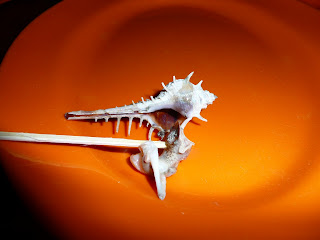 Not an alien but, rather, a delicacy --
think, we told a sceptical English friend, of it
as a spikey aquatic version of escargot! 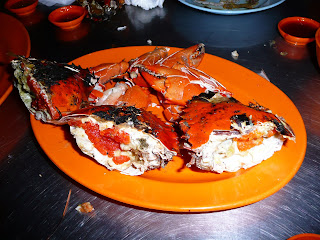 AWESOME! That was better than Anthony Bourdain's episode in Malaysia!

Okra! Do you know how hard it is to find good okra dishes outside of New Orleans or good Indian restaurants?

You've out done yourself. Such delicious looking food! Wonderful photo of the "delicacy". Please (!?) continue the food blogs once you're back in Hong Kong.

Re Anthony Bourdain's episode in Malaysia: If only he realized that he also should have visited Penang...

Re your okra comment: In case you didn't realize, Malaysia also has a significant ethnic Indian population -- and Hameediyah is actually a Malaysian Indian Muslim restaurant.

More re okra: You just reminded me of something I didn't have on this visit to Penang but also love -- fish head curry (with okra and tomatoes floating in the curry alongside the big fish head!)!

Glad you think the food looks delicious. The thing with Malaysian food is that it often is a mix of stuff and consequently doesn't look as aesthetically pleasing as, say, Japanese food.

That all looks totally delicious to me and I know what you mean about tucking in a remembering photos too late.

Happy New Year to you YTSL

Glad that it looks delicious to you and happy new year to you too! (Had to work on new year's day and am feeling somewhat tired, so that's all for me today!)

What can I say other than: next time I'm in Penang, make sure to come visit! ;b

jus came back from penang . had most of the stuff except the spiky escargot thingy..seafood is very expensive.

Expensive is relative: After Hong Kong, everything seemed so cheap! ;b

And yes indeedy re today being Photo Hunt day. Hope you come back to check out my entry! :)