Predawn hike up Seongsan Ilchulbong to see the sun rise from its peak! (Photo-essay)

The majority of visitors to Jeju spend a night (or more) at Seogwipo, over on the southern side of the island.  My party of four didn't do so and, instead, spent two of our three nights in Jeju over to the east in Seongsan, a small town with one very big tourist draw in the form of Seongsan Ilchulbong (aka Sunrise Peak), a tuff cone which rose out of the sea as a result of hydrovolcanic eruptions that occured some five thousand years ago.

On account of it being located on the far eastern edge of Jeju, Seongsan Ilchulbong has the earliest sunset on the island and it's become very much the thing to go see the sun rise from atop this UNESCO World Heritage-listed site's 182-meter-high peak.  So the day after we had an early dinner and a far earlier bed time than we usually do, one of my friends and I got up and went for a predawn hike up Seongsan Ilchubong that we were able to accomplish in far less time (some 20 minutes!) than I had anticipated, with plenty of time to find a prime viewing spot from which to view what turned out to be a truly stunning sunrise... :) 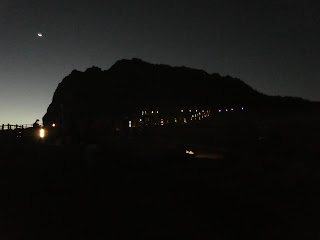 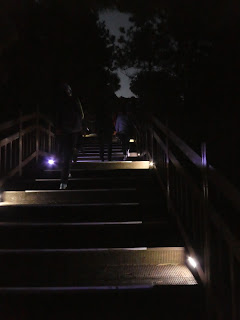 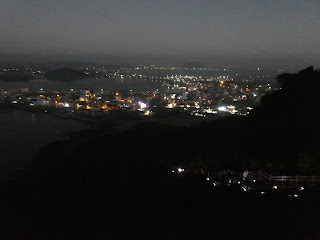 I really was amazed by how far up we got in so short a time! 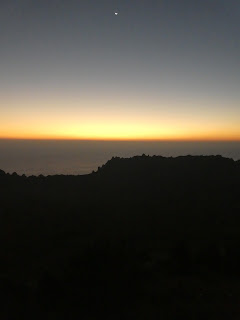 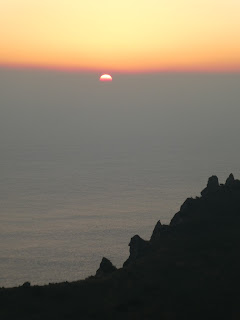 Here comes the sun, looking as though
it's rising out of the grayish-blue sea! 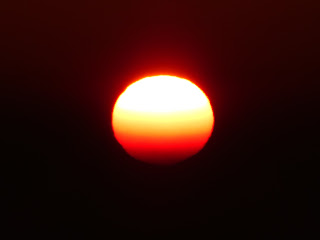 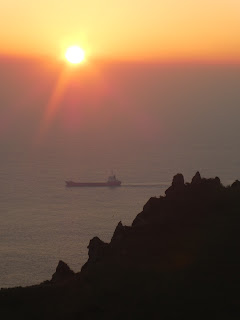 The sun looked to me like it was causing
portions of the horizon to melt! 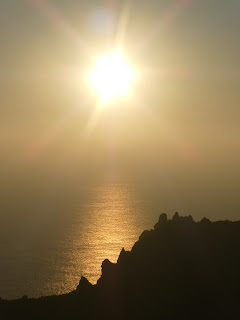 A sunrise that truly was worth the effort to see -- and this
from someone who is far more of a night owl than early bird! :b
Posted by YTSL at 9:27 PM

Have to wonder what you consider a small town. I know in my blog I speak of Bonners Ferry and the town population is about 2,000 people.
Coffee is on

Your predawn hike entry puts the reader in the traveler's footsteps. It may be a vicarious travel experience for the reader, but it comes close to shaking off my morning slumber (and even getting a glimpse of your moon) - to greet the rising sun and possibly feeling the power of what you refer to as "hydrovolcanic eruptions."

5th photo from the top. That looks like a magical sunrise!

I'm glad this photo-essay provided you with a vicarious travel experience! :)

The sunrise really did feel magical. Re that shot you mentioned: I expected to sun to rise from lower down. Didn't realize that that gray was made up both of sky and sea! :D