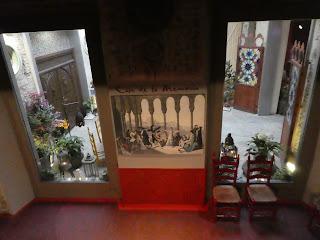 A place where memories get made... 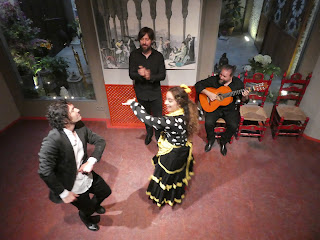 ...in particular those involving flamenco performances :)
I spent two years of the last decade of the previous century in Tanzania conducting research on what's known in Kiswahili (the country's official language) as makumbusho.  While those institutions are known as "museums" in English, the word makumbusho actually literally translates into English as "memories".  So, for Tanzanians, a museum would be a house of memories (and vice versa).
In Sevilla, however, the House of Memories I visited was less a museum in the conventional sesnse than a cultural center dedicated to the Spanish performing art of flamenco.  And it was at that particular Casa de la Memoria that my German friend and I added a flamenco show to our list of cultural events that we've attended together (which already includes a traditional dance performance at Yogyakarta's Kraton, a Christmas Eve concert at Amsterdam's Concertgebouw, an organ recital at Speyer's cathedral and a number of classical music concerts in Hong Kong, including one featuring multi-Grammy award-winning double bassist Edgar Meyer).
To the surprise of those (including my German friend) who thought that flamenco was all about the dance, the evening performance began with musical numbers courtesy of a guitarist and raspy-voiced singer and it wasn't until around the 15 minute mark of the 1 hour show that any dancers appeared on stage.  Once they did so though, they really did come across as the soul of the show -- with the musicians looking to take their cues from the dancers rather than the other way around.
Sometimes, the two featured dancers performed as a pair.  More often than not, however, each dancer performed solo -- and in so doing, were able to show the audience how different and distinct from each other the moves accorded to the male and female dancers are; with the former involving moves that emphasized his physical strength and footwork that produced loud rat-a-tat sounds, and the latter coming across as impassioned and incorporating movements so wildly dramatic that, by the end of one dance, all the flowers that had previously been lodged in the female artiste's hair were strewn on the floor!
If truth be told, dance is probably my least favorite of the performing arts and it took a while for me to enjoy the flamenco show.  Slowly but surely, however, I felt myself drawn into the emotion-infused artistic experience; thanks largely to the dancers who at times hypnotized and other times appeared to be in a trance-like state themselves (this particularly so in the case of the female dancer who had her eyes closed for much of her performance)!  And while I'm not about to make a beeline for any flamenco performances I see scheduled in Hong Kong, I'm glad that I did take in one in a city famous for its flamenco scene and which is said to have this distinctive art form in its soul.
Posted by YTSL at 2:41 PM