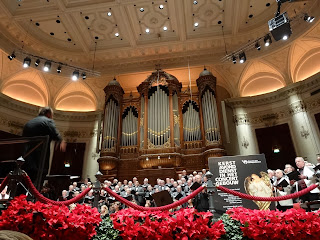 It's hard to beat the Amsterdam's Concertgebouw
as far as concert venues go ;b 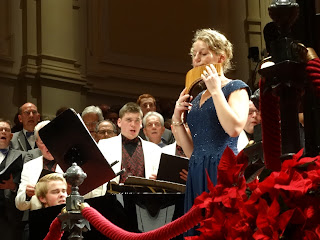 Carina Bossenbroek on the pan flute was a highlight
of the Christmas Eve concert I attended! :)
"We're Hong Kongers!"  That was the reason my German friend -- and fellow Hong Kong permanent resident, post having lived in Hong Kong for seven years and successful application of that official status -- gave me as to why it'd not be a big deal for us to stand in line (for what turned out to be more than an hour) in order to get into a free Christmas Eve concert in the famously acoustically perfect Main Hall of Amsterdam's Concertgebouw.
As it turned out, it wasn't too much of a chore to stand in line for the concert because we spent much of our time in the queue having a fun time chatting with three friendly Amsterdammers: one of whom (the young adult daughter of the two older folks) had spent two years in Shanghai and, like my German friend, knows more Mandarin than me!
Just as surprising, though actually more shocking, was our finding after the concert hall's doors were opened that some Amsterdammers aren't above queue jumping, and a number of others thought little of pushing and shoving to get ahead and in, like it was, say, a punk rock concert rather than a predominantly classical and religious music concert!
The Concertgebouw is home to one of the world's great orchestras.  But rather than have orchestral music courtesy of the Royal Concertgebouw Orchestra, the Christmas Eve concert we attended at this renowned venue featured a range of music that included traditional Christmas songs such as Once in Royal David's City and Joy to the World (with Dutch lyrics but universally recognizable tunes), religious music set to Edward Elgar's Pomp and Circumstance, and Eric Clapton's Tears in Heaven performed by various choirs and individual musicians such as pan flute player Carina Bossenbroek and pianist Mark Brandwijk.
While we had been pre-warned that the concert dialogue's would be Dutch, we actually didn't realize that this Christmas Eve event was a concert cum Christian service.  Afterwards, my German friend asked me if I had minded this being so.  I told her that, to be honest, I had taken the opportunity to grab 40 winks (it had been a long day that had included a canal cruise and visit to Anne Frank's House, after all!) when the preacher had been sermonizing and just focused for the most part on trying to enjoy the well performed music!

It also was interesting to observe the goings on at the Concertegebouw that evening.  Among other things, I was surprised to see some members of the audience think nothing of getting up and going to the toilet in the middle of the concert!  In addition, in start contrast to the Hong Kong performing arts venues administered by the Leisure and Cultural Services Department, it appeared perfectly okay to take photographs before, after and even while the concert was actually taking place -- with at least one person there even using a flash while blithely snapping away during proceedings!
I have to be honest and admit that I was rather taken aback by the behavior that evening of the local concertgoers -- and in general by the behavior of more than one Dutch person who wasn't bothered to queue for public transportation, thought nothing of pushing and shoving in crowded spaces, and smoking marijuana outside -- not just inside -- Amsterdam's many coffeeshops, etc.  (And while we're discussing this kind of thing, here's stating for the record that there's at least one toilet in a Dutch train that would now make my list of worst toilets ever seen in the whole wide world!)
Getting back to the subject of the concert: As my German friend mused afterwards, perhaps it wasn't just the two of us (who can't read Dutch) who hadn't quite realized that it would have a strong religious emphasis!  Or maybe, many of the attendees didn't care about that and were more interested in the event being held in the Main Hall of the Concertgebouw, and free of charge!  Regardless, I think most of the people would agree that it was a musically enjoyable evening in a wonderful concert venue whose acoustics may well have played a significant part in ensuring that the performers that evening sounded really impressive, not just enthusiastic. :)
Posted by YTSL at 10:28 PM