Out-Spanishing the Spanish on our first night out in Spain? 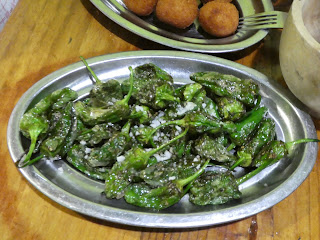 The first dish I ordered in Spain 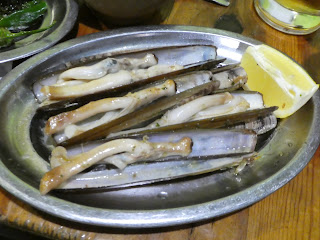 My second dish at the same restaurant 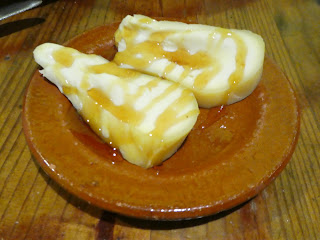 What I had for dessert that evening ;b


Essentially, whenever I journey to another continent, I mentally write off the first day that I'm in the country I've flown to as my routine involves resting, if not outright sleeping, for much of it in a bid to overcome jet lag.  So, after flying into the country and getting over to my accomodation from the airport, pretty much the only other time I actually am out doing anything fairly active on my first day there is when I go out for dinner.

In the case of my recent Spain trip, since my German friend was familiar with my intercontinental routine, she made a point to arrive late enough on my first day for me to have had a good amount of rest but in time to meet up with me in time for what would be a late dinner by our usual standards but was a regular time for the Spanish.  More specifically, it was after 10pm when we finally set off to dine at a restaurant in what turned out to be a great tapas row near our Madrid hotel.


At Taberna Maceira, a rustic eatery serving up Galician specialties that looked welcoming enough that evening, we settled down for the first meal of our Spanish holiday.  After ordering a glass of beer (which I found to be pretty palatable for the nice low price charged!), I decided on a dish that I read about in Pete Brown's entertaining Three Sheets to the Wind.


Pimientes de Padron supposedly consists of a few hot green peppers nestled among a largely not hot bunch.  However, neither my German friend nor I found any green pepper that had a heat level that bothered us -- or, more pertinently, rivalled any chili pepper we've encountered in Asia.  Still, it was an enjoyable enough appetizer that we were both happy to dig into.


In contrast, I was my own for the two other dishes of the night that I ordered.  If my friend were less leery of eating shellfish, I think she also would have enjoyed the navaras (razor clams) served up at the restaurant.  Garnished with garlic and parsley, rather than chilis and black bean sauce more favored by the Cantonese, it was a nice treat -- and gave me an inkling that the Spanish like to eat a lot of things (shellfish, pig and innards come to mind) that are not unlike the Chinese!  And while my friend's not averse to eating cheese, her sweet tooth made her opt for a sweeter dessert than mine, even though my cheese actually ended up being novelly drizzled with honey!

While savoring our desserts, my German friend and I got to realizing that we were the only customers left in the restaurant.  Somehow, on our first night in Spain, it seems that we had gotten to out-Spanishing the Spanish as far as eating dinner late was concerned without even having tried all that hard to do so! ;b
Posted by YTSL at 11:26 PM

When I saw the first photo up there, the first phrase that popped up was 'Spanish Roulette'. I have seen these Padron peppers in AEON last year. I didn't make up my mind to give it a try for I may have to eat the whole pack by myself. But it might be fun if served unannounced in parties.

Teehee re your "Spanish Roulette" comment. I think we found a couple of peppers that were hotter than the others but they were nothing at all like, say, the tiny chili known in Bahasa Malaysia as "cili padi"!

The razor clams sound delicious and the honey dribbled on cheese is new to me and looks tasty. I may dribble some honey on the sharp cheddar cheese I have.

What kind of cheese?

Are those croquetas that I spot behind the pimientos de padron? Out Spanishing the Spanish indeed! And probably downed with a few cañas of fresh draft I bet ... Madrid at its best.

Both and hubby our peppers eaters, even on same plant one can notice heat differences. I believe it how much sunshine and water.
Coffee is on

You have a good eye -- those were indeed croquetas, filled with cheese!

I'm not always a pepper eater but I did like the ones found in Spain and, in fact, ordered Pimientes de Padron at a second eatery later in the trip! :)