First blog post after my first trip to Spain! 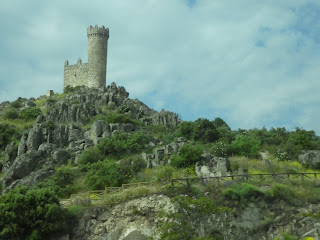 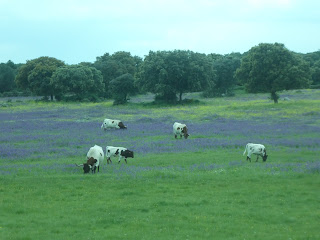 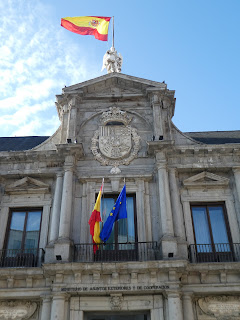 A government building in Madrid
I returned to Hong Kong yesterday afternoon from a trip that took me back to Europe for the first time since early 2016 (which saw me spending the New Year that year as well as Christmas 2015 in the Netherlands).  Like on that previous vacation, I changed planes on both my way from and back to Hong Kong in German airports.  So, thanks to the Schengen set up, the first two stamps on the new passport I got a couple of months ago bear German imprints even though I actually was visiting Spain this time around rather than Deutschland!
Although I had never set foot in Spain before this trip, I already was familiar with a number of Spanish words (including the important gracias (thank you) and cerveza, por favor (beer, please)!) and, also, as befits the country having been a major cultural as well as political power in centuries past, was familiar with the names and works of personalities such as Miguel de Cervantes, Diego Velazquez and Francisco Goya.  Actually, at my undergraduate college, I not only learnt to appreciate the works of a number of Spanish master painters in art history classes but I actually also had taken a couple of Spanish language courses!
In view of my love of art and museums, and preference for pre-20th century art rather than the more modern stuff, Madrid, with its Prado, most definitely was on my list of places in Spain that I considered a "must visit".  After discussions and negotiations with my German friend (who I've travelled with to Indonesia, the Netherlands and Luxembourg with as well as hung out with in Germany, Malaysia and Hong Kong), we also agreed to spend time in the Andalusian cities of Cordoba (whose Mezquita we wanted to check out), Sevilla (which a Spanish colleague of hers had highly recommended visiting) and Granada (whose Alhambra may well be the single most famous historic site in the country).
In addition, I ended up going by myself on day trips to the Royal Monastery of San Lorenzo at El Escorial and Segovia, which the blogger behind the great Paul's Travel Pics had named as his favorite Spanish town.  In the process, I ended up visiting five of Spain's 40 UNESCO World Heritage-listed sites in the little more than a fortnight that I spent in that cultural heritage-rich country (as well as taking four long journey train rides and another four bus rides that took me from Madrid to places not that far away geographically, yet often felt like different worlds)!
All in all, I managed to see quite a bit more of Spain than I thought I would be able to do on this one trip there.  And despite fears (mainly, if truth be told, on the part of my German friend) that all seats would be booked up way in advance on the transport that we wanted to take, we not only managed to make the reservations we wanted and I actually was able to buy bus tickets on the day of my travels.  In addition, thanks in part to tips doled out in Rick Steves' trusty Spain guidebook, we were able to beat the crowds for the most part -- though it's also true that the terrible throngs we encountered in Cordoba played a big part in my ending up deciding to forego visiting Toledo (despite my passion for El Greco) for fear that that ancient city would be the most packed with tourists of all.
On a food note: Spanish food is one of those cuisines I found myself happy to eat day in, day out for more than two weeks -- and yes, I did go ahead and order Spanish jamon (Serrano, Iberico and even Iberico de Bellota) on several occasions!  Even larger than my jamon consumption was my consumption of Spanish beer.  And yes, I admit it: I do count it as one the highlights of the trip that draft beer is available so readily and cheaply in that part of the world! ;b
Posted by YTSL at 11:02 PM

Thanks for your compliments again. So ... out of the five (or six including Madrid) cities you visited, which one turned out to be your fave?

I have the feeling you'd be a Madrid faithful but Spain is full of charming places :)

I'm still thinking about it... maybe Sevilla overall -- though Granada's Alhambra would get my vote for sure as my favorite single site in Spain.

Welcome back :) Spain is my family's favorite holiday destination (their favorite city is Barcelona) however, despite loving Pedro Almodovar films I never had the urge to visit there. It is good that you liked the food :)


I have had experiences in German airports (Frankfurt in my case) that I do not want to recall!!!

Thanks, and it's interesting to hear that Spain is your family's favorite holiday destination!

Re German airports: I've had generally good experiences at both Frankfurt and Munich airport. On my most recent stop at Munich, I managed to make my connecting flight despite the earlier flight having been 50 minutes late and thus giving me just 15 minutes to get from one gate to another. And in Frankfurt once, a Lufthansa recognized Totoro on my passsport cover and commented how cute it was... :)

Yes, they love it here despite complaining about smokers (especially in Madrid) and my mother getting sick after eating a paella on her last day during one of their trips :)


15 minutes from one gate to another!!!!!! Wow that must be some sort of a record! It took me about 30 minutes - maybe a bit more- on both times. But I have no sense of direction and lost my way both times so there is that.

I must say that Spain may well be the country I've been to with the most spokers. Yes, mainland China has a reputation for there being lots of smokers but it seems like a higher percentage of Spanish women smoke along with Spanish men. Add to this that it was often dry and that there was lots of pollen in the air and you can imagine my nasal allergy misery the first few days -- until I discovered Spanish 24 hour anti-histamines!

And yes, I think that must have been some kind of record with the connection -- and think: I managed that even though I also had to pass through immigration along the way!