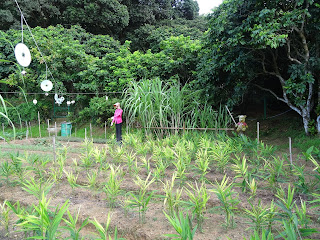 Hong Kong's scarecrow population is actually larger
than many people may think ;b
A couple of friends and I recently talked about phobias that we have and know that other people have.  Among the more unusual that cropped up was the fear of scarecrows.  And while some may think it unlikely that those suffering from formidophobia need worry about being confronted with the objects of their fear here in Hong Kong, here's serving up evidence via the photos at the top of this blog post that it's not all that unusual to spot scarecrows -- along with other devices aimed at scaring away birds and other non-human pests -- in farmed fields in this part of the world, including those that one passes by while out hiking!
Rather than seek to stay away from them, I used to look forward to catching glimpses of scarecrows in the agricultural fields that covered much of the land on both sides of the road to Penang airport when I was a child.  At a certain point, those human-shaped decoys were replaced by rows of tin cans strung up in such a way that they'd rattle when the string to which they were tied would be pulled.
Although those may have been more effective at scaring away pests from the fields, I found them far less visually interesting.  And it's been with no small amount of delight that I've discovered that some farmers in Hong Kong still erect scarecrows in their fields -- be it on their own or along with other pest-scaring devices.
While I've seen a number of human-shaped scarecrows here in Hong Kong, I've also come across those whose creators looked to have been inspired to produce something more whimsical.  In addition, I've spotted more than one cute plushie being used in a more practical way than their designers and manufacturers probably ever anticipated!
Along with having to fight the urge to rescue certain cute plushies from their scarecrow duties, I've sometimes also had to resist going and checking the titles of the shiny discs that used to have been CDs, VCDs or DVDs but now also have been re-purposed to scare away pests from agricultural fields and vegetable patches here in Hong Kong.  Actually, as one fellow film fan cum hiking enthusiast as pointed out, it probably would be pretty traumatizing if we were to find that a DVD or even VCD of a movie we really love was now hanging out in the open and damaged by the elements rather than treated with the respect we would accord it! ;(
Posted by YTSL at 11:59 PM

I've thought of doing up a scarecrow before. But haven't I don't think it would keep the deer away.
Coffee is on

Love the scarecrows and other hanging objects used to scare away garden eating animals. And unfortunately I can imagine humans stopping for a snack too.

One afternoon at the bookstore where I work I went out on the porch and saw a woman digging up of some of the flowers, etc planted there! Mid-afternoon, broad daylight!!!! When I asked her what she was doing she told me she wasn't taking much and was leaving. I stood there with my mouth open and watched her drive off.

I'm not sure how effective a scarecrow would be at keeping the deer away but I reckon it might be a fun addition to your garden/field! ;b

OMG at the thought of humans stopping for a snack in those fields and gardens -- and your story about the woman who thought nothing of digging up some flowers grown by the bookstore folks! :O

Some of the scarecrows are so eerie and scary.... especially when it's getting dark.
LOL