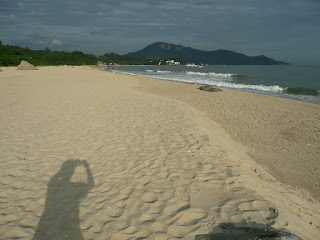 Consider how the locals would feel if this beautiful beach
had thousands of mines laid on its surface...

The 40th Hong Kong International Film Festival officially drew to a close yesterday but extra screenings have been announced to extend the fest by a day.  For my part, I'll continue to review films I viewed at this year's HKIFF for the next few days; not least because I'd like to do my part to spread the word about those movies that should be best avoided but also those worthy cinematic offerings that can slip under mainstream radars!

Among the better films I opted to check out over the past two weeks was the taut and often tense period drama that went on to become the Signis Award winner at the film festival.  A co-production of two countries that had been on opposite sides during the Second World War, Land of Mine draws attention to two million landmines having been placed by the Germans along the west coast of Denmark during that terribly damaging global conflict and the victorious forces having subsequently decided that prisoners-of-war from the defeated side would be tasked with removing every single one of those mines by hand before they would be allowed to return home to their Fatherland.

From the viewpoint of someone like the powerful film's protagonist, Danish Sergeant Carl Rasmussen (Roland Mølle), it was only right that people who wore the same uniform as the hated invaders who had placed the mines on his country's beaches be responsible for ensuring that that land be made free of explosives that would kill and maim anyone (or thing) which had the bad fortune to step on them.  Even so, the hardened military man was not expecting that the dozen or so members of the defeated force he was assigned to oversee carrying out this dangerous duty would be teenagers who looked, and often acted, more like boys than men.

Told that "Denmark is not your friend", this understandably fearful group of German prisoners-of-war includes an officer whose fluffy facial hair gives a good indication of how young he still is (Joel Basman), natural leader Sebastian (Louis Hoffman) and inseparable twin brothers Ernst and Werner (Emil and Oskar Buschow).  Initially given hope by Sergeant Rasmussen telling them that they'd be allowed to go home after locating and disarming the 45,000 mines on the stretch of beach they were assigned to clear, the realities of their hellish situation -- one where they are cared for less and treated worse than their commander's pet dog -- becomes clearer and clearer by the day, and with each fatality that slowly but surely decimates their group.

Although the Danes were lauded for their humanism in ensuring that the majority of the country's Jews escape the fate that the Nazis had sought for them, the uncompassionate behavior of many of them against their defeated enemy after the declared end of hostilities also is a matter of record.  As director-scriptwriter Martin Zandvliet shows with Land of Mine, war too often makes people hate, and this enmity can continue even after a conflict officially is over, with many embittered individuals out there coming to believe that two wrongs can make a right.

There may be folks out there who wonder why Danish filmmakers would dredge up this unsavory section of their country's past some seven decades after the events that inspired this work occurred.  The answer may lie in Land of Mine delivering the important and always pertinent message that, amidst the inhumanity and horror, genuine emotional bonds and connections can be forged between unlikely individuals -- and a supposed enemy may take it upon himself to save others lives, even at no great risk to himself.