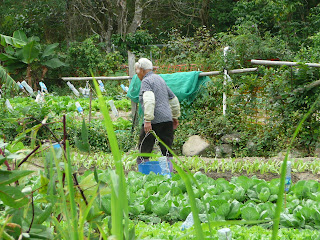 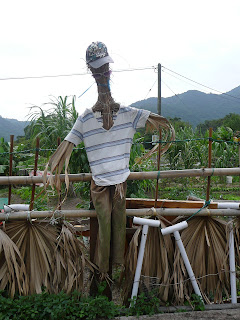 At a nearby plot, no one was out and about
-- but this scarecrow was on duty there 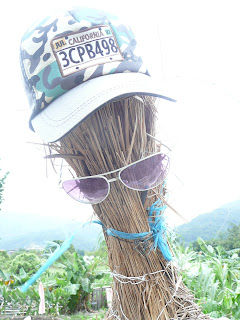 A close up shot of the top of this scarecrow reveals
that some imagination was involved in its creation ;b

Farming is an activity that one doesn't associate with Hong Kong -- for good reason.  In statistical terms, only 18 square kilometers out of the Big Lychee's total landmass -- which measures 1,104 square kilometers -- is being actively farmed.  And while there is a "city farming" movement among some Hong Kong residents who fear that the food products that the territory largely gets from Mainland China is too likely to be tainted, the fact of the matter is that agriculture is a sunset industry in Hong Kong.

Often while out hiking, I've passed by now overgrown as well as disused farm land.  This was the case once more earlier today when two friends and I hiked from Tung Chung to Mui Wo via Pak Mong, Ngau Kwu Long and A Po Long.

At a few points of the trek though (notably Pak Mong and Pak Ngan Heung -- two villages famed for their fung shui woods), we also saw cultivated farm land and also a few people out working on their vegetable plots though.  A visible sign of farming being a sunset industry in Hong Kong was that all the people I saw cultivating their land this afternoon were elderly -- and, interestingly, elderly women at that.  At the same time, at least one vegetable patch's scarecrows got me thinking that its cultivator was from a younger generation because, well, it just looked too "hip" to be otherwise! ;b
Posted by YTSL at 11:03 PM

Delightful picture of the ageless vegetable gardener and what looks to be a well-tended and productive garden. Just about the last thing I would think of regarding Hong Kong and all the more lovely due to its incongruity.

Thanks for your comments. I love coming across parts of Hong Kong that are not what most people expect -- sometimes including myself. :)