Clouds and dewdrops on a Cloudy Hill hike 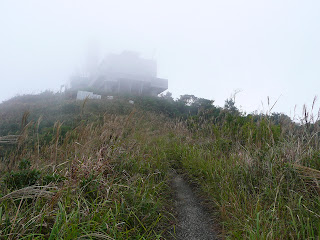 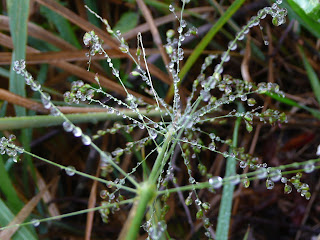 Dew on leaves make for a pretty picture to me :)

Earlier today, two friends and I went on a hike that took us from the area near Hok Tau Irrigation Reservoir up 440 meter high Cloudy Hill then down to Sha Lo Tung before dropping further down to -- and ending our hike at -- Fung Yuen (famed for its butterfly preserve -- which we did not visit this afternoon but definitely plan to at some point in the future).


I had trekked up Cloudy Hill along a different route back in January with one of the other members of today's party and another hiking buddy -- and had visited Hok Tau and Sha Lo Tung twice before with different friends from the two in my company this afternoon.  But it was fun and satisfying to get to the same places via different routes -- often because there's the promise of literally getting different views and perspectives of the places one's come to know this way.


Due to this afternoon being on the cloudy side up on the well-named Cloudy Hill though, I actually didn't get the panoramic vistas that I was hoping to get from its summit.  And if truth be told, the trail from Hok Tau Irrigation Reservoir up Cloudy Hill (essentially the first few kilometers of Wilson Trail Stage 9, but in reverse) is on the wooded side, with few openings from which to get scenic views.  But after getting down to the point where we were below the clouds, the trail down Cloudy Hill to Sha Lo Tung and Fung Yuen yielded some cool sights -- of the scenes down below but, also, the cloudy summit from where we had descended.

At the same time, it's also true enough that some of my favorite sights of today's hike were such as the close-up views of dewdrops on spiderwebs, blades of grass, and leaves and other bits of plants.  For because this afternoon's weather was on the cloudy and humid -- as well as cool (considerably more so, in fact, than the previous Sunday) -- side, those dewdrops hadn't evaporated this late in the day.

Granted that I wished that there had been less moisture on the steps down to Sha Lo Tung -- not least because they caused me to slip and fall down a few of them this afternoon!  Fortunately, the outcome was just a few scratches and scrapes on one arm and dusty/muddy patches on the butt area of my trousers -- so no major harm done, and I'm still left with far more positive than negative memories of today's excursion! :)
Posted by YTSL at 10:46 PM

I LOVE that middle photo!