Hard to eat but delicious if you put your mind to it?! 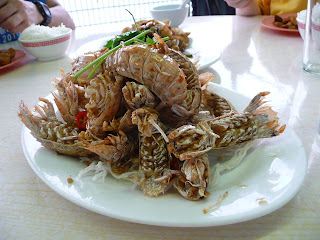 Mantis shrimp may look on the buggy side
but really can be very delicious indeed! 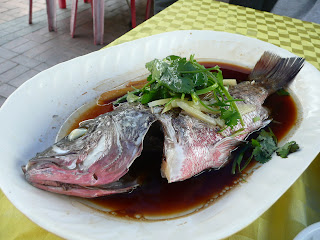 I don't know what kind of fish this is but can tell you that
when steamed with ginger, scallions and soy sauce in the
classic Cantonese style, it does taste pretty good  :b

In recent weeks, I've had two friends whom I've known for more than a decade now separately come over from the US for a visit.  I got to know them through passionate discussions about Hong Kong cinema over on the once very lively Mobius Home Video Forum's Asian Cinema discussion board and knew that they are people with an interest in many facets of Hong Kong culture and society, including its food as well as movies.
So I didn't think too much of sitting down two Sundays with one of them and another friend -- who I also met via the Mobius Home Video Forum(!) but who has lived in Hong Kong for over seven years now -- for a post-hike dinner at Wah Kee, and ordering dishes that included a steamed whole fish (in the classic Cantonese style) and a large plate of mantis shrimp deep fried with garlic and chili peppers.
But as we got started on the meal, I started wondering if I had ordered the wrong things as my visiting friend was looking to be having a bit of a problem dealing with the fish bones and the mantis shrimp shells, etc.  Alternatively put, I felt like I was having a Fuschia Dunlop moment -- particularly the one she recounted in her Shark's Fin and Sichuan Pepper: A Sweet-Sour Memoir of China that involved her introducing her visiting parents to her favorite local food when she was living in Sichuan, and suddenly realizing that they comprised what most Westerners would consider "hard to eat" stuff!
Fortunately, my visiting friend assured me, when I asked, that he was okay eating the food -- even though he might be on the slow side eating them since he was experiencing a bit of difficulty picking out the bits that could be eaten (and guarding to make sure that he wouldn't be eating bits he shouldn't!).  And since he did end up eating a pretty large number of mantis shrimp over the course of the meal, I figured it was safe to assume that he was indeed telling the truth!
Still, the experience of watching him struggle a bit with the food had me asking my other visiting friend what he was prepared to eat before I placed the order at the Cheung Chau seafood restaurant I took him to the following Saturday.  Happily for me, the website master of The Illuminated Lantern told me he was game for pretty much anything.  So I felt able once more to order a plate of whole steamed fish -- which I love but don't often eat since I have difficulty finishing one by myself! -- for the second weekend running along with other dishes I love while eating at Hong Kee "Respaurant" and figured he would too.
Incidentally, my two "must have" dishes at Hong Kee are the steamed garlic squid which is absolutely divine -- and what appears to be the restaurant's own invention: fried seafood rolls that come up with a huge dollop of mayonnaise to dip them in.  My friend was a bit shocked when I told him beforehand about the mayonnaise but he appeared to enjoy the decadence of the dish as much as I did -- and every other person I've introduced to it, including a local Cantonese friend who pointed out that this particular dish is not listed on the restaurant's Chinese language menu! ;b
Posted by YTSL at 6:09 PM

Cantonese is my favorite style of steamed whole fish and... hehe... maybe one day my eating skills will improve enough so I don't end up with a mouthful of skinny bones at least one time per fish.

Cool to know you're another fan of Cantonese style steamed fish. Re your skills eating it: practice makes perfect -- so keep on working at it! ;b

Mantis shrimp are my #1 favorite at the moment. I find a pair of scissors makes them easier to eat. I always order them at any seafood place now, along with the scallops served on the shell with garlic, chives and glass noodles.

The first time I ate mantis shrimp, I think they were out of season or something as I found them pretty expensive. But Wah Kee's got a very reasonable priced set menu for 4 people with a large dish of mantis shrimp as part of the deal.

Oh, and I like those scallops served on the shell with garlic, chives and glass noodles too! :)

I'm beginning to think there's a mantis shrimp initiation fee -- they hit you with some outrageous "seafood price" one time and forever after you pay close attention!

You got hit too? In fairness, I did ask re the price and they told me but because I wanted to try it, I said okay anyway. Still, it put me off eating mantis shrimp for a long time -- but now there's at least one place where it's reasonably priced and tastes great... ;b

My diving instructor was really excited that he had spotted a mantis shrimp on a dive recently. Apparently they are quite rare to see in HK waters... this might be why :-S

Yeah, sorry... they are so delicious I guess many people can't resist! ;S