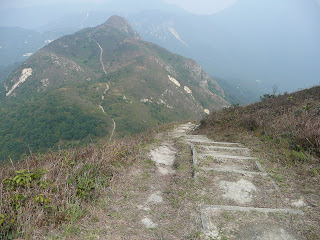 While it's true enough that most Hong Kong hikes
yield their share of mountainous or hilly vistas... 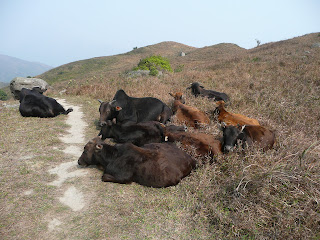 ...I do think it's pretty unusual to come across a herd
of super placid cows near the summit of 490 meter high
Ling Wui Shan -- like was my experience earlier today! :O 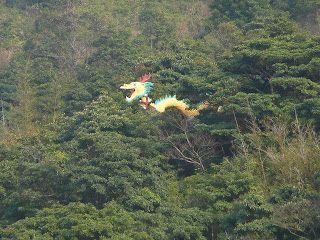 Many probably will be of the opinion that it's even more
singular to spot a flying dragon (statue) while out hiking
-- in Hong Kong, or anywhere else for that matter! :D 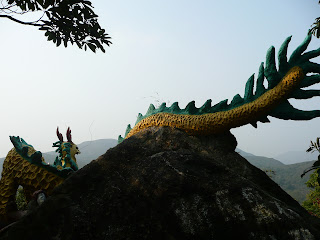 Since it's such a rare sight, I simply had to go take
a closer look at -- and photo of -- the thing...! ;b
Earlier today, a friend who began hiking with me last September and I went on a very enjoyable hike -- whose completion gave us a nice sense of accomplishment -- along Lantau Trail Stages 5 and 6. (Since Lantau Trail Stage 5 ends far from any roads, those going on it must then go along Stage 6 or another walking trail in order to get to a place where they can get a bus or taxi.)

Our 11 kilometer hike took us into parts of Hong Kong where few people venture and up three peaks, including the very summits of Hong Kong's 56th and 64th highest hills. As one might expect, such a route offered up some splendid natural vistas -- which we were able to appreciate even though today was one with less optimally clear air than we wish could be the case.

Less expected, however, was our coming across a herd of cows basking in the sun a stone's throw away from the top of the highest hill we climbed today -- though it could be said that there were plentiful signs of their presence on the hike up in the shape of several cow patties, some of which were considerably fresher than the others! Honestly, until I saw them with my very own eyes today, I never would have thought that cows would be able to climb up such steep inclines as the ones we were on earlier today!

Although some might be surprised at the sight of a flying dragon in this part of the Big Lychee, I actually wasn't -- because years ago, when doing research for an article about dragons in Hong Kong, I learnt of the existence of the flying dragon statue built by the Venerable Master Hua who also founded the nearby Tsz Hing Monastery. Still, I have to say that it's quite the experience to see it in the setting in which it is located -- but will also state that this colorful but rather obviously amateur-constructed statue actually is more impressive viewed from afar rather than up close! ;D

Wow... very cool! Both the cows and the dragon. Proof of the payoffs when you tread the less beaten paths.

And thanks for the link to your article. I never realized what made up HK's dragon logo. Very clever!

Is the Tsz Hing Monastery obscured by the trees in the picture of its dragon? One of the things that makes the flying dragon statue seem even more odd is that it is just emerging from a forest with nothing around it. Must be quite a site seeing it for the first time, particularly if you come over a hill or around a curve and suddenly there is a dragon in the distance.

Like duriandave I am impressed with the HK logo--I thought it was just a stylized dragon. Clever indeed.

Am glad you like the photos -- and yeah, that was a less beaten path alright. Think we passed fewer than 10 people on the entire 5 hour hike!

And you're welcome to the link to that article. Apparently it's so good/popular, it's been published twice by bc magazine! ;b

To answer your question: The Tsz Hing Monastery buildings proper are actually some ways down the same hill from the flying dragon.

The approach that I took made it so that you had to be on the look out to see the flying dragon. But after rounding a corner... there it was... so obviously visible! ;b

Sounds like you had a fun hike. Cows and Dragons! Did the cows take notice of you or were they too tired? They look very tired in the photo. And how delightful to see the colorful dragon in the green trees.

Yes, we really did have a fun hike.

Re the cows: they looked at us but didn't otherwise move -- and yeah, I'm guessing they were tired... or just too intent on basking in the sun! :)

Hi YTSL, wow I can see why this hike made your 2012 Best list. Amazing scenery and the dragon statue is very cool.

Another wonderful aspect of the hike -- there were few other people about in the area that day! :)