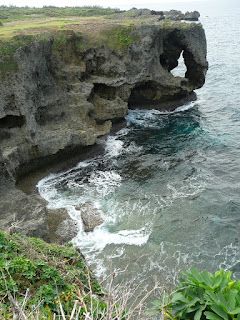 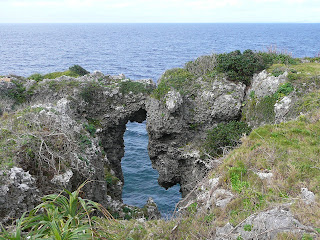 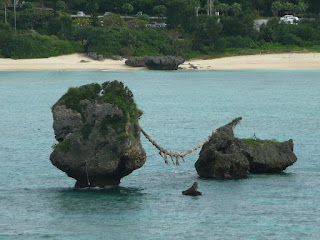 These two islands joined together by a rope
that I viewed from that vantage point surely
have an interesting story surrounding them...
Two weeks ago, I was in Okinawa. Perhaps because that part of Japan feels like a majorly different world from Hong Kong -- particularly since one place represents an idyllic vacation spot for me whereas the other is the often super intense and busy place where I live and work -- the time that I was there actually feels like it was further in my past than a mere two weeks ago.

Indeed, I had to check the calendar to make sure that it really was the case that just two Sundays ago from today that I had strolled about the green area atop the coral reef cliffs at Manzamo and beheld breathtakingly beautiful views like the ones in the photographs at the top of this blog entry.

Located just off Highway 58 on Okinawa Honto, Manzamo faces the East China Sea and is part of the Okinawa-Kaigan Quasi-National Park. A splendidly scenic spot, it invariably attracts a number of visitors -- almost all of whom were either Japanese- or Cantonese-speaking. (The definite sense I had from my visit to Japan's southernmost prefecture is that the vast majority of tourists visiting it are Japanese from other parts of the country -- and that Hong Kongers make up a dominant percentage of Okinawa's non-Japanese visitors.)

Strangely, however, neither of the two guide books I've used on my recent trips to Japan (i.e., the third (i.e. 2005) edition of The Rough Guide to Japan and the current edition of Frommer's Japan) give Manzamo so much as a mention. And ditto re Japan-guide.com -- an on-line resource that I've found pretty helpful and useful when visiting other parts of that East Asian country.

Especially when reading Frommer's Japan, I wonder if English-speaking visitors to Okinawa are predominantly Americans whose greatest knowledge of, and interest in, this part of Japan stems from it having been the only part of the country on which ground battles -- and horrifically bloody ones that saw hundreds of thousands of casualties at that -- were waged during World War II? (And I guess this may well be so, what with there being 14 American military bases on Okinawa.)

In any event, I have to say that I'm glad that the two American friends with whom I had an Okinawan rendez-vous shared my preference for checking out Okinawa's beautiful natural sights over visiting sites where large numbers of people -- civilians as well as military personnel -- prematurely lost their lives, and in terribly violent ways at that. For even while I do realize that it is important to not forget the past, I also do not want to dwell too much on its sadder parts -- and prefer to be able to enjoy and celebrate the fact that beauty exists in this part of the world which, particularly after a visit to the Okinawan Prefectural Museum, I came away from a visit realizing has seen its share of tragedy yet still has endured.
Posted by YTSL at 9:45 PM

Hi YTSL, wow what a beautiful place and I love your photos. In the first photo that really does look like an elephant's truck. Manzamo looks like a beautiful and wonderful place to visit. I'm glad to read that you enjoyed your trip.

I'm glad that I managed to give you an idea of Manzamo's beauty. And I'm also happy that you're checking out my non-Photo Hunt posts as well as Photo Hunt entries. :)

What a beautiful place it must be. I love your photos.
I've not visited for a while as life has (yet again!) been rather stressful and left me little time to myself. Seems to be easing a bit now, so maybe I'll be able to drop in more often.

Lovely photos, thank you for sharing.

Also I'm looking forward for the food photos that you probably have taken.

Thanks for visiting. I'm glad that life is less stressful now for you -- not least since it means your having more time to visit my blog. :)

You're welcome re the sharing but hmmm re the food photos. I didn't take that many on my Okinawa trip, actually!

Stunning rock formations! I hadn't recognised the elephant's truck until you pointed it out though.

Stunning indeed -- and eye-catching at the very least, right? :b