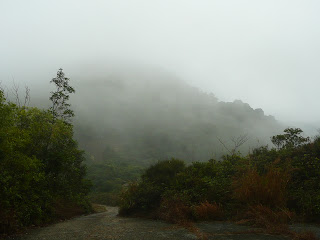 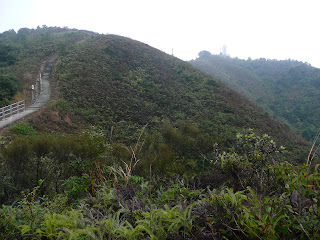 Fortunately, the visibility began to noticeably
increase a few minutes after we began
our descent along the other side of the hill 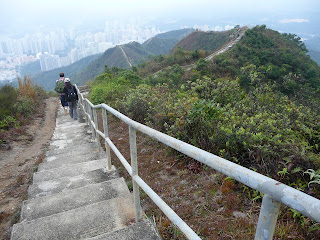 While it was somewhat intimidating to see how far we
still had to go to get down, it really was pretty nice to be
able to have the splendid views we did from Cloudy Hill :)
One December years ago (so long ago, in fact, that one of my regular hiking companions -- yes, we've been joined by another since September 2010 -- was not born then!), I paid my first visit to Hong Kong with my parents and a Singaporean family of four. Since Hong Kong isn't that far away from Penang (i.e., only about 15 degrees latitude further north) and its latitudinal location has it in the tropics, I don't think we -- adults and children alike -- were prepared for temperatures to drop as low as they did during our visit. (Hence one of my strongest memories of that trip involving the children in the party getting bundled into a store and emerging with new thick coats to help us stay warmer!)

As I write this line, temperatures of 7.5, 5.5 and 9.1 degrees Celsius are being reported on the Weather Underground of Hong Kong website for Victoria Peak, Ngong Ping and Tai Po respectively. While that is not low at all compared to temperatures I've experienced when I lived in Wisconsin (AKA The Siberia of America), it really is all relative -- and I have to say that I felt plenty cold -- not just cool (in more ways than one) -- earlier today when I was standing up on the summit of Cloudy Hill, the 440 meter high hill located just north of Tai Po whose Cantonese name of Kau Lung Hang Shan sounds like it can mean Nine Dragons Going (up a) Hill (i.e., Going Hiking)!

As it so happens, we burned up so much energy on the way up Cloudy Hill that we literally looked like we were steaming at some points during our hike -- and, indeed, we not only were actually sweating from our exertions but also had to stop a couple of times to peel off what ended up feeling like superfluous extra layers of clothing. But the summit as well as southern portion of Cloudy Hill were pretty windy -- and soon, we found ourselves putting back those layers of clothing we had peeled off not even an hour previously.

Perhaps the best way to convey a sense of how cold it felt up there is that I ended up electing against holding on to the railings on my descent -- because the metal was so very cold to the touch! At the same time though, I have to state my gratefulness that there were railings within clutching distance on much of the route down -- because, if nothing else, I felt assured that there would be something nearby that I could grab if the wind got any stronger and threatened to blow me off the formidable-looking hill that I've regularly viewed from a lower level for some years now and whose ascent I looked upon as one of those Hong Kong hiking challenges that I'd consider an achievement upon accomplishing. :)

Wow these is beautiful. I see the city landscape in the background. Awesome shot!

Thanks for liking the photo(s). Re the third photo: the sight of country and urban so close to one another is something I think of as really Hong Kong -- and do like it a lot. :)

Or as the Hokkien say: Keong Hee Huat Chye! :)

I was going to post that it seems to be a long way down in the last image but then realized you and your friend would be hiking up and down for quite a while. Lovely area and a good workout!

Yes, it was quite an up and down hill kind of hike -- but actually pretty enjoyable since, as you say, it was a lovely area and the whole excursion provided my friends and I with a good workout. :)