Along Stage 10 of the Lantau Trail (Photo-essay)

Early on in my hiking exploration of Hong Kong, I looked upon the Lantau Trail with a degree of awe and fear; and this even though I knew that its 70 kilometers are divided into 12 stages (and thus aren't usually completed over the course of a single hike). This was in no small part due to my knowing that the Lantau Trail includes treks up to near the top of 869-meter-high Sunset Peak and up to the summit of 934-meter-high Lantau Peak, the third and second highest mountains in Hong Kong respectively.

However, after I got more familiar with Hong Kong's country trails, I discovered that certain stages of the Lantau Trail (including Stages 7, 8 and 9 between Shui Hau and Tai O -- which I've completed (see sample photo-essays here, here and here), albeit in reverse) aren't all that daunting. Thus it was, that one day last summer, I set out with a friend to hike Lantau Trail Stage 10 and the few extra kilometers more that would get us from the end point of that stage down to the beach(es) at Cheung Sha:- 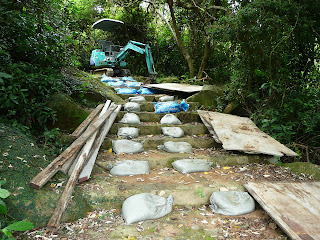 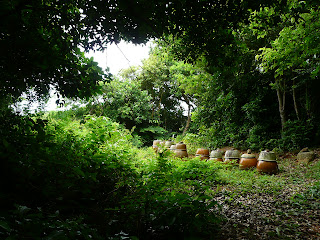 Also spotted early on in our hike: the kind of urns that
one associates with human remains in Hong Kong 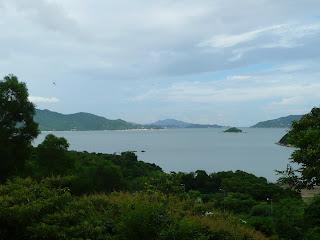 Fortunately, a few minutes later into the hike,
views like this opened up to occupy our attention 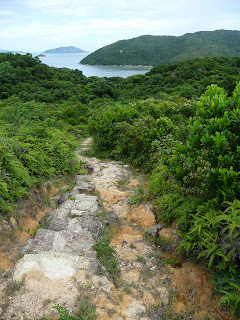 When hiking along a trail, it pays to pause and
turn back every once in a while to check out
the views that can be pretty scenic (as well as
helps you gauge how far you've already gone) 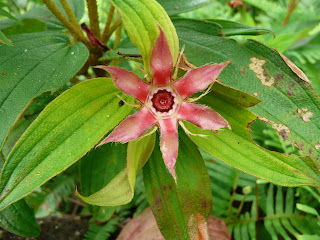 An interesting looking wild flower
whose name I don't know (but wish I did!) ;S 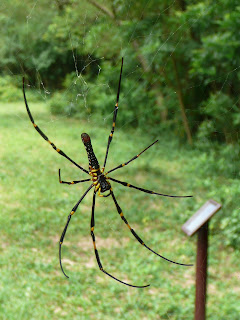 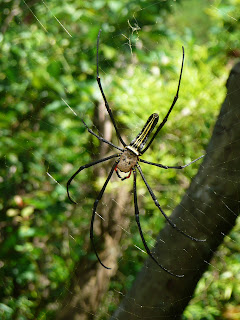 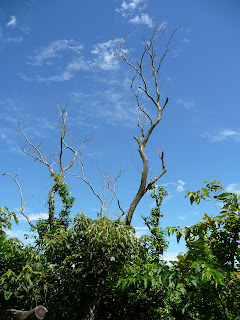 And should you wonder: yes, it was a
beautifully bright blue sky day that day :)
To be continued in one more photo-essay at least... :)

What a fun looking turquoise backhoe (here they're usually yellow). Hehehe...were you tempted to drive the backhoe? Are those bags of cement for steps?

Wow, what a good photos of the spider.

Believe it or not, I wasn't tempted at all to drive that backhoe! :D

Re the bags of cements: I think they were there to ease the passage of that backhoe up those steps.

And thanks for appreciating the spider photos: I like them a lot (too). :)