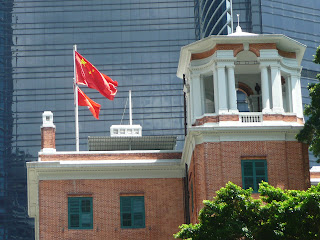 On this day fourteen years ago, Hong Kong was handed back over to China by the British. Seventy six years before that -- and thus 90 years ago today, the Chinese Communist Party was founded in Shanghai.

To commemorate the latter event, the directors of The Founding of the Republic, got together to make a sort of sequel to that cameo-studded blockbuster propaganda epic. Originally entitled The Founding of the Party, the similarly cameo-filled film that tells an approved version of how the Chinese Communist Party came into being and the roots for the Chinese Communist revolution were laid is now more bombastically called The Beginning of the Great Revival.

Running at close to two hours long, this Mainland Chinese film (which features appearances by a number of Hong Kong thespians and John Woo) covers events taking between the years 1911 and 1921 in such a way that certain key historical developments feel like they were given short shrift in favor of fluffy scenes detailing such as romantic moments between a patriotic general (portrayed by Andy Lau) and his concubine (played by the decades younger Angelababy), and Mao Zedong (essayed by Liu Ye) and his first wife, Yang Kaihui (played by Li Qin), and ones in which Chow Yun Fat is given lots of room to strut about as Yuan Shikai, the general who deposed an emperor and then pronounced himself one.

Although Mao Zedong is the film's major personality, he actually doesn't dominate the picture as much as some people might assume. Also somewhat surprising is the characterization of this (in)famous historical figure as an individual who wasn't especially commanding or impressive in the company of such as Beijing University students and faculty -- though upon further examination, it does make some sense to portray the man from Hunan in such as a way that strengthens claims that he truly was a man of the people (as opposed to, say, someone from an inherited elite and privileged background).

By far the most jaw-dropping part and aspect of Beginning of the Great Revival though is its scenes of the May 4th Movement; not least because the stirring scenes of student demonstrations and protests surely cannot help but recall those that took place in the summer of 1989 in the same country. Upon viewing them, one will understand how stories have been circulating of this propaganda film actually having run into trouble with the censors -- and a super heavy-handed (and consequently clunky) coda being required to be attached to this cinematic offering; because even while the messages being shouted in that section of the film are in line with the nationalism that is being encouraged, the actions of angry youth challenging and confronting establishment figures and braving armed forces can easily be interpreted as showing sympathy for a (still) discouraged cause.

If viewed solely for entertainment, Beginning of the Great Revival will surely be looked upon as a disappointment. If judged on cinematic merit, it would be considered a mixed bag, at best --not least because it appears to be such a hodgepodge of genres: historical drama, action (with a particular scene depicting Zhu De (aka Chu Teh) as a most impressive sharpshooting hero as well as military leader being arguably the one most likely to get one's adrenaline going), suspense thriller and, most improbably, romance.

For my part though, I found this film to make for very intriguing viewing -- including in terms of reading how certain historical personalities and events are (allowed to be) portrayed. And even though it provided me with fewer instances of inadvertent humor than The Founding of the Republic, I was sufficiently captivated throughout the work's 118 minutes -- and, as shocking as this might be to some people, am actually considering re-watching this supposed "sincere tribute" to the Chinese Communist Party once more before its run in Hong Kong cinemas comes to an end!

My rating for the film: 6 as a film (but it'd be higher as material to think about and with!)

Hi YTSL! I actually had the opportunity to see this at a special screening organized for the Chinese consulate in San Francisco.

I pretty much agree with what you said, including wanting to see it a second time. While I'm not ignorant when it comes to Chinese history, I only know the broadest facts about this fascinating period. The movie definitely made me want to learn more.

For example, I could easily watch an entire movie just about Wang Huiwu (played by Zhou Xun). In Beginning of the Great Revival, she's reduced to a handful of mystical glamor shots, but her story alone would be just as compelling as the grand narrative of Great Revival.

On the other hand, I totally understand those Chinese who think this movie is total bullshit.

Finally, I'm very curious to see Jackie Chan's upcoming film about the 1911 Revolution and how it compares to this.

It must have been an interesting experience to view this in the US with the Chinese consulate as the host! Would I be correct that no one dared to titter during the screening? (I have to admit that I giggled at the super glammed-up treatments of such as Angelababy, Fan Bingbing and Zhou Xun.)

Thanks for the link to the info re Wang Huiwu and definitely agree that her story alone would be worth a film. That's one of the thing that frustrates me when people keep on remaking movies: there are so many interesting stories still un-filmed. Why won't filmmakers make films about them instead?

Yeah, it definitely was an interesting experience. The Chinese press was there taking photos and interviewing people.

And you're quite right, there was no tittering. Heck, even I was afraid to titter! But there was plenty of murmuring whenever a familiar star made their brief appearance.

For "The Founding of the Republic", I attended its official premiere in Hong Kong. At first, the friend I went with and I tried to stay serious (or quiet) during the screening but we lost it in the scene when Mao is shown drunk (and thereby felt at liberty to giggle re other similarly (inadvertently) funny scenes).

Maybe that's why we didn't score invitations to this new film's official premiere... Ah well! ;b

Yep. You both sound like a pair of ignoramuses... hope you are both emigres, or foreigners? i.e. New China is too good for the likes of you :-)

How about you try to further enlighten us rather than insult us then? Or are you in fact saying we are too good for "New China" since you end your comments with a smiley face? (Sorry, I'm too ignorant to truly, unequivocally "get" what you are trying to say.)

Your typically excellent review made me realize that I might actually want to see "Beginning of the Great Revival" when it becomes available.

The parallels to the May 4 movement must have been particularly poignant. Sometimes the censors for authoritarian states miss the most obvious things or were so caught up in the scenes of the gallant young men and women confronting power in the streets that they missed the connection.

Thanks for your kind words. And yes, I do think that flaws and all, this film deserves a watch.

Re the May 4 movement scenes: I'm going to look on the positive side and hope that their not being cut is a sign in favor of the government... though the filmmakers being required to add a coda to the movie is not.