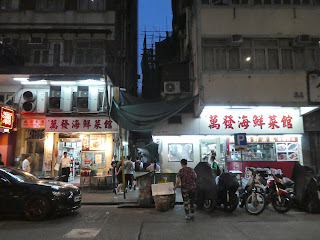 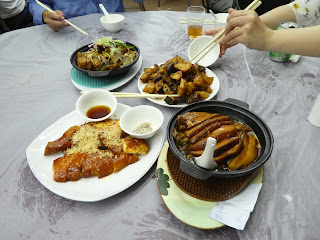 Delicious brown food on the table 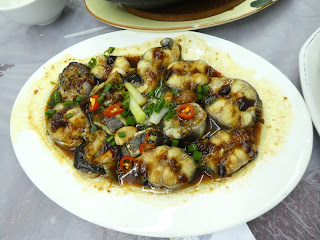 Ugly (but) delicious?
First off: apologies for the lack of blog posts in recent days -- and no, it wasn't because I was out of Hong Kong but, rather, because I've been feeling so sick that I not only lost my appetite but couldn't stand to think much about food for a time!  Although I'm still not fully recovered from my latest bout of cold (or is it flu, or -- perish the thought -- sinus infection?!), I'm at least able to stand looking at photos of food and fondly recalling a good meal once more.  So here's going ahead and sharing my memories of a dinner I had two Mondays ago at a very old school, local restaurant that was heaving with people on what's usually the least busy night of the week for restaurants.
Although my host referred to it as a dai pai dong, the Man Fat Seafood Restaurant is not an open-air establishment.  Rather, its kitchen is housed in what would usually be the space for an entire eatery or single store on the ground floor of a Sham Shui Po tong lau and it has dining areas in not one but three other locations on both sides of the street on which it's situated.  (Of interest too to diners will be the fact that smoking appears to be allowed at at least one of its dining areas, which is distinguished by its doorway being open rather than having a door in it and the space looking to be un-air-conditioned, unlike those sections of the restaurants where smoking is verbotem.)
My party of seven was thankfully allocated a table in the non-smoking sction of the restaurant and were quickly served four of the five dishes we originally ordered, with the final dish following not far behind.  As one would expect at a place with "seafood" in its title, we made sure to include some seafood into our order -- and I most definitely have no complaints about the fish head we ordered (which was chopped up into chopstickable chunks and slathered with an unrecognizable but tasty brown sauce) nor the eel with black bean sauce that all of my party (who included a couple of Americans and one Briton along with three Hong Kong-born women and myself) proceeded to consume with relish.
As it turned out though, it was a beef and glazed potato dish that turned out to be the most popular of the night; with the potatoes being the surprise star of the show more so than the beef!  Also super satisfying to my mind was the generous serving of pork belly with pickled vegetables, a classic Cantonese dish that the traditionalists among us feel has to have decadently fatty pork belly like what we were served at Man Fat Seafood Restaurant for it to qualify as the real McCoy -- and goes so very well with white rice.
About the only sub-par dish of the night for me was Man Fat's version of a dish known at Tung Po as "wind sand chicken" -- but I think I only felt disappointed by it because I've tasted better elsewhere.  And so generally happy with what we had ordered that we decided to order one more dish -- only our mixed vegetables turned out to be two dishes: one in a pot of soup; the other stir-fried with chilli; and both with seafood added to them!

After having consumed what amounted to a veritable feast, we were pleasantly surprised to find that our total bill (which included three large bottles of beer and a couple of soft drinks) ended up being a bargain HK$903 (~US$115).  With that in mind, I really am happy to traipse to Sham Shui Po again for dinner in the not so distant future; only, next time, I hope the bus I'm on won't have a couple of heavily coughing and snuffling passengers who I look upon as the prime suspects for having infected me with whatever virus (hopefully, just that for the common cold) that they were infected with! ;(
Posted by YTSL at 9:55 PM

Thanks for your good wishes!