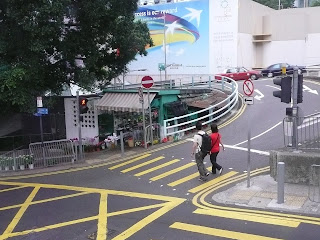 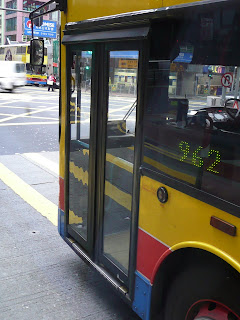 The last time around that stripes were the theme of a Photo Hunt, I offered up a trio of photos of pedestrian road-crossing zones, the classic example of which are known as zebra crossing because of their visual similarity to zebra stripes. But because the markings in Hong Kong have yellow stripes on the road rather than are black and white (like in other parts of the world including Britain and Malaysia), they -- which I find to be interesting photographic subjects -- are actually called tiger crossings!

One and half years on, I find myself drawn again to putting up photos of tiger crossings; albeit different ones -- and in one case in particular, of a markedly different scale -- from the last time around. More specifically, the upper photo is of a little section of Hong Kong that remains small-scale (note the small size of the flower shop as well as the short length of the tiger crossing) in an area of the territory known for increasingly towering constructions along with deep pockets.

Meanwhile, for the second photo, I went less for one of my "artistic" shots. Put another way, I like the visual sight created by zebra crossing stripes being reflected onto -- and creating the optical illusion of looking like they continue right onto -- a bus door's glass. (And for those who don't see anything special in that vision: well, these are the kinds of things that one looks out for to make one's regular commute to work less boring than it can be! ;b )

Tiger crossing?! Now I know why a Hong Konger friend call their zebra crossing that.

How long did you wait in order to shoot the second picture? :)

HK has B&W zebra crossings as well, and, like the UK ones, are not controlled by traffic lights. They don't work as well in HK because their safe use relies heavily on car drivers being vastly more considerate than the ones I encounter on a daily basis in HK.

Tiger crossings. I love it. Great photos and information as always YTSL.b

My STRIPES is here.

We are on the same wavelength this week.

You know I've never heard of the crosswalk being called tiger or zebra crossing before.

I can't wait to use the term tiger crossing. I didn't realize the stripes in the second picture were a reflection until I read your explanation.

Nice one. I've never heard of tiger crossings either!

hahaha! so true...i see a lot of interesting things when stuck in traffic. great stripes!

I like your stripes and this is the first time I heard about crosswalks being called tiger or zebra crossing! I wish we have more of this in Phnom Penh.

I like how the crossing seems to bleed into the bus

I didn't wait long at all to take the second photo, actually. Rather, I glanced about, saw the sight and quickly snapped the photo before my bus or the bus in the picture moved again! :D

Hmmm... I actually find car drivers in Hong Kong more considerate than in many other places in the world. AND traffic in central parts of the territory slower than others -- and thus more suitable for pedestrians! :D

Thanks as usual for reading, looking and appreciating. :)

Thanks -- and hope you have a good weekend too. :)

Now you've got me thinking: I wonder if zebra crossings -- or at least that term -- are a British commonwealth thing?

Tiger crossings in a concrete jungle. Sounds quite fantastical, doesn't it? :D

When not in a hurry, being stuck in traffic can indeed be interesting if you let your eye and mind wander... ;b

Is there a lot of motorised traffic in Phnom Penh? If so, guess you definitely could use more zebra and tiger crossings!

love what you did with this week's theme.

Love the reflection on the bus doors too. Have a great weekend.

That looks like an inviting part of town in the first photo. And the reflection in the second is very cool!

Lots of stripes in that picture! Good shot.

Hi there! I've been missing from Photo Hunt for a while and thought I'd stop by and visit many of my photo hunt friends. Those are perfect for the stripe them...and interesting, as well. Blessings!

The bus picture is very cool. The reflection is perfect with the stripes already on the bus. We don't have the zebra/tiger style of cross walks here in the US. I think they would be more effective if we did.

i always learn something new here. the stripes reflection on the door glass is pretty cool.

I love the reflected stripes on the bus. Great choices for the theme. Happy weekend.

Thanks for appreciating both of the photos. :)

Actually, there are two photos in this entry... ;b

Welcome back to Photo Hunting and will try to get back to visiting Pollywog Creek each Saturday. :)

Yeah, I wonder why the US doesn't adopt the zebra and tiger stripes on roads...

Thanks for reading and looking. :)

I enjoy these local Hong Kong photos a lot as they give a sense of what one sees /does there in daily life. I think the ripple line effect in the bus door reflection adds more interest to the photo.

This is the most famous zebra crossing in the world.

I had the same idea with zebra crossing, lol !

Great stripes. We don't have zebra crossings here, but we should have. . .

Glad you enjoy my local Hong Kong photos a lot but wish they would whet your appetite more to come over and take such photos yourself... Maybe next year? ;b

Yeah, that seems to be the more liked of the two photos in this entry!

Teehee re your candidate for most famous zebra crossing in the world! :D

So I take it that there are zebra crossings too in Belgium(?)!

Yeah, zebra crossings can be really helpful to pedestrians. Tiger crossings too! :b

Until I read your explanation, I thought the bus' door had stripes. Nice photos.
Su-sieee! Mac
This and That. Here and There. Now, Sometimes Then.

hmm...so, that's what they're called. interesting! good captures! have a good weekend!

Heheh... thanks for reading as well as looking then! :)

Thanks and yes, I had a pretty good weekend. Hope you did too. :)