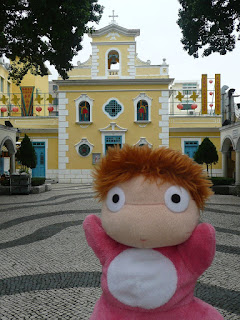 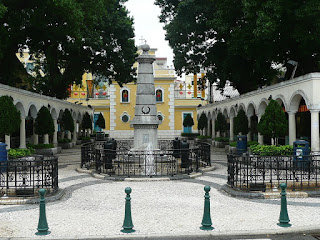 This time around, it's to Macau (for just a day)
Two weeks ago today, when my mother was here in Hong Kong for a visit, I took her to the former Portuguese enclave of Macau for a day. Although now -- like Hong Kong -- a Special Administrative Region of the People's Republic of China, it has its own special feel... and a markedly different pace of life from the Big Lychee; and this especially out in Coloane, the southern section of the territory which used to be a separate island from -- but now is joined by the reclaimed land known as the Cotai Strip to -- the now far more built-up Taipa.

After traveling by ferry from Hong Kong, we went straight from the ferry terminal to Fernando's, the legendary Portuguese restaurant that -- when it's not crowded (like was fortunately the case when we visited) -- can be a pleasantly relaxing place to eat at. Then after a a stroll about nearby Hac Sa Beach (whose lack of cleanliness I found sadly disappointing -- especially compared to the better Hong Kong beaches), we decided that our stomachs could handle some food again and made for Coloane village -- specifically, the sublime egg tarts that came from the ovens of the original branch of Lord Stow's Bakery.

Upon reaching that nicely quiet as well as attractively quaint neck of the woods though, we figured it'd be good to get a bit more exercise and time in between our previous feeding. So we went about strolling Coloane's main esplanade which looks out on to a narrow body of water separating Macau from Zhuhai and that Chinese city itself. And as we made our way south along the road towards its temples to Tam Kung and Tin Hau, we passed a sight that I have to admit that I've been hoping to set my eyes on "in the flesh", so to speak, for a while now -- specifically, after viewing Full-Time Killer close to a decade ago now.

Although I'm hardly the biggest fan of that 2001 Milkyway Image production (as my review of the film for Hong Kong Cinema: View from the Brooklyn Bridge all those years ago shows), that particular place had looked so picturesque that it was almost hard to believe that it was a real space rather than mere movie set. But as the photos at the top of the entry shows, that which involves a square in front of the Chapel of St Francis Xavier that is flanked by restaurants and a monument commemorating a 1910 victory of pirates is one of those places that truly does exist outside of movies!

And lest there be there any doubt: yes, I really do still get a thrill from spotting and/or recognizing a location I first saw in the movies after all these years. On the other hand, if you were to ask me whether it is more fun and exciting to spot a real-life location I first saw in a movie or -- as happens much more frequently these days -- see a real-life location I already was familiar appear in a movie I'd have to honestly admit that I'm not quite sure what my answer would be to that question... except to say that both are pretty cool as far as I'm concerned! :b

Hi YTSL! What are those decorations in the top windows of the chapel? They really caught my eye. I also love the addition of the red lanterns. One more reason to visit Macau again. ;)

I still dream about the egg custard dessert at Fernando's.

I am just a lazy sod. I need to take a day and go back to Macau -- or just Fernando's -- again in December.

i love Macau...i fell in love with it on my first (and only so far) visit back in 2008. It has a smalltown/village-like feel which i enjoy greatly!

I love Macau. But found the ferry to/from HK a little pricey ;)

Can't be completely sure but they look like pierced hearts symbols/iconography.

Didn't have any dessert at Fernando's as I definitely had targetted Lord Stow's egg tarts for dessert. have you had those? If not... recommend that you make a beeline for them the next time you're in Macau! ;b

Alas, much of Macau no longer has that smalltown/village-like feel. (Yes, Macau, has changed a lot in recent years.) But Coloane still has it -- which is why I really enjoyed my visit there.

Maybe you could consider going straight to Macau from Malaysia via Air Asia. Or, alternatively, check out the outer islands (e.g., Cheung Chau or Lantau, particularly Mui Wo) of Hong Kong on your next visit?

Although "Fulltime Killer" made me interested in Macau, it was "Exiled" that prompted me to make it a priority to visit. Unfortunately we only had a 1/2 day. We saw some beautiful places, but not anything you mentioned in this entry--aha! now I know where to go when I return :)

Re "Exiled": the beginning section was shot near the Mandarin's House. Were you in that area of Macau?

But more generally, yeah, Macau sure has been made to look good -- or, at least, atmospheric and interesting in many Hong Kong movies... including quite a few directed by Johnnie To! ;b