And so it goes... my chronicling via photo-essays of hikes I've gone on in the unlikely hiking paradise that is Hong Kong -- with this installment being the second about the Kap Lung Forest Trail that is but one of many official trails to be found within the 5,370 hectares of Tai Lam Country Park out in the western portion of the New Territories.

What with it being true to its name in mainly passing through forest area, I'd recommend this 6 kilometer trail as a hike option for days when one would like to have some natural shade. But because it's a downhill trail that can be quite steep in parts, I'd also most definitely point out that this is one of those trails that shouldn't be attempted on days when the ground is wet and slippery. Which is why I made sure that even while the day that my hiking companion and I went on the forest trail wasn't all that sunny, it actually was one for which the weather forecast most definitely did not include rain... 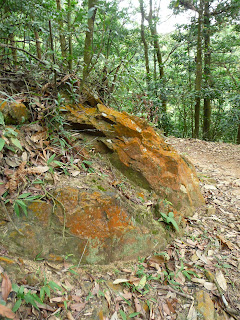 Is there iron in those rocks, I wonder?
(And if not, what makes them -- and
some of the soil about them -- so orange?) 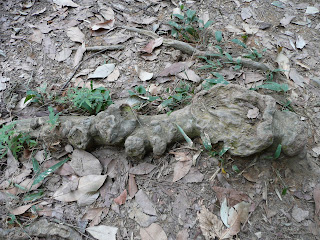 Further down along the trail, however,
things got quite a bit grayer 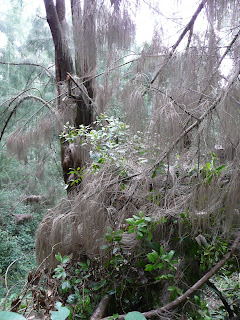 ...indeed, I'd even say that it felt eerily so 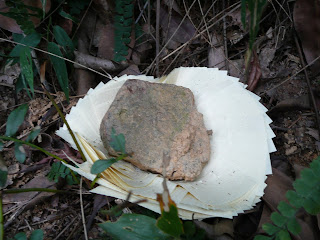 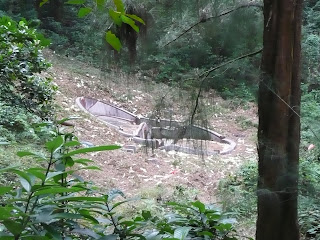 ...because it got us realizing that we were near someone's
grave (in this case, someone important enough to have
merited a final resting place so high up a hill) 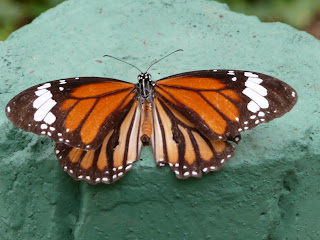 Before it all got too scary though, we found our paths
crossing such as this beautiful, living butterfly 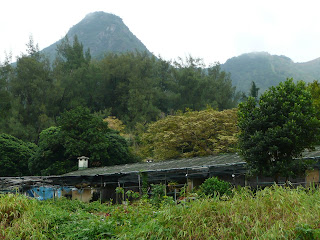 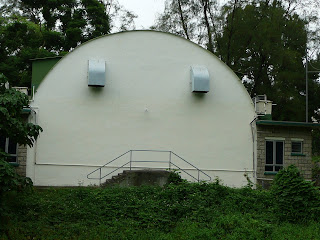 Signing off with a bit of whimsy --
yes, I know I'm anthromorphizing but
doesn't this military building look a tad unhappy? ;(
Posted by YTSL at 10:06 PM

That Quanset hut (or Nissen hut, based on the former colonial status of HK) does look sad. Perhaps worrying about his missing nose, replaced by a tiny hook.

I realize this must by one of the ultimate gwielo-type questions but who gets buried in a public park? Or if the grave came first, why would the park authorities situate the hiking trail so it runs next to a grave, unless the contours of the slope made it unavoidable.

One reason I find it odd is that in the USA the grave site would be vandalized and probably ripped apart.

Yep, Nissen hut would be the term for that sad looking building... ;b

Re your public park burial question: first off, my sense is that many of the burials pre-date the designation of the lands as country parks. And my sense also is that the people who get buried in those areas lived around there -- in the case of the grave I saw near Kap Lung Forest Trail, it's on the border of Tai Lam Country Park, near areas lived and farmed for generations.

As to why the park authorities would situate the hiking trail next to a grave: many hiking trails in Hong Kong follow traditional routes. (To wit: the nearby Kap Lung Ancient Trail.) And the authorities probably figure the locals know best in terms of land contouring, etc.

Re the comment on vandalism: cultural differences... in so many ways. For one thing, vandalism does appear to be a less regular activity/crime in Hong Kong than the US. For another, to vandalize graves seems a particularly low blow, given the respect and reverence in the culture in these parts for the dead as well as older generations.

Your photo-essays are always so enjoyable. I love seeing the 'other' side of Hong Kong.

My hiking photos often don't attract as many comments as I would like -- so I'm glad to get one from you saying that you enjoy them. Thanks! :)

Enjoyed your photos, thank you! We will be attempting this hike with 2 kids in tow tomorrow!
Polly

Thanks for checking out my blog post (and its photos). Hope you have an enjoyable hike along the Kap Lung Forest Trail! :)