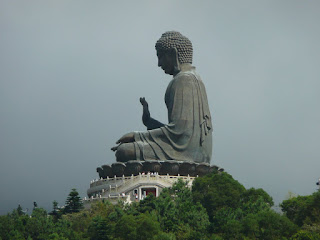 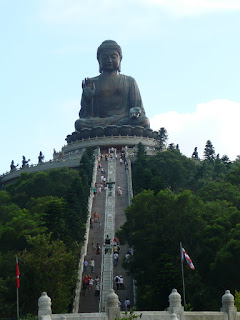 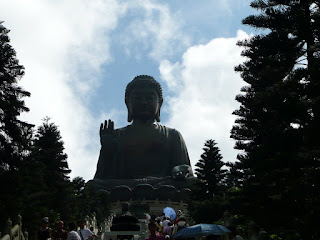 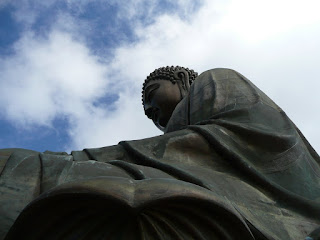 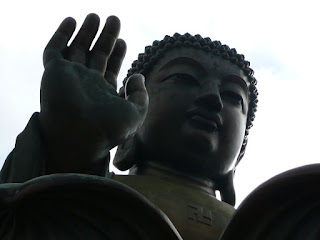 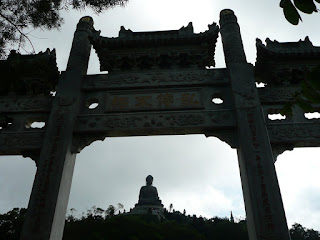 The Tian Tan Buddha -- popularly known as The Big Buddha -- up on Lantau Island's Ngong Ping plateau is one of Hong Kong's most iconic sights -- along with such as the view from Tsim Sha Tsui across Victoria Harbour to the northern section of Hong Kong Island -- and popular tourist attractions.

For the most part, most of these photos have since been just shut away in my computer memory. But I figure that this week's Photo Hunt would be a good opportunity and time to share six of those shots with others by putting them up on this blog. (This particularly since the photos I have with the number six or six distinct items in them just aren't as eye-catching as any of my six photos of a statue that I do find visually impressive on its own as well as because of its particular setting -- and thus reckon is worth more than one, two or even three looks! ;b).

Beautiful shots YTSL. I particularly like the third photo. It looks as if the Big Buddah is actually coming out of the clouds. Wonderful image.

I love seeing the impressive Buddha in 6 different photographs. They are all great.

You are right that I didn't find this theme very easy. I don't know if it's just me but so many of the recent ones have been hard for me except for bubbles last week. That one was easy for me but it's the only easy one I can remember in a while.

I always dream of visiting that place. Love that statue a lot as it has become one of the great landmark in Hong Kong. :)

cool take of lovely pics on the theme

re your comment on my post... sion fort had offered lot of photo-ops hence have plenty to participate in various memes :)

wow, that must have been quite a sight.

Funny, I posted something from Lantau too!!!

Good thinking YTSL! Fantastic shots and thanks for sharing them. It truly is a magnificent sight/site. lol.

great idea! now i've seen this imposing Buddha in other angles except for the usual view when i'm coming from the airport.:p

Wow that is amazing! A super selection of photos! Happy weekend

Beautiful photos and I couldn't resist taking pics of the big buddah either. I love them and have several much much smaller ones (the kind that can sit on a desk) here at home. :) Happy photo hunting!

Beautiful shots! I'll bet it feels overpowering being there up close and personal!

Thanks, glad you like the shots -- especially the third one from the top. :)

Yeah, the Photo Hunt themes do appear to have become more challenging. Sometimes I feel like not playing that particular Saturday but when I (finally) do eventually find something for it, I do tend to feel quite satisfied!

You're nearer Hong Kong than a lot of the other Photo Hunters. So... ;b

Thanks -- for commenting re my photos and also responding to my query on your blog. :)

Yep, you did! And I have a photo of the Lantau Devas somewhere on this blog too! :)

Often feel the same when I visit yours and quite a few others' blogs! :)

Glad you enjoy what I shared. :)

Wow... so you weren't content only to take photos of the Big Buddha, it sounds like! :D

I wouldn't go so far as to say overpowering but one does feel glad to be able to be there to see the sight up close as well as "live". :)

Thanks so much for sharing these six cool photos of that amazing statue. I'd love to see that one in person. Happy weekend!

Beautiful photographs!!! And I loved the idea of posting "6" photos to meet the theme!!

Absolutely stunning! And I wish I'd had the same idea. :)

Beautiful shots. How many step do you think this place got. I bet it's fun to go up and see what you can see above. Great shot! Happy Sunday!

A very impressive set of photos, thank you for sharing them with us :-)

Beautiful shots! I love the 2nd one. You can see how enormous it really is. Thanks for sharing them! Enjoy your weekend :-)

Amazing! Wish I could see it in person.

the Big Buddha is truly magical and impressive. looking at your pics sure brings back fond memories of my trip to HK. Happy weekend.

Hope you get your wish to visit Hong Kong and the Big Buddha someday (soon). :)

Re the idea: it was the easy way to deal with this week's theme... and fortunately, I found a subject I thought worthy of viewing from at least six different angles! :)

Your own idea was amazing! Seems like you put a lot of thought and effort into your Photo Hunt entry this week. :)

One of the pages I linked to said 268 steps. (And FYI, I am a great believer in linking to pertinent pages! ;b)

And thank you for looking and appreciating. :)

Glad you like the shots, especially the 2nd one from the top. :)

Hope you get your wish some day!

Glad I could help trigger fond memories of your visit to Hong Kong. :)

Great shots! What a coincidnece that I've decided to post the same statue too :)

However it was very misty the last time I was there, a total contrast from yours!

Have to admit that I was inspired by your photo to consider the Big Buddha as the subject for a post featuring six photos of the same thing! ;b