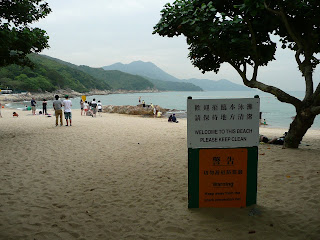 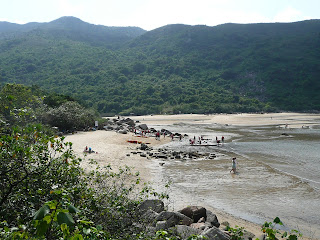 Beaches and surroundings at Hoi Hai Wan
in the northern Sai Kung peninsula
For the second Sunday in a row, I didn't go hiking. Last week, it was because I had a "date" with an over 9 hour classic of cinema. This time around, my "excuse" was that I had a friend's wedding to go to in the afternoon. (The second time that I've been invited to such a festive occasion in Hong Kong!)

But if truth be told, I would have thought twice about going out on a hike today even I hadn't had that wedding invite -- because this weekend, with the temperature rising over 33 degrees Celsius in some places, was the hottest thus far in 2010. Indeed, so hot was it today and yesterday that I got to thinking that a leisurely day out at a beach might just be the ticket next weekend if the high temperature (and humidity -- but minus actual precipitation) continues.

Now to figuring out which beach would be a good one to head out to because I'm actually spoiled for choice out here in the Big Lychee as there are quite a number of beaches that the general public have access to. And to think I've only been to a smattering of them thus far... and quite a few times only because they were along trails I hiked, actually!

It's weird to sit here in suburban Maryland, dreading going back to work tomorrow morning, and look at that picture of the beach and know that very tree in the photo.

But thanks for reminding me of some good days in Hong Kong.

Sure, I need to see more of the Asian world but, for now, for at least one more visit, it's Hong Kong for me!

I have to admit the heat and humidity are getting to me these last couple of days. That beach looks great, I am not much of a beach person, but I am all for heading for some place cooler. Thanks for the tip.

Yikes -- that doesn't sound good! And yeah, it sounds like you need another vacation soon -- but however much I love Hong Kong, I seriously encourage you to expand your horizons and go elsewhere. And I have this sneaky feeling you actually would love Singapore! ;D

Summer has arrived with a vengeance, it seems. Also, note that it's supposed to get rainy later in the week so if you can go to a beach in the next few days, definitely would suggest that you do so!

Yeah, I do but I don't think Christmas is the time to explore a totally new place -- rather just enjoy the charms of HK one more time. Next spring maybe I should hit Thailand or Indonesia or Vietnam (all on my list for years).

It's so funny that you want to spend Christmas in Hong Kong because that's when many people (including myself) go away! And interesting that you've had those Southeast Asian countries on your list for years. Maybe it's a case of "the grass is greener on the other side of the fence" but there are so many other countries I've wanted to go to -- and have visited -- than those! :D

With climate change proceeding apace we will all be at the beach soon, even those like Diane and myself who aren't beach people.

YTSL, that is a great link leading to "Hong Kong Beaches". They aren't afraid to discuss which beaches are "grotty" (which is quite a term for a beach--ick) as well as where to find the nice ones.

Re this climate change thang: it seems that even while the summers are getting hotter, the winters are also getting colder. Interesting... and rather scary, actually... :S

And I'm glad that you check out the links I put in my blog entries. :)