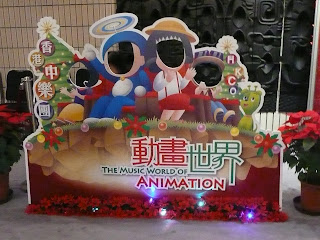 Proof positive that classical music concerts
in Hong Kong are often much more family friendly
than their equivalents in the West... ;b
What kind of music do you expect a musical ensemble called the Hong Kong Chinese Orchestra to play? If you're anything like me, the answer would be something akin to the music that I'm currently listening to: i.e., the original soundtrack CD of Tsui Hark's The Lovers, a sublime cinematic imagining of an old Chinese romantic legend that could be described as Romeo and Juliet with a cross-dressing twist. (More than incidentally, The Butterfly Lovers' Violin Concerto pre-dates Tsui's 1994 film and really is a thing of beauty in its own right.)

But in keeping with it being more innovative than its name might suggest (and its concerts being attendantly more fun than many are wont to expect), this weekend, the HKCO elected to enter The Music World of Animation and play songs like those from -- no, I truly I kid you not! -- The Pink Panther and Hayao Miyazaki's Howl's Moving Castle; the former with audience participation included in the bargain (in terms of the audience being asked to snap their fingers at particular times indicated by conductor Chew Hee Chiat)!

Although I wish it were otherwise, no music from My Neighbor Totoro or Ponyo on the Cliff by the Sea was included in the programme. But as consolation, the orchestra did also play music from another Hayao Miyazaki classic, Laputa: The Castle in the Sky, as well the -- to my mind -- cinematic as well as musically lesser Howl's Moving Castle.

Interestingly, and the playing of such as The Pink Panther theme and a Disney Fantasies medley notwithstanding, the programme was very strongly slanted towards Japanese anime -- TV series as well as feature films. As a further example, my favorite piece of the concert was the theme from Chibi Maruko-chan. Still, to judge from the audience reaction, the overwhelming favorite of most of the concert-goers was the Doraemon theme that many of the audience actually sang along to as well reserved the loudest applause of the evening for! ;b
Posted by YTSL at 9:52 PM

f you don't celebrate, please take think of this as my general best wishes to you. I will be back online in 2010.

I don't celebrate Christmas per se -- but do think of it as a time of holidays and, in fact, am on vacation right now. So happy holidays to you in return and see you in 2010. :)