Continuing from the previous hiking photo-essay: Rather than follow the Hok Tau Country Trail's circuit to its conclusion, on reaching Hok Tau Road for the second time, my two hiking companions and I turned east- rather than west-wards towards Hok Tau Reservoir along the hiking trail that bears its name. That decision was part intentional.

Later on, however, we effectively went "off trail" accidentally. More specifically, our plan to follow the Hok Tau Reservoir trail to its conclusion got derailed about two-thirds along the way through our not being able to find any of the mapped -- but seemingly over-grown -- trails that would take us westwards and back to our starting point.

Although this state was initially a bit stress-inducing, our "in the field' decision to alternatively follow at least one fairly well-trodden path due south ultimately paid dividends. For not only did we end up near a place before dark where we rather fortuitously found an available taxi to take us to the nearest MTR station but we also ended up going to Sha Lo Tung, a close to completely abandoned village in an area almost completely bordered by Pat Sin Leng Country Park that has been latterly designated a Site of Special Scientific Interest because of its rich biodiversity and historical value.

Indeed, once back to civilisation and over dinner, we decided that it actually had been a pretty good hike all in all; one that was interesting to walk and also yielded quite a number of interesting sights -- some of which I can share with you courtesy of the following photos:- 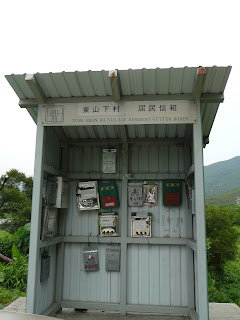 Not only is Hong Kong a land without postcodes but
it seems that this is as far as the postman will go
as far as the northern New Territories village
of Tung Shan Ha is concerned! :O 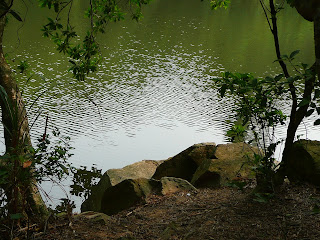 A bank and the calm waters of Hok Tau Reservoir 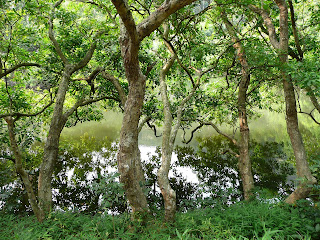 If truth be told, I consider Hok Tau Reservoir
to be the least scenic of the reservoirs
I've been to thus far in Hong Kong... 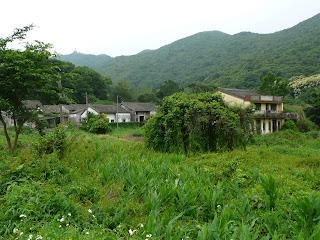 In contrast, I think Sha Lo Tung actually is one of
the more photogenic of Hong Kong's abandoned villages 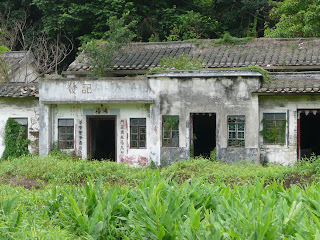 Once -- maybe not that long ago, in fact --
these buildings housed shops and people 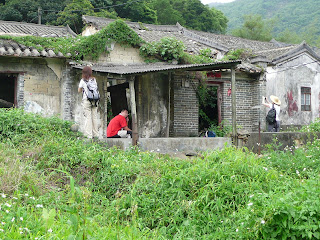 These days, though, fellow hikers (like my
camera-toting hike companions) are the people
one is most likely to encounter in the vicinity 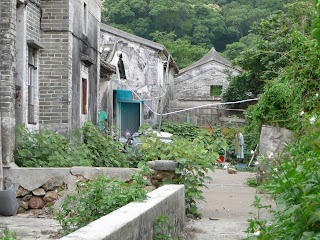 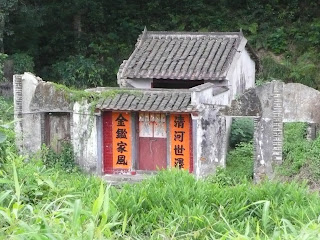 And perhaps it's not overly romantic to think that
that the reason whoever has chosen to remain
living in this thus not completely forsaken place
is to take care of the village -- and ancestral? -- temple...

I'd imagine they're continuing to live there in expectation of a bigger handout when the developers (golf course complex has been the front runner - not sure now) finally get their mitts on the place.

Oh my... I had thought an "old ruin" would have nicer thoughts re those who choose to live in near ruins! ;(

the ruins as u put it must b worth a lot of money bcoz of the land factor?

Yes, land to build on is a precious commodity in Hong Kong. But Sha Lo Tung is quite aways from much of civilisation that I personally like to visit but would never think of living there! (And I work in the closest town/city to it!!!)

YTSL, your photos of the wild outskirts of Hong Kong never cease to surprise me. I hope these places remain undeveloped and left to the hikers and the hermits.

Am glad I'm still able to surprise you. I remember when you were here and laughed when I told you that I try to avoid crowded places... Every time I'm in a place like Sha Lo Tung, I get to recalling your incredulous laugh... ;b

Wow, more abandoned villages which I really enjoy looking at.

Even though you think the Hok Tau Reservoir is the least scenic of reservoirs your photos of it are interesting.

Thanks for the links which I checked out. Both are of interest to me.

You're welcome. And I hope that the one about Sai Kung will further tempt you to visit Hong Kong once more before too long. :)

Woah Kralnetci -- aren't you Turkish? If so, it's really amazing that this far away place is something (close to what) you imagined as a child! :)