There are certain cities and towns in Japan, notably Kyoto and Nara but also such as Onomichi and Tomonoura, where visits to Buddhist temples and/or Shinto shrines feel like a must do for even the non-religiously inclined.  Although I wouldn't consider Fukuoka to be one of them, it happens to be the case that I've spent time at the most important shrine in Kyushu's largest city -- and on more than one occasion too!

It may not be the biggest Shinto shrine I've been to but Kushida Jinja is one of those places where it feels like there are a lot of interesting things to see.  On my first visit some twelve years ago, I found the colorful as well as very large portable wooden floats carried around during the Hakata Gion Yamakasa Matsuri which the shrine plays host to every July -- a couple of which are on display at Kushida Jinja -- to be particularly awesome.  But while they continued to fascinate me on my second visit, I found a number of other colorful sights catching my eye too... 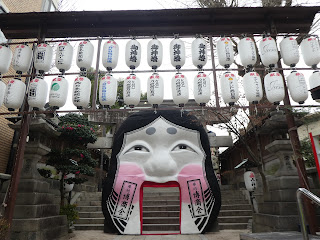 This otabuku mask installed at one of the shrine's entrances ahead
of Setsubun is what got me to visit Kushida Jinja once more! 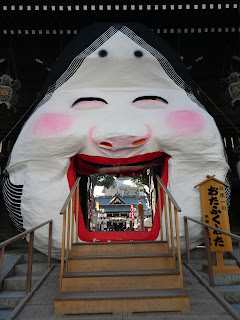 An even bigger otabuku mask at the shrine's main entrance
that, at 5.3 meters high and 5 meters wide, is Japan's largest! :O 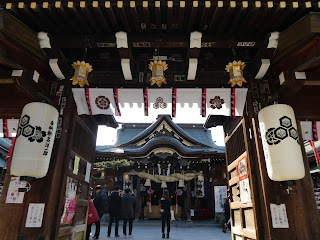 Pass through the giant mask erected for Setsubun to
get good luck and, also, to enter into the shrine grounds 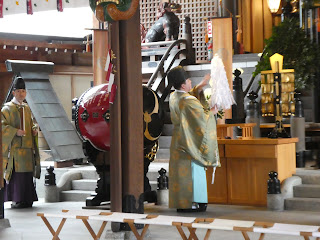 As luck would have it, I witnessed a priest performing what
looked to be a ritual blessing on my visit to the shrine 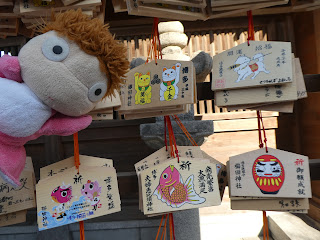 Puppet Ponyo poses with ema that have different depictions on them :) 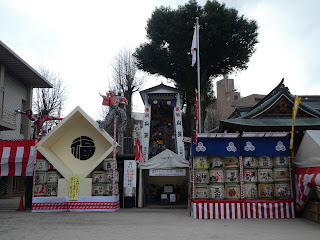 Barrels of donated sake and other shrine accoutrements, including a
Hakata Gion Yamakasa Matsuri float, on display for all to see 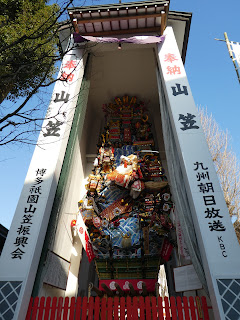 I think it'd be remiss of me to not include a close-up photo of
one of the festival floats installed in the grounds of the shrine... ;b 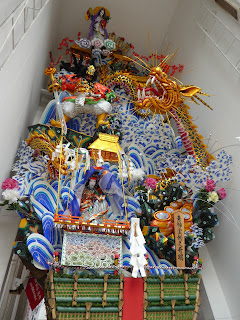 The decorations on the float are as beautifully
elaborate as the float itself is big!
Posted by YTSL at 11:52 PM