Machiya and museum in Hakata, Fukuoka 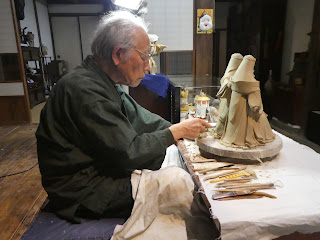 A Fukuoka craftsman fashioning figures out of wood 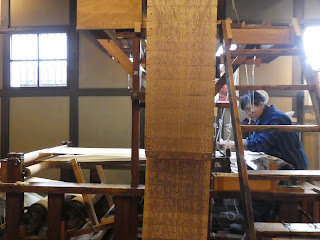 A craftswoman at work on a Hakata Weaving machine
The first time I ventured into a machiya was in Kyoto a few years ago.  Having seen many of these traditional wooden townhouses when moving around in the city (be it by bus or on foot), I was happy to discover that a restaurant serving up delicious kushiyaki could be found in one of them and consequently was open to the public if they went and had a meal there.
In the years since, I've come across machiya in a number of other Japanese cities and towns.  While many remain private residences, others of these buildings -- which, be they in Kyoto, Nara or Fukuoka, follow a long and narrow design that made them far more spacious than they look from the front -- have been converted into museums that give one a fairly good idea of how they were traditionally furnished back when they were occupied by merchant families, many of whom customarily set aside areas in the houses to store and sell some of their goods as well as keep other rooms as their living quarters.
In Fukuoka, specifically the section of the city built by merchants, there's the Hakata Machiya Folk Museum, part of which is housed in a machiya but actually encompasses three buildings.  More ambitious in scope than, say, the Ohashi House in Kurashiki or Nara's Nigiwai-no-Ie and Koshi-no-ie, it has exhibits on Hakata's history and area festivals (including an informative video on the Hakata Gion Yamakasa Matsuri hosted by the Kushida Jinja located just a stone's throw away from the museum) as well as the traditional merchants townhouses themselves.
In addition, one can observe traditional craftspeople at work inside the Hakata Machiya Folk Museum.  The afternoon that I visited, an elderly man was fashioning a group of figures out of wood on an upper floor of the main museum building while a younger artisan was operating a weaving machine that was producing Hakata-ori (thick, tightly woven silk cloth specific to this part of Japan) in one of the rooms in the restored machiya section of the museum.
I must admit to generally having mixed feelings with regards to seeing people effectively put on display in a museum.  But my discomfort at encountering this at this Fukouka museum was eased quite a bit by both of the craftspeople taking it upon themselves to engage me in conversation when I approached their area.
Incidentally, our conversation utilized a mix of English and Japanese.  And while there is no way I can claim to be fluent in Japanese, I must say that I'm actually amazed how many Japanese words and phrases I've managed to pick up over the years -- though it probably won't come as a surprise to those who know me that a good bulk of the Japanese vocabulary I possess pertains to food and drink! ;b
Posted by YTSL at 11:59 PM