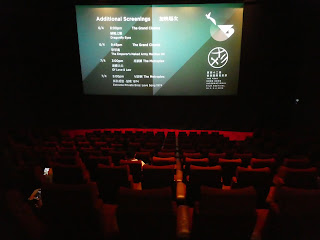 Most, if not all, movies benefit from being viewed on a big screen


Into the Inferno (UK-Germany-Canada, 2016)
- Part of the HKIFF's Galas program
- Werner Herzog (who also scripted) and Clive Oppenheimer, co-directors


It may have been made for Netflix, whose customers stream the movies they watch onto computer and smartphone screens or watch them on TV screens courtesy of DVDs, but Into the Inferno really is one of those documentaries that really is best viewed on a big theater screen.  An ambitious, sprawling work which transports its audience to far flung places with landscapes that can look incredibly unearthly, it also has truly incredible footage that not only shows the power of volcanoes but also how mesmerizingly as well as frighteningly beautiful lava can look when it churns about, erupts and/or flows out to envelope whole landscapes.


Peter Zeitlinger's cinematographer makes sure that Into the Inferno is no run of the mill documentary but what really makes certain of this is the distinctive imprint that director Werner Herzog (who also scripted this effort) leaves on it.  And while the German auteur may have given Professor Clive Oppenheimer a co-directing credit and had the Cambridge University volcanologist be the main man in front of the camera, the fact that this work takes pains to explore the spiritual side of volcanoes rather than just their scientific aspects is something that comes from Herzog steering the production towards subject matter that truly interests him.


Over the course of the film, Herzog and Oppenheimer -- who met in Antarctica, when Herzog was filming his Encounters at the End of the World (2007) -- journey to the Vanuatu archipelago in the South Pacific, Indonesia (the country with the most volcanoes in the world), Iceland, Ethiopia and North Korea (home to an active volcano that all Koreans consider sacred).  In addition to getting up close with some really spectacular volcanoes and related physical features (such as caldera lakes), they also interact with a diverse group of individuals, including members of a cargo cult, outwardly super-patriotic North Koreans (who often act like they too belong to a cult), and paleoanthropologist Tim White and his dedicated crew as well as volcanologists from various countries.


In the hands of lesser (or plain different) filmmakers, the different sections of Into the Inferno wouldn't feel like they could all fit into a single work.  However, Herzog successfully weaves them into a pretty fascinating exploration of the passionate -- often to the point of obsessiveness -- human quest for meaning, all of which involve volcanoes in one way or another.


One of the sights that invariably strikes visitors to the African continent is of people -- men, women and children -- forced to walk far distances because they don't have money for public transportation, let alone a car or even motorcycle of their own.  Adding to the misery is that many of these people are effectively their own beasts of burden, carrying all manner of things on their heads as well as in their arms and on their backs.

Even when the subject of Makala (charcoal in Kiswahili, the native language of its protagonist), a Congolese charcoal maker and seller by the name of Kabwita Kasongo, has use of a bicycle, it's to load with many heavy bags of charcoal and then push into town rather than actually ride.  Observing the massive effort this takes, one can't help but feel for him.  Knowing that considerable effort also is required beforehand to do such as cut down the trees whose wood then gets turned into charcoal gets one concluding that his is a life that so many of us would not be able to lead and endure for long at all.


While much of this affecting film is taken up documenting mundane activities, there are elements in it which can disturb despite being depicted in a matter of fact way rather than sensationalist manner.  One example is rat being part of the diet of the protagonist and his family.  Actually more upsetting though is how it can seem that the closer he gets to town (and supposed "civilization"), the more unpleasant Kabwita's encounters with his fellow humans get.  In addition, there are scenes in this documentary that get me questioning why he has so much faith in God when there seems to be so much inequality and suffering in this world.


Rather than look upon him merely as an unlucky wretch condemned to a Sisyphean existence, however, I came away from my viewing of Emmanuel Gras' documentary thinking that Kabwita Kasongo is one of those heroic as well as admirable individuals who, somehow, against the odds, manages to not only eke out an honest living but also provide for his wife Lydie and their children, and continue to dream of, and plan for, a better future for them all.  And it is my sincere hope that he's been amply rewarded for agreeing to appear -- nay, star -- in this work which has gone on to garner a number of accolades, including the Critics' Week Grand Prize at last year's Cannes Film Festival.