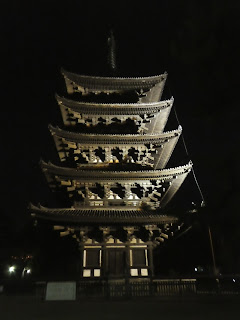 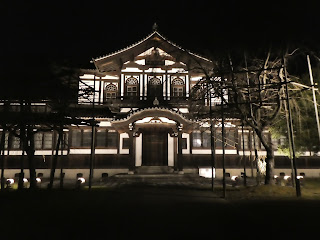 A lesser building in Nara Park that I walked by on my way
to see a mountain being set on fire!


Until my Japan trip this past January, I had never spent the night in Nara -- although I've visited the city twice before (including with my mother last October).  It's not like that's not a lot to see there, what with there being a number of historical monuments there that are UNESCO World Heritage-listed scattered across seven sites in what was one of Japan's ancient capitals.  But what with it being less than an hour train's journey away from both Kyoto and Osaka, Nara is usually visited on a day trip from some place else.


Since I was attending an evening event this time around in the city, however, I decided to stay the night.  And because I was doing so, I didn't have a train to catch that night and thus felt more able to linger at places that caught my eye on the way back from witnessing the ritual burning of Mount Wakakusa (and the fireworks display that preceded the setting afire of the mountain).


If anything, my main reasons for ending my viewing of the pretty unique spectacle of a mountain ritually set aflame were that: firstly, I was feeling pretty cold; and secondly, I was getting rather hungry.  And it seemed that much of the crowd were of the same bent because, as I followed those who had decided to take their leave earlier than me away from Mount Wakakusa, I found that I was being led to what turned out to be a row of yatai (food stalls) temporarily set up on the sides of the path leading to Todaiji's Daibutsuden!

Although I was tempted by some of the food on offer (including the outdoor festival favorite that is yakisoba), I decided to hang on for less carb heavy food in an indoor dining establishment closer to my hotel.  I also realized that I wasn't really ravenous as I found myself being distracted every so often by the sight of a building made all the more beautiful by it being lit up -- or having spotlights illuminating it, as was the case with Kofukuji's five-storey pagoda.

I have to admit it: on my previous visits to Nara, I hadn't given that particular structure much of a glance.  In part, it's because I was so intent on getting to Todaiji, including the last time around.  It's probably also because I've seen a number of other pagodas on my various Japan trips (including while biking on the Kibi Plain, at Horyuji, and in Yokohama, Kyoto, Miyajima and Onomichi).  But in the dark, I finally was compelled to take a good, admiring look at what's, in fact, the second tallest pagoda in the country, with a total height of 50.1 meters! :)
Posted by YTSL at 10:54 PM