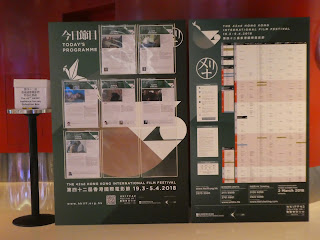 Coverage of the 42nd HKIFF continues on this blog! :)


A (male) friend visiting Hong Kong for film related reasons told me of a mutual friend of ours (also male) who's been getting into viewing a lot of films lately that are directed by and/or starring women.  If so, I told him, I'm surprised I didn't spot that mutual friend at the screening of The Judge that I attended.


Directed and produced by a woman (Erika Cohn), this intriguing documentary also boasts a female principal cinematographer (Amber Fares), mainly female executive producers and a number of female crew members along with having a very interesting female subject in Judge Kholoud Fakir, one of three female Shari'a court judges in Palestine.


The admirable Kholoud Fakir was just 34 years of age when she and Asmahan Wuheidi made history by becoming the first female judges to operate in Palestine's Islamic law courts in 2009.  For many people, female as well as male, this development had been nigh on unthinkable.  For her, it was only logical and sensible that there are women as well as men assigned to administer justice in courts that largely deals with domestic and family matters.


The intellectual prowess and mental strength of this judge (who also is a married mother of four children, two girls and two boys) is evident throughout the film.  And as The Judge also goes on to show, this is much needed since Kholoud Fakir has to face (down) more professional along with socio-cultural obstacles than her male colleagues.

At no point does this captivating documentary try to hide that Palestine's is an imperfect, and arguably overly-politicized, society, with life often being tougher and less fair for females than males.  At the same time, however, it's noticeable how supportive Kholoud Fakir's husband (a lawyer who met her at work) is and also her proud father -- who talks on camera about how he actually thought that it was more important for his daughters to get a good education than his sons because, it was education that would be key to their being able to provide and fend for themselves.

There's no two ways about it: I adore Brigitte Lin Ching Hsia!  Even so, I wasn't willing to watch her two nights in a row in two Taiwanese weepies (as it would have been the case if I had viewed Outside the Window the evening I attended this screening of Cloud of Romance), since my past experiences of them involve my getting so frustrated that I've actually thrown cushions at the (TV) screen on more than one occasion!

Chiung Yao may have been a super popular romantic novelist, particularly in the 1960s and 1970s, but I think it's fair to say that her stories, and those super melodramatic movie adaptations of them, really have not aged very well.  It's not just that they're full of people who are so affected by love that it really can come across as a terrible malady capable of driving people mad.  Rather, it's also that the obstacles to romantic happiness can come, as was the case in Cloud of Romance, with such as the sort of mothers one wouldn't want to wish on their biological children and, more so, those who hook up with their precious offspring.


In view of how hyper melodramatic some of the scenes in this movie -- which revolves around a love triangle involving a spirited young woman (who thinks of herself as being like a floating cloud), a young man (who says if she's a cloud, then he's like the wind!) and a second, more down to earth fellow -- can be, I actually came away from my viewing of the offering with a greater admiration and respect for the ability of Brigitte Lin and her co-stars, principally Charlie Chin and Chin Han but also the actress who played Charlie Chin's character's demon of a mother, since they appeared eminently able to not only be able put their heart and soul into portraying the characters they do in Cloud of Romance but, also, keep a straight face as per the demands of the film!

I have to admit: for the first 15 minutes or so of the screening, I held a handkerchief to my mouth to choke back the sounds of hysterical laughter that I was afraid would upset some of my fellow viewers.  So it was quite the relief to realize after a while that many other people were similarly unable to stop laughing at certain moments and lines in this often excruciatingly melodramatic movie that proved to be inadvertently hilarious!


Here's the thing though: amidst all this ridiculousness, I actually found myself shedding tears at two different points during my viewing of Cloud of Romance.  For despite her playing the sort of character I normally would not feel much sympathy for, not least because she needlessly got herself into situations that create tons of hurt for more than just herself, I still ended up caring for Brigite Lin's character in this movie because, well, she was being played by an actress whose charisma and plain greatness is evident even in a work that's far from the cinematic platform she really deserved.