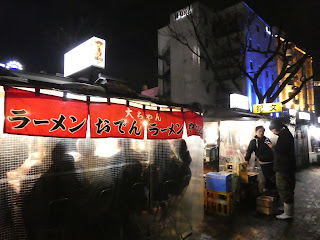 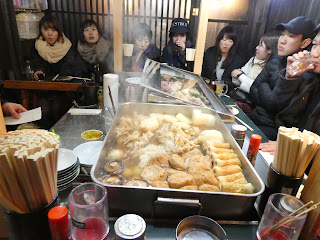 Scene inside a Fukuoka yatai

More than a decade ago now, my mother and I went on vacation to Taipei.  Among the attractions we were most looking forward to checking out was at least one of its famous night markets.  But our visit to the one at Shilin turned out to be on the underwhelming side.


Upon wondering why it was so hyped, my mother was moved to suggest that those visitors who make such a big deal of it do so because they have never been to Penang, where there are lots of places to eat street food -- and a great variety of food to eat -- at night.  The more I think about it, the more I think she may have been right.  And I got to thinking again that growing up in Penang has spoilt me as far as this kind of thing is concerned when I went and checked out the similarly famous yatai scene one evening in Fukuoka and found the experience rather disappointing.


It may not have helped that the night I went out to get a meal at a yatai was a Sunday; the one day of the week that many -- though by no means all -- of them are closed.  So there may have been less variety as well as fewer options numerical available.  In any event, I figured that I might as well as go for it and selected a food stall that looked popular, yet didn't have too long a line of people waiting to get a seat at it, which turned out to have oden (fish cake stew), yakitori (chicken skewers), ramen and gyoza (Japanese pan-fried dumplings) on its menu (which was written in Japanese and Korean but not English!).


To be fair, the bowl of oden that I had was pretty tasty.  And I liked that it had a good assortment of items; with mushroom, offal and shirataki in the mix along with the "classic" daikon and boiled egg.  But the gyoza that I followed that comforting winter dish with was disappointing -- in that I didn't only think that it was over-cooked but also wasn't handmade.


Worst of all was how expensive it all (together with the one bottle of beer that I also ordered) proved to be.  Given the spartan conditions of the yatai as well as the by no means high quality of the food and drink on offer, I most definitely wasn't expecting it to be more expensive than a meal of equivalent size in an izakaya with more room, comfortable chairs (as opposed to rickety stools) and indoor heating!

While I wouldn't go so far as to say that I think I had been ripped off, my Fukuoka yatai experience didn't feel as much of a bargain as well as pleasant as I had hoped that it would be.  Feeling unsatisfied and unwilling to return to my hotel just yet, I went and found a dining establishment nearby where I could eat in heated, indoor comfort -- and which turned out to have better food and drink as well.  Put another way: the Fukuoka yatai experience seems over-rated and since it's so easy to eat (and drink) better elsewhere in the city, I think that's what I do from now on whenever I'm there!
Posted by YTSL at 11:58 PM

Trying to think if I every had a awful meal with street food.

In this particular case, I wouldn't go so far as to say that the entire meal was awful, "just" disappointingly over-priced. And the thing with Japan is that there are so many other, better food options around!

Good analogy of Shilin Night Market! When a night market becomes a tourist attraction rather than an informal place for the neighbours to get a cheap meal, it always declines in terms of price-quality ratio. I'm guessing your hometown stalls in Penang are more oriented towards discerning locals who can easily make a stall go broke if they don't keep up the quality.

I take it that you've been to Shilin Night Market and were similarly disappointed? The thing with Penang is that, a lot of the street food places -- be they open at night or during the day -- are multi-cultural and have a lot more variety than mono-cultural places as a result. Also, you're right, many of them remain oriented towards discerning locals (who the stall owners know will be returning again and again if they're good) rather than tourists (who are usually there just once and then never again).

Shilin was among the many different night markets and food courts I recently visited on a round-island trip of Taiwan, and the quality of food was often inversely proportional to the percentage of tourists among the market goers, which is hardly surprising I guess. I wonder how much of the Yatai's clientele are repeating regulars, versus tourists and business travelers from outside Fukuoka.

I got the feeling in Fukuoka that the yatai have become more tourist attractions than bona fide local haunts. Also, when watching the yatai cooks at work, I got the sense that they don't have that pride in producing a good experience and meal that so many chefs at various sushi-ya, yakitori-ya and such that I've visited over the years do. So sad/disappointing!

Taipei has so many night markets that Shilin simply isn't relevant any more. I found the smaller ones much more interesting in the end.

Sounds like big is not necessarily better as far as Taipei night markets are concerned!