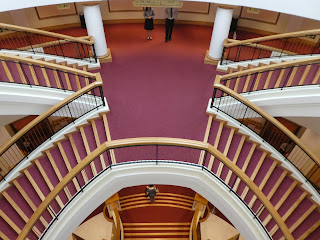 
A friend of mine recently complained about how many of the films I review on this blog are very hard to get access to over where she lives (in small town USA).  But she should have no problems being able to view Heat, the 1995 Hollywood crime drama that's probably raked in the most money at the box office of any of the Hong Kong International Film Festival offerings I'm viewing this year (and may well have had the largest budget too).


Al Pacino and Robert de Niro head a strong cast featuring many familiar faces and names (including Jon Voight, a teenaged Natalie Portman and a young Dennis Haysbert, who I now forever associate with 24's President David Palmer).  The former plays a Lieutanant Vincent Hanna, an LAPD detective leading the pursuit of a gang of skilled robbers headed by the latter's Neil McCauley, an ex-con who these days favors suits and the kind of confident demeanor and swagger that one associates with successful businessmen.


The cinematic remake of a failed TV pilot that Michael Mann had worked on, Heat clocks in at close to three hours long and features three sub-plots that look to flesh out the characters played by Pacino, de Niro and Val Kilmer by way of their relations to the key females in their lives.  While they do add dimensions to those characters, I still felt like the scenes in which they are shown interacting with the women in their lives are by far the weakest of the film.  For one thing, none of the female characters in this offering come across as anything but disappointingly one-dimensional.  For another, the best chemistry displayed between any two people in the movie occur in the too few scenes that have Pacino's Lt. Hanna and de Niro's Neil McCauley interacting with each other.


Where Heat really gets the adrenaline going and temperatures rising is in its detailed action scenes, which reputedly have inspired real life copycat crimes as well as the designers of one of the Grand Theft Auto video games.  Also elevating the film beyond that of an average actioner are the characterizations of McCauley and his team, notably explosives expert Chris (Val Kilmer), in such a way that you get to realizing that they may be hardened criminals who won't hesitate to kill on the job but nonetheless are men who want to do good for those they love, and the depiction of its nominal hero, Lt. Hanna, in such a way that it seems inevitable that the more intent he is to nail the bad guys, the more he'll neglect the females in the life and suffering he'll bring on them as well as himself.
My rating for the film: 8.0


At the Hong Kong International Film Festival three years ago, I viewed my first animated Irish film.  The Song of the Sea is the kind of the movie one would feel comfortable to bring children to go see.  But while The Breadwinner comes from the same Irish production house, Cartoon Saloon, as that magical movie which introduced me to selkies, I must admit to being rather startled to catch sight of young tykes in the audience of the HKIFF screening that I was at yesterday afternoon.


We're talking after all of a film that, even while it is indeed animated rather than 'live action', is set in Taliban-ruled Afghanistan, where women are liable to get beaten up if they venture out of their homes unaccompanied by men and a booklover who was a teacher in peace-time can end up not only missing a leg after being taking part in the war but also confined to a prison far away from home.


After her father is unjustly convicted, and with her mother (voiced by Laara Sadiq) and adult sister not allowed to leave their house without a man at their side, preadolescent Parvana (voiced by Saara Choudry) cuts her long hair short and dresses up as a boy to go out and do such as buy food for the household and become the family's breadwinner.  Her days are enlivened by her encountering and deciding to work in tandem with a former schoolmate who has similarly disguised herself as a boy (Soma Bhatia) and she helps banish away fears and nightmares before her baby brother goes to bed by telling him the fantastical story of a brave boy who goes off to confront a scary Elephant King.


But for every little triumph, and joy at discovering the many things she can do and places she can go when people think she's a boy, Parvana also experiences the kind of disappointments and setbacks that people shouldn't have to deal with at least until they grow into adulthood.  Put another way: there's no disguising that The Breadwinner tells a heart-breakingly sad tale, whose many injustices one will find oneself thinking of far more than any of the developments that we're supposed to be (temporarily) happy about; and this not least because it's so very easy after viewing this offering to imagine that there are so many real life equivalents of Parvana and her family out there in our troubled world.