A Kennedy Town hillside backstreet with a secret association ;) 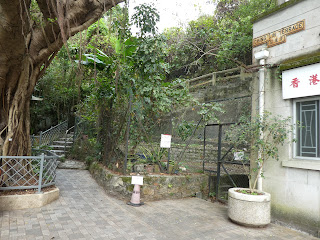 A part of Hong Kong related to a famous secret... ;) 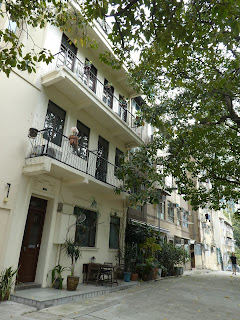 Buildings on this Kennedy Town terrace look so much
nicer than the ones that figured in Ann Hui's The Secret! 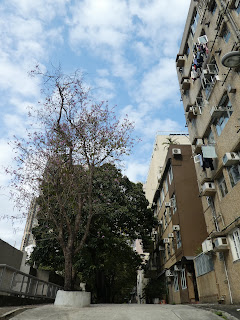 Not the most obvious place to be a movie location, right? :)
A friend and I were talking some time back about a self-professed fellow Hong Kong movie fan who, soon after moving to the Big Lychee, felt the magic die.  One noticeable way which we could see it happen was his no longer getting all that excited about spotting a Hong Kong movie location while moving about the city -- whereas for my friend and I, it still can feel really neat to come across a place we recognize from it having been featured in a movie (or, actually more usually these days, seeing a place we know appearing as a setting in a film scene).
Conversely, one of the saddest things about living in Hong Kong for me is how many classic Hong Kong movie locations no longer exist -- and disappeared long before I had a chance to visit them.  I think here of such as the tea house in Hard Boiled and the California bar-nightclub that featured in both Chungking Express and Royal Warriors.  And I'm so grateful that I did manage to check out (and even eat food from) the Midnight Express eatery that so prominently figured as a location in Chungking Express before it, too, became no more.
Then there are the locations that I wish I could identify but haven't yet been able to do so because they can appear rather generic -- or have changed so much over the years.  And while there's indeed a part of me that wishes that more locales could look pretty much unchanged from how they appeared in the film, it also can be nice to see them actually looking physically improved from previously -- rather than desolate, like the Cheung Chau cinema which figured so prominently in Just One Look.
Such is the case with a Kennedy Town hillside backstreet that looked to be full of shabby tenements in The Secret, Ann Hui's Hong Kong New Wave classic film which was originally released in cinemas in 1979 (and has recently been restored and was screened a few months ago at the Hong Kong Cultural Centre), but now appears like it'd be a pretty nice street to live on.  Not only that but, upon further investigation, I got to realizing that that very street actually also is home to the very cool Lo Pan Temple (with its photogenic roof) -- and that when I visited the area a couple of years ago, I thought it to be pleasantly picturesque!
On my latest visit to Ching Lin Terrace (which I recognized only because of the road sign that I saw in the film is still there on a corner of this backstreet!), I got to laughing at how unlikely a location for a horror movie it now looks, at least during the day, and wondering how many of the area residents know of its movie connection -- and, indeed, how many of them care.  And yes, I admit it: part of me would love to live in a place which has been a movie location -- though it's also true enough that a director friend has told me never to allow my apartment to be used for movie shooting as chances are that the film crew will end up trashing the place! ;b
Posted by YTSL at 7:20 PM

Ah, Ching Lin Terrace. Did you go there from topside or from the bottom? If you go down from Pofulam Road and if the timing is right, you might be able to see birds and Squirrels clustered around a tree and fence one terrace up from Lo Pan Temple (To Li Terrace).

Someone would usually put out some chow for the birds and the squirrels. I have only seen grey\brown squirrels there. But birds would be of more variety like Starlings, sparrows, spotted doves, and sometimes, bulbul.

The first time I went to Ching Lin Terrace, it was from Pok Fu Lam Road, the second time from closer to sea level at Victoria Road. Didn't see squirrels but heard and saw birds. That part of Kennedy Town really is on the quiet side and really pretty pleasant, isn't it? :)