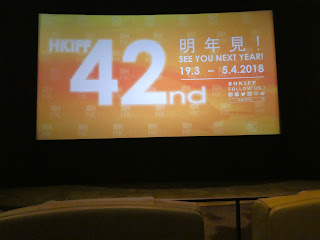 
One and a half weeks after the 41st Hong Kong International Film Festival drew to a close, its opening film is already playing in local cinemas.  And while a number of other HKIFF entries (including The Sleep Curse and Personal Shopper) are scheduled to follow Love Off the Cuff into Hong Kong multiplexes, that won't be the case with any of the three offerings from the African continent that I saw at the this year's fest.


Although I can see that Mimosas might seem too art house to play in a commercial theater and Hissein Habré, A Chadian Tragedy's subject matter would seem too far removed for most Hong Kongers to care about, I actually think that Egypt's Foreign Language Film Oscar nominee would resonate with certain sectors of local society.  In addition, director Mohamed Diab and his crew (chiefly cinematographer Ahmed Gabr, stunt coordinator Andrew McKenzie and editor Ahmed Hafez) deliver a technical masterclass -- involving both the impressive staging and shooting of much action in a small space, and incredible riot scenes that I had trouble believing were not real -- that most any filmmaker, especially those with limited budgets, surely would love to be able to emulate, if not replicate.


Set a couple of years after the Arab Spring, Clash shows a country that continues to be in turmoil and deeply divided between clashing factions of society whose members passionately believe that their side is in the right and will (eventually) prevail.  With military rule in effect, it's hard for foreign onlookers to discern if the uniformed men charged with upholding order in the streets are from the army or police.  And it seems just as difficult for those soldier types to distinguish whether someone is a bona fide journalist or foreign spy, and between friend and foe.


Thus it came to be that, in short order, an Egyptian-American Associated Press journalist (Hani Adel) and his photographer (Mohamed El Sebaey), pro-military demonstrators (including a head-covering-less female nurse (Nelly Karim), her husband and teenaged son) and members and supporters of the Muslim Brotherhood (including a modestly attired 14-year-old girl-woman (Mai El Ghaity) and her frail-looking father) all get locked up inside an 8-square-meter police truck whose barred windows are open enough to give people glimpses of what's happening outside but, especially in the hotter parts of the day, threaten to not be able to let in enough air for everyone stuck inside the truck to breathe.


While it's difficult to remember all their names, it's amazing how distinct many of the characters stuck in that police truck do end up being; and how they collectively come to represent a diverse as well as vivid portrait of Egyptian society capable of emotionally bonding over certain things one minute but also clashing aggressively over something else the next (and vice versa).  As expected, political, religious and gender differences rear their heads.  But further layers of complexity are added to the picture when such as a normally privileged resident from a gated community and a homeless man are placed in the same small space, and an American-born ethnic Egyptian who tells of his late father's love-hate relationship with his native land sees that the listening Egyptians clearly can relate with those mixed feelings.


Among the tragedies that Clash lays bare is how it is that divergent political views can tear families apart and that the road to what looks to be a hell on earth can be paved with idealism and good intentions.  As for whether the film is in effect a cautionary tale against political rebellion and revolution: there are those who will come away from a viewing of it feeling that “I never want my country/city/etc. to descend to this type of political chaos and insanity”; but I think it may well be the case that there are others who will optimistically decide that "it's darkest before dawn" and that out of chaos and clashes will eventually come a better tomorrow.